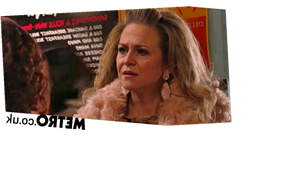 Linda Carter’s (Kellie Bright) alcoholism in EastEnders has spiralled out of control in recent months, leading to the decline of her and Mick Carter’s (Danny Dyer) marriage.

Her drinking has repeatedly endangered son Ollie as of late, and sadly shows no sign of stopping.

It looks as though it could even lead to fatal consequence during this week’s 35th anniversary special, which kicks off tonight.

Bosses have promised shows ‘that will go down in EastEnders history’ but could Linda end up on the wrong side of history?

Is Linda leaving EastEnders and does she die?

This week, Mick and Linda will reach a crisis point, which comes to a head during the much-anticipated boat party.

Despite freshly signing her divorce papers to Mick, Linda is in a celebratory mood and everything starts off well.

That is until she spots Mick in the company of Whitney Dean (Shona McGarty), prompting her to get paranoid and tell the bus to leave without them.

Once the bus gets there, the drink is flowing on board the boat, and Linda will leave people worried when she drunkenly teeters close to the edge of the vessel.

However, a preview of tonight’s episode will show Mick and Linda seemingly trapped in the interior of the boat.

How they got there is not clear, but as the water level rises and Linda screams that she is going to die, she appears to be stuck as Mick tries to help her.

The boat is then rocked by the noise of alarm bells, and their situation looks dire as they clutch onto one another.

Actress Kellie Bright told This Morning her character will ‘get wet’ but refused to spill any further details.

She told hosts Holly and Phil: ‘It’s the most epic week that I have ever been involved in on the show,’

She continued: ‘I can tell you that it centers around a party on a boat and I get wet,’ Kellie confirmed. ‘The Grim Reaper does stalk that boat, I can say that.’

The episode is the first of several which will focus on the day of the ill-fated boat party.

Other strands will see the Mitchells take on Keanu Taylor (Danny Walters) for a final showdown while Ian Beale (Adam Woodyatt) will seek revenge on Dennis Rickman (Bleu Landau).

EastEnders’ anniversary is this week and the episodes kick off tonight, Monday 17 February at 8pm on BBC One