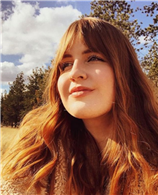 Isabel Roloff is simply done with the haters.

And the losers out on the Internet, who have never met her and who never stop to think about anyone else’s feelings and who simply hide behind their screens and write cruel things.

Isabel Roloff has had enough of them.

The former Little People, Big World star has been vocal for awhile about a number of crucial and personal topics.

She’s discussed her mental health…. her previous eating disorder… and the abuse she has sadly often taken online.

The 25-year-old wife of Jacob Roloff, for example, recently broke some unfortunate news on her Instagram Story.

After the photographer from her 2019 wedding ceremony, Monique Serra, re-shared a photo of Isabel smiling with all of her friends out in a sunflower field on her big day, Roloff remarks on how “happy” it made her.

She then explained that this wasn’t always the case.

“Fun fact, I avoided sharing my wedding photos for a few months after our wedding because I got so much hate surrounding how I looked that day,” Isabel wrote online.

“Now, two years later, I see these and I’m like…

“I looked so beautiful why did I ever let anyone make me think otherwise?!”

But it’s also totally normal and understandable for someone on social media to be affected by the criticism she constantly reads in her mentions.

For whatever reason (probably just because people can really suck), Isabel has often been victimed by body-shamers in particular.

“Today I read the comment, “Not shaming, but Izzy is very large compared to how she portrays herself in her Instagram photos.” And my heart sank,” Roloff wrote on May 1.

Continued Isabel, trying to turn the tables on these trolls:

“Not because it hurt me personally, but because how sad for them. They probably have a mother, cousin or friend who struggles with their body image and this is their thought process.

“One minute they say not shaming, and the next minute they are actively fat shaming. This is where we are at still. A person existing in their body is open for discussion.

“As if people living in bigger bodies owe it to the public to show off their most unflattering angles.”

Isabel has candidly told followers about her anxiety attacks and about her history of depression.

So you can only imagine how challenging it’s been at times to deal with total strangers making fun of her figure.

“Naturally, I would like to appear smaller,” she admitted last month.

“This is because I’m still working through years of internalized fat phobia in my own mind. It’s interesting because this is actually something I think about all the time.”

“Meeting new people from the internet gives me so much anxiety, because that’s all I think they will notice,” Roloff confessed, quoting these new people and adding that they say she looks different in her photos:

“We’re only going to pick flattering photos of ourselves, or at least that’s still how I use this space.

“Maybe I have been doing myself a disservice all along.”

Concluded the retired reality star, ending on a positive and admirable note:

Maybe it’s time I stop hiding here to appear smaller, because in the end that is MUCH deeper than my body size.

So here’s a photo of me, at an angle I don’t find particularly flattering, laughing so hard you can see my double chin which appears every time I laugh.

Because joy over perfection is what really matters to me more anyway.