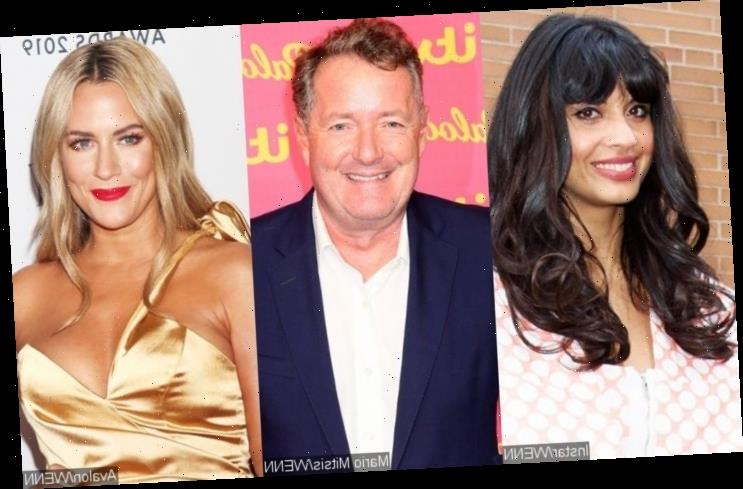 Calling the ‘Good Morning Britain’ host the ‘industry’s most problematic’ person, the ‘Good Place’ alum accuses him of selling a dead friend’s private messages for clicks.

AceShowbiz –Jameela Jamil is on a Twitter war again with Piers Morgan again over his latest tweet about the actress. On Sunday, February 23, the British TV host shared Caroline Flack‘s messages to him prior to her sudden passing in which she aired out her frustration at “The Good Place” alum, and Jameela did not waste any time to clap back at him.

On his tweet, Piers wrote, “Jameela Jamil is having a lot to say about online harassment, so in the interests of balance, here is a message Caroline Flack sent me last October after the same Jameela Jamil led an online pile-on against her regarding a new TV show she was doing.” In a screenshot of the private messages, the former “Love Island” star confessed to Piers that she was “struggling with Jameela” because of “the hate she aims at me.”

Jameela, however, denied that she targeted Caroline and claimed that she was criticizing the late star’s new show “The Sujury” instead. “I simply said I found the show ‘surjury’ (not her) problematic for kids to watch. And that love island needed some more diversity. Both times Caroline instigated debate with ME even though I was not targeting or blaming her at all. I always just politely explained my point,” she tweeted in response to Piers’ expose.

She went on blasting the “Good Morning Britain” host for using the late star to harass her. “Piers Using a dead woman who I was friends with, as a weapon to try to create further harassment for me…” She called Piers “this industry’s most problematic” person and accused him of selling his “dead friends private messages for clicks.”

The 33-year-old presenter/model later said that she would not further engage in the debate regarding Caroline’s private messages to Piers “out of respect” for the late actress because “she can’t respond or speak for herself.” She additionally claimed, “She [Caroline] would be disgusted her personal messages were shared and weaponized against a woman, by a bullying parasite she thought was her friend.”

Back in October, Jameela criticized Caroline’s Channel 4’s show “The Sujury” for which she’s tapped as the host. “This is why I said it was like Black Mirror @carolineflack Because it’s a VERY surreal concept that (perhaps unintentionally) will prey on people’s insecurities,” she tweeted at the time.

Caroline then defended the show, saying, “As you know self image is a complicated, sensitive and personal subject. At the heart of this show are people not contestants who have sought help to want to better them selves in their own eyes. Their stories deserve to be told and not ridiculed online.”

“The Sujury”, which was originally planned to air in 2020, was canceled in the wake of the presenter’s tragic death. She committed suicide by hanging in her flat in Stoke Newington, London on February 15. She was 40.

Before Piers accused Jameela of attacking Caroline, the longtime partner of James Blake opened up on how recent speculation about her own physical and mental health “triggered [her] to a point of near death.” In a lengthy statement, she said, “I have a fragile past with suicide… Our lives are hard enough with gaslighting and abuse and I’m glad at least we know we have each other because all this s**t is out in the open.”