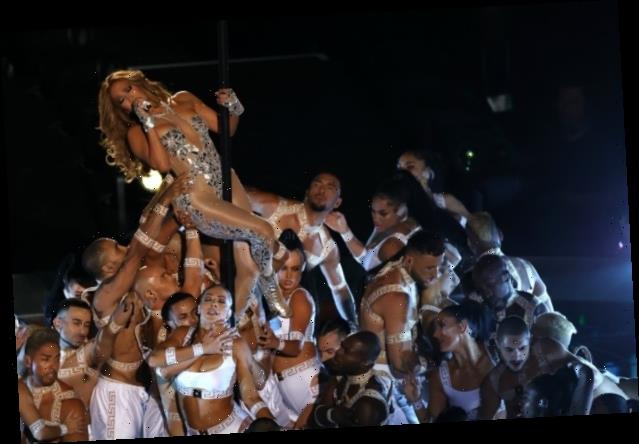 Jennifer Lopez put her “Hustlers” training to good use during the Super Bowl LIV halftime show, swinging around a pole while performing her greatest hits.

Shakira kicked things off in a fiery red dress, which she peeled off piece by piece as her performance progressed. The Colombian singer then showed off her guitar-playing prowess before performing “Hips Don’t Lie” with her signature midsection moves.

Lopez appeared center stage atop a pole, but that was just a tease as she descended to perform “Jenny From the Block.”

She then stripped down to a silver jumpsuit before hopping back on a pole, holding poses both vertically (see above) and horizontally in tabletop position — moves she learned from a real-life exotic dancer for 2019’s “Hustlers.” Lopez earned a Golden Globe nomination for her portrayal of a street-smart stripper.

Lopez’s daughter with singer Marc Anthony, Emme, joined her mother to sing “Let’s Get Loud.” Lopez then unfurled a Puerto Rican flag, a nod to her heritage.

Last 28 Super Bowl Halftime Shows Ranked, From U2 to JLo and Shakira (Photos)

How did Jennifer Lopez and Shakira stack up?

Before this show, young ‘uns were celebrating the end of the halftime show being owned by the “retirement home.” Afterwards, the old folks were smugly smirking. The Peas were absolutely abominable, with stiff choreography and mailed-in vocals that made The Who seem 40 years younger. The absolute worst moment came when Slash arrived to save the day, only for Fergie to commit a cardinal sin against rock by mangling “Sweet Child O’ Mine.” Later in 2011, the Peas’ new album got panned, their motion-sensor video game bombed, and by year’s end, they announced they were going on hiatus.