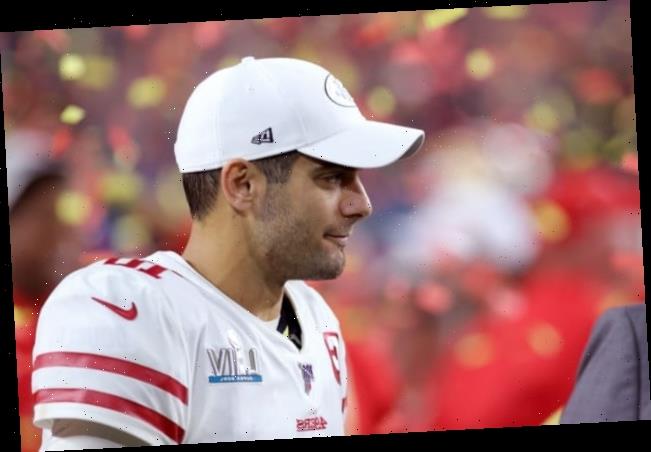 Due to some rather terrible play in the fourth quarter of Super Bowl 54, Jimmy Garoppolo and the San Francisco 49ers lost to the Kansas City Chiefs by a score of 31-20 on Sunday night.

Indeed, Garoppolo did not come out on top in this all-important affair.

But perhaps he can take solace in the following fact:

An endless array of women around the world would love for him to come out on top of them.

In a between-the-sheets-type of situation.

If you know what we mean!

What we mean is this: Jimmy Garoppolo is very handsome and many non-regular football fans discovered this while watching the Super Bowl and are now wondering:

Is this guy single? What’s his deal? Is there any chance I can date him?!?

We can’t answer that final question, but here’s what we can report about Garoppolo:

He was selected by the New England Patriots during the second round of the NFL draft in 2014 and then served as Tom Brady’s backup quarterback for three seasons before getting traded to the the 49ers in October 2017.

The handsome signal-caller learned a lot from the best to ever do it, too.

“I was going to watch and literally absorb everything I could from him without being an annoyance,” Garoppolo told Bleacher Report in July 2018 about Brady, adding:

What about romance, though? Did Garoppolo absorb any love life lessons from a sixth round draft pick who eventually wed Gisele Bundchen?

Now, for the important question: Is Garoppolo single?

He was romantically linked the model Alexandra King in February 2018 when she called him her “valentine” via Instagram.

The following month, the pair were spotted holding hands at Disneyland and were then seen making out in San Jose at the end of June 2018.

When asked by Bleacher Report about the relationship, however, Garoppolo said having a girlfriend was “news to me.”

Garoppolo, meanwhile, also made headlines in July 2018 when he was spotted with adult film star Kiara Mia… three weeks after he was previously seen with King.

“Jimmy and I had an amazing dinner, and he treated me with so much respect, and class. Honestly, we’re friends,” Mia told TMZ at the time, adding:

“I can promise the 49ers that they will make Super Bowl and win, because everything I touch turns to gold.”

In other words: The two were totally doing it, but perhaps were never an official item.

What does all this mean for women (or men!) who are curious about Garoppolo’s romantic status?

He appears to be both single and ready to mingle… with adult film stars, with women who slide into his DMs, with almost anyone, it seems.

Based on one of his final failed passes in the Super Bowl, however, an overthrow to Emmanuel Sanders, it also seems as though Garoppolo has trouble going deep at times.

Might wanna keep that in mind if you’re thinking of asking him out.