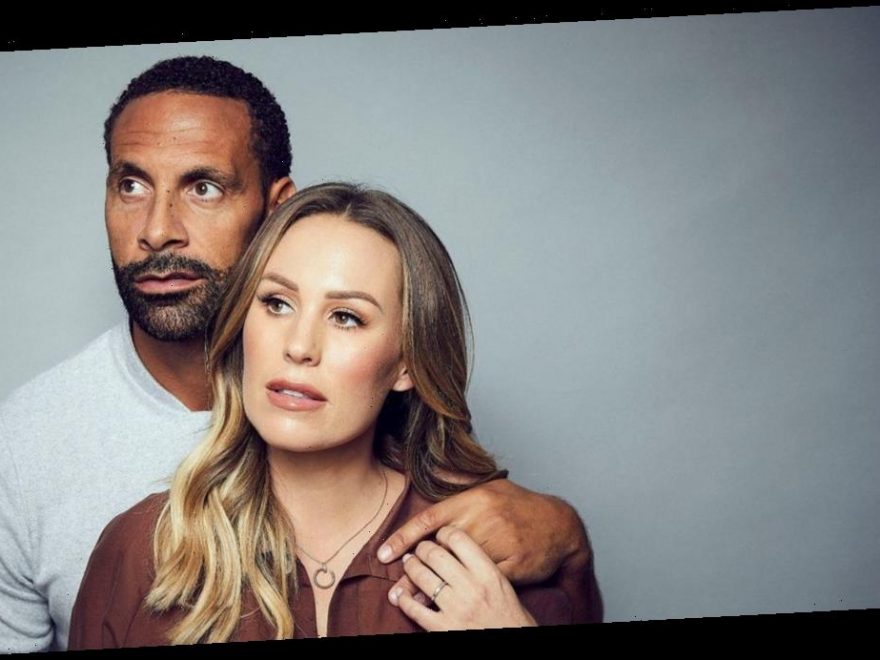 When Rio Ferdinand bravely let the cameras film him in the aftermath of his wife’s death from breast cancer in 2015, he had little idea of the huge impact the documentary would have.

So when the former Manchester United ace started a new relationship with TOWIE’s Kate Wright and she struggled desperately to fit in and please everyone, he felt filming the process of becoming a step-family was important.

The 2017 BBC documentary, Being Mum and Dad, saw the ex-England centre-back struggling to cope.

Rio said: “I knew from the one before – grown men had come up to me and were just crying. I was trying to explain to Kate how therapeutic this is.”

The children’s loss of their mum Rebecca was further compounded by the loss of their grandmother Janice, Rio’s mum, also from cancer.

Stepping in with no experience of children and an army of anxious relatives who weren’t sure if she was the real deal, proved a tough ask for Kate. She says: “I just felt like I wasn’t accepted. I just felt like I couldn’t live up to the memory of Rebecca and I was constantly compared.

“And I wanted to be able to be me. You know, I made a lot of mistakes at the beginning, because I wasn’t a mum.

“And I felt like every mistake I was making was being judged and I found that really difficult. I just felt like I couldn’t be me. And without being me, I couldn’t look after the children properly. I felt like I didn’t get any help.”

In one scene at the start of the new BBC film, Kate is shown crying as she writes her own poignant message to Rebecca in a Mother’s Day card to be left at her grave, thanking her for letting her look after her children.

Kate felt, if they weren’t judging her, Rio’s family and friends were ignoring her. “I found everyone would say, ‘how’s Rio? How are the kids? Are they OK?’ And I’d be like, ‘I’m struggling – hello.’

“I think no one really took me as a person, they just didn’t communicate with me. And I felt like an outsider.”

To their credit, both Rio and Kate worked very hard to overcome the problems they were faced with, by giving reassurance to family members who felt the children couldn’t take any more pain in the event their relationship didn’t last.

But some family and friends were openly hostile to the idea of Rio moving on with another woman – who has since become his wife.

He says: “With time, you understand everyone’s feelings and their different opinions on the whole situation of me and Kate being together, and what it meant to the kids. Is it quick? Is it too soon?

“Everyone has got an opinion. But it took us a while to understand it’s really our opinions that matter in our house. And we’re just going to shape our lives together and make it a happy home for the kids to be confident and happy.

“That’s probably what kept us up a lot at night was relationships with friends, family. It was really, really hard to navigate our way through.”

Kate, 28, feels being from TOWIE didn’t help her to be accepted. “I think we all judge everyone. And I have come from a reality TV show. There’s a lot of drama. I don’t think you could always see the real me on there. So definitely, I was judged for that. You know, ‘she doesn’t look like the perfect person to look after three children’. But once everyone got to know each other, it’s a different view.”

One of the worst culprits – by his own admission – was Rio’s dad Julian.

Rio admits he had to be “brutal” with his father for being “cold” to Kate. His dad explains in the film that his stand-offish behaviour was to protect the children, because he wasn’t sure if Kate was in it for the long haul.

“My concern is the kids, not if she is feeling insecure,” he shrugs. “If she was not strong-minded she would have walked away. I’m their grandad, I’ve got a right to make sure they are fine.”

Speaking last week, Rio said he’d had strong words with his dad. “I told him, I’ve made a decision I’m going to go forward with this relationship. If it fails, which many relationships do, just be there. I don’t need you to almost make my relationship a negative situation, where it’s stressful because of you.

“Just be there for me when something happens. If it doesn’t, we can all clap hands and get married and go into the sunset.”

It was a similar scenario with Rebecca’s family, who took a while to come round to the idea of the blended step-family that has been created.

“With Rebecca’s family, it was very, very difficult at the start,” Rio admits. “It was hard for them to accept someone new coming in. They’re grieving. Everyone’s grief is at different rates, at different points.

“But it’s all about communicating,” Rio reasons. “You get to the bottom of issues and you work them out.

“We’re now at a very, very different stage, where they were around for Sunday dinner the other day at our house and everyone is sitting there having a drink. The kids are flying about like a normal family.”

Kate agrees: “A lot of people have come around. But also, we’ve become stronger and we’re much more focused on us as a five – other peoples’ opinions don’t matter as much.

“We’re moving forward, our relationships with everyone have healed. I think the kids are happier and that’s a really big factor – everyone can see how happy the children are.”

She concedes she put far too much pressure on herself to get everything right first time. These days she tries to cut herself some slack. “I thought that they’d been through so much that I just need to make everything perfect and I put an awful lot of pressure on myself to try and do that.

“And then when it failed or when I forgot a school bag or a PE kit, I would get myself in such a state.

“You’re running around like a lunatic and you do forget things and that is OK. So I’m trying to be kinder on myself. And I think it’s easier because I don’t feel like everyone else is judging me now.”

Having got married to Rio, 41, in September, Kate is now firmly one of the family, and is loving her role.

“I think I always felt like a mum, but I was embarrassed to say it in front of certain people,” she muses. “I’d say, ‘oh, I’m their step-mum’. But I think it’s about love and care and being there for the children every day, which I am.