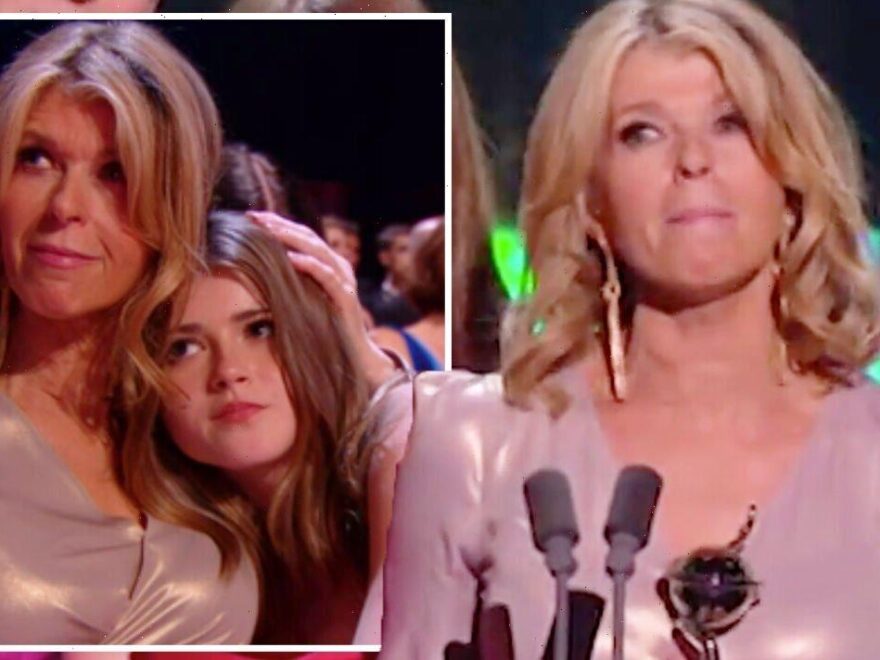 Kate Garraway, Katie Price, Julia Bradbury, Paddy and Christine McGuinness and the late Tom Parker and Kelsey were all in the running for the award at this year’s National TV Awards. However, while a number of ITV viewers were predicting Kelsey would take to the stage for her late husband and The Wanted singer Tom’s project, Inside My Head, Kate’s Finding Derek won the award.

This also marked the second time in as many years Kate had won an NTA for her work exploring her husband Derek Draper’s battle post-Covid.

The Good Morning Britain host looked visibly stunned as she hugged daughter Darcey before making her way to the stage.

However, Kate also took the time to show Kelsey her support on her way to the stage too, cuddling Tom Parker’s wife.

As Kate took to the stage, the emotions became clear as she thanked viewers and ITV before updating viewers on Derek’s current state.

Despite returning home in the ITV documentary, Derek is now currently in hospital receiving further treatment.

However, Kate told fans at home she and her family “hoped to have him home soon”.

And @KaylieBennett2 commented on the hug: “Seeing Kate Garraway and Tom Parker’s wife hug literally broke my heart, it was so sweet #NTAs.”

Elsewhere, @Charlie017463 echoed: “Kate running straight over to hug Kelsey. That’s her all over. Such a lovely person #NTAs.”

While Sarah Elizabeth added: “Kate looked shocked and IMMEDIATELY went to hug Kelsey – even she didn’t think she should have won that tbh #NTAs.”

User @SomethinClub added: “Sad that Tom’s documentary didn’t win but it was so lovely of Kate to go over to Kelsey and show her some love #NTAs.”

Once she got on stage, Kate told fans: “I’ve got my daughter here, Darcey, and we managed to speak to Derek.

“He is back in hospital at the moment, fighting on so incredibly and we’re hoping he’s coming home soon.

“But Darcey represents all our family, all the Drapers, Billy, everybody.

“I want to thank Derek for his incredible fighting spirit, we love you.

“I want to thank ITV for being so brave to put something out which actually is touched in all the incredible documentaries, which is about care.

“We have a care crisis in this country but we don’t have a crisis of love.”

The NTAs is available to stream on ITV Hub now.