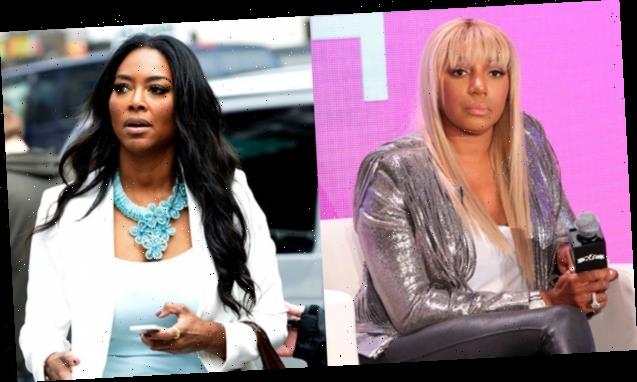 Kenya Moore & NeNe Leakes’ feud has bled into the world of social media as the twirl queen herself just revealed that the OG ‘RHOA’ star has her blocked on Instagram!

Page not loading… for real. Kenya Moore, 49, spilled a ton of delicious tea when she revealed that her enemy NeNe Leakes, 52, has her blocked on Instagram. The mother-of-one spoke about this in an IG post shared on Friday, January 24, that was part of a throwback photo from the Forever Relevant Ball that she hosted during her debut season in 2013. Others in the shot, which featured several past and present RHOA cast members dressed up as icons like Tina Turner, 80, and Grace Jones, 71, besides Kenya and NeNe were Cynthia Bailey, 52, Kandi Burruss, 43, Phaedra Parks, 46, and Porsha Williams, 38. “#FBF who remembers the #ForeverRelevant ball?”, Kenya wrote before adding, “#RHOA couldn’t tag ‘everyone’ bc it’s blocked no shade.” All the ladies in the pic were tagged… minus the one and only NeNe!

It shouldn’t come as that much of a surprise that the Swagg Boutique owner has Kenya blocked given how vicious their feud has become recently. Fans finally got to see see the massive cast brawl that Bravo’s been teasing since before season 12 premiered on Sunday, January 12, — and, it was nothing short of pure insanity. The two women almost came to blows amid the others fighting about a myriad of topics that centered on who the “snake” was that allegedly secretly recorded Cynthia slamming NeNe in a private conversation.

Kenya came for NeNe’s appearance after the episode aired by tweeting, “Does she own a mirror? On her 6th nose job always coming for the pretty girls on the show.” Wendy Williams, 55, who made amends with the mother-of-two in 2019 after their years-long feud with one another, defended her pal on her talk show by saying, “First of all, I think NeNe looks great, OK! And, it’s never a read Kenya, if the person you’re trying to read already exposed [themselves].”

Tonight on an all new #RHOA @cynthiabailey10 the future Mrs. Hill gets engaged! No one is happier for her than me. A lot of pettiness happens between us this season but no one can come between us. My #1 from day 2 LOL ? #coochiecrack #RHOA #riders #2queens

The constant arguing on the show may have taken its toll on its OG star. “NeNe is really seriously contemplating more so than before if she’s going to be doing another season of Housewives,” a HollywoodLife insider dished EXCLUSIVELY on Sunday, January, 19. “The show is really a job for her now and she doesn’t love it like she used to.”