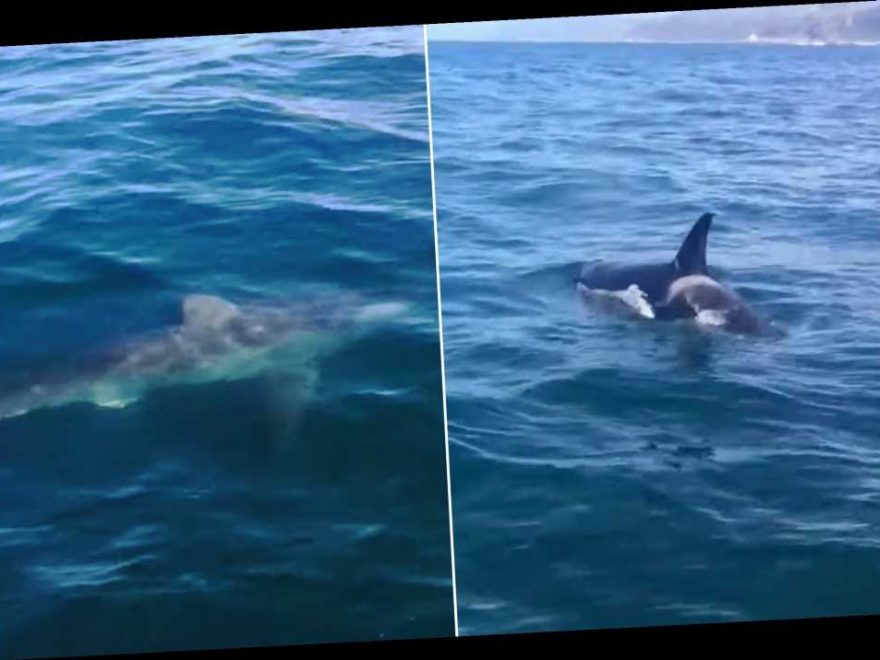 They’re not called killer whales for nothing.

A pair of orcas were filmed apparently hunting a great white shark off the coast of South Africa. The footage was filmed by marine tour guide Donavan Smith, who was leading tourists in a boat near Knysna, about 250 miles from Cape Town.

“This is amazing. This is special stuff,” Smith can be heard saying in the two-and-a-half minute video, which he posted on his Instagram and YouTube accounts last week. “There’s a big great white here in the water. They come and they hunt great whites.”

The clip shows two killer whales swimming and peeking their dorsal fins several feet from the tour group. Meanwhile, a nearly 12-foot great white takes cover underwater, near the tour boat’s bow. Despite the “big, monster great white,” Smith tells his guests that orcas are known to feed on sharks.

“It’s a shark they are hunting,” he says before the footage ends, and before the shark’s fate is revealed. “They actually bite the tails off [of the great whites] from the back.”

Killer whales are formidable opponents against the great white — long thought to be kings of the ocean — according to a 2019 study published in Nature.

“When confronted by orcas, white sharks will immediately vacate their preferred hunting ground and will not return for up to a year,” said Salvador Jorgensen, lead study author and researcher at the Monterey Bay Aquarium. This behavior was first observed in 1997 off the coast of San Francisco. Yet, South Africa’s orca population has long-eluded humans, according to University of Pretoria biologist Simon Elwen, who talked to National Geographic about the gruesome phenomenon last year.

In 2015, two killer whales arrived in the waters of False Bay, near Cape Town, where great white sharks had been known to hunt. Since then, there’s been a sharp decline in great white sightings there, with none spotted last year, The Times UK reported. Shark carcasses, which surfaced in 2017, showed orca-sized wounds where. the aggressive whales had apparently removed only the sharks’ livers

“Killer whales are adaptable predators and will rapidly learn new hunting techniques and so it is possible that new behaviors might spread through a population,” Simon Elwen, a marine mammal specialist at Stellenbosch University, told The Times UK.