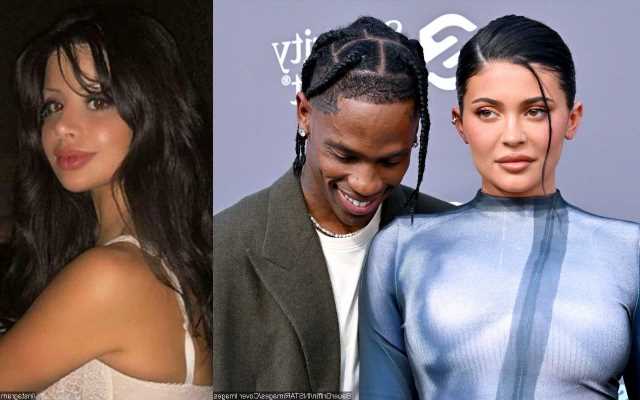 The cheating allegations first emerged after the ‘SICKO MODE’ rapper was joined by his rumored old fling Rojean Kar when he’s filming what appeared to be a music video on October 20.

After the cheating allegations emerged, Rojean, who goes by yungsweetro on Instagram, posted a photo of her with a cryptic caption that read, “tell her to be me for halloween since she wants you to love her so bad.”

Seemingly responding to Rojean’s post, Kylie turned to her own page to share a sexy picture of her posing suggestively on a bed while sporting black busty satin lingerie. “in ur dreams,” she captioned the post along with a red heart and fire emoji.

Many have since believed that Kylie and Rojean are throwing jabs at each other, with one noting, “Surprised Kylie is paying any attention to her.” Another added, “Kylie you too rich to argue with this lil birdie.” A third quipped, “She betta not compete where she can’t compareeee.”

“Imagine fighting ur doppelganger over a man. Sis quit fighting and put her on ur team,” someone opined. A separate social media user pointed out, “Kylie is literally way prettier that other girl looks slow.”

On Thursday, October 20, Travis and Rojean appeared to be hanging out together as she uploaded an Instagram Story that saw Travis filming what appeared to be a music video. The post prompted Internet users to speculate that the “SICKO MODE” rapper is cheating on Kylie.

Responding to the allegations, Travis said in a statement he posted on Saturday, October 22, “It’s a lot of weird s**t going on. An uninvited person was sneaking photos on what was supposed to be a closed set while I was directing a video. I’m saying this for the last time.” He further insisted, “I don’t know this person. I’ve never been with this person. So please stop with the continuous cyber games and the fictional storytelling.”

Slamming Travis’ statement, Rojean argued in a video she posted on her Instagram Story, “Okay, so what we’re not going to do is we’re not going to lie on me because…I’ve been good. I posted whatever f**king Story you guys wanted me to post.” She defended herself, “I pretended I didn’t know you, went along with whatever f**king narrative you guys wanted to no matter how much b***hest I got from it.”

“But to say you don’t know me and you’ve never been with me, when you’ve definitely been with me, when everyone’s seen you with me, when I have pictures and videos of you with me…c’mon. C’mon, sir,” she added. “Even this Valentine’s Day, I saw you, I ran out the door, and you had every single girl I know blowing me up, like ‘Trav’s asking for you, come back.’ Are we pretending that didn’t happen too? You cheat on that b***h every single night. The whole f**king city sees it.”

Travis, however, stuck with his claims. The “Goosebumps” spitter even unleashed a screenshot of a comment written by someone underneath The Shade Room’s post that contained the model’s videos. It read, “big cap. i’ve been working with travis for 8 years + i was on set all day as he was directing a video for another artist. this lady is delusional + she was not there with him. he does not f*k with her in any way. nothing else to see here.”

Travis, who shares two kids with Kylie, also shared an image from his Valentine’s Day celebration with the “Keeping Up with the Kardashians” alum. Alongside the photo, the “Astroworld” artist wrote, “If u wasn’t at this table on V day then u wasn’t with me.”