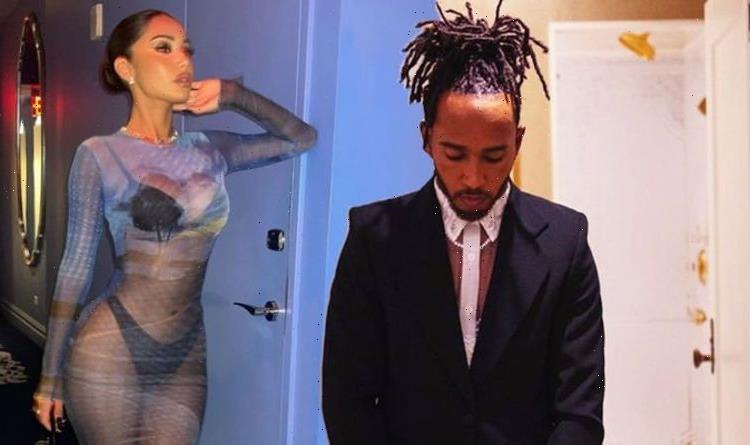 Lewis Hamilton, 36, was seen arriving back at his hotel with model Janet Guzman following the Met Gala 2021 afterparty in New York City. The Formula 1 driver headed to his hotel with his bodyguard in tow, before the OnlyFans model, 27, then made her way inside, according to reports.

She has since set her sights on OnlyFans, where paying subscribers can gain exclusive access to photos and videos unavailable on other platforms.

Lewis had worn a black suit for the Met Gala, before he changed into a navy jacket with his initial, ‘L’, emblazoned on the back for its ensuing afterparty.

He also sported a pair of bright yellow tracksuit bottoms and black shoes, and appeared to arrive at the bash with another woman.

Guzman, who joined him in the hotel, donned a black sheer garment that highlighted her incredible figure, in photos obtained by the Daily Mail.

She added height to her frame with a pair of black heels, while her locks were styled into an updo for the evening.

The model shared a sizzling snap inside the hotel from the evening’s events, typing: “Till next time.”

In response to her risqué display, her fans gushed over her see-through dress and praised her incredible figure.

And @Fashionofsully commented: “Your style is everything.”

Hamilton had earlier been praised for his own chic look at the Met Gala, pairing his unique black two-piece suit with structured loafers and a mesh shirt.

He had accessorised with a diamond chain, crucifix earrings, and two diamond bracelets.

Hamilton was joined on the red carpet by other sports stars, including American track and field sprinter Sha’Carri Richardson and Olympic fencer Miles Chamley-Watson.

The racing driver also gave three up-and-coming designers a seat at his table during the event, costing him around £30,000.

Red carpet host Keke Palmer asked Hamilton how his outfit tied into this year’s theme and he said that he felt “really, really fortunate” that Vogue Editor-in-Chief Anna Wintour had agreed to host his table.

He said: “I’ve brought four incredible, young, Black talented designers,” he said, “so we’ve got a great host of people tonight and it’s about just highlighting beauty and excellence and talent.”

After the Gala’s red carpet live stream ended, Vogue played a video with Hamilton talking more about his table and his work in the fashion world. “We’re living in a time where diversity and inclusion is so important and that’s something I’m fighting for in my industry,” he said.