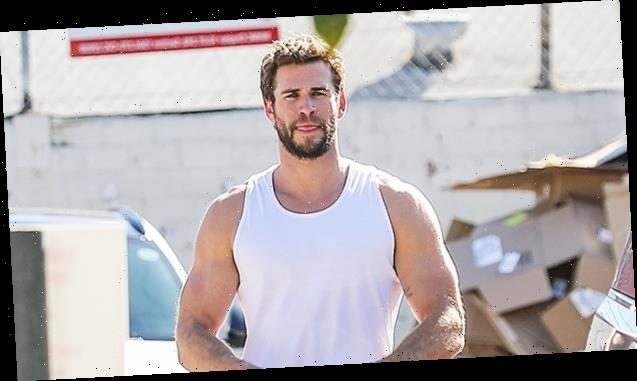 Liam Hemsworth’s toned arms and legs were on full display in a sleeveless white shirt and shorts! The actor returned to Los Angeles after a lengthy visit to his native Australia.

Liam Hemsworth, 30, is back on the grind! The Australian native was seen exiting a Los Angeles gym on Friday, Jan. 31 with his toned body on full display. Liam rocked a casual white tank top and green camoflauge shorts for the outing, showing off his defined, bulging biceps. The 6’3″ actor looked like he was in the best shape of his life as he strolled out of the fitness facility, also flaunting his sculpted legs and a grown-in beard. He finished his gym-ready look with a black pair of sneakers, and a casual, beaded bracelet as he opened the door to his black SUV. At one point, he could be seen smiling while on a call.

The sighting comes just four days after his divorce from Miley Cyrus, 27, was finalized on Tuesday, Jan. 28. While the paperwork — which cited “irreconcilable differences” is approved, the pair aren’t legally “single” until Feb. 22. The divorce comes just five months after the pair announced their shocking split in Aug. 2019, just weeks after they snapped photos at YSL’s mens fashion show in Malibu, California. “‘Just a quick note to say that Miley and I have recently separated and I wish her nothing but health and happiness going forward,” Liam shared on Instagram in August. While Miley and Liam’s marriage only lasted eight months, the pair have a lengthy romantic history, dating back to meeting as teenagers on 2009’s The Last Song.

Miley made her first post-divorce sighting while running errands in L.A.’s Los Feliz neighborhood on Thursday, Jan. 30! The “Party In The USA” singer looked classic and cool in an all-black ensemble along with a sky-high pair of leopard stiletto booties. She kept a demure look on her face as she walked around the area, hanging onto a Kreation Juicery bag, her phone and a black pair of sunglasses.

While Liam and Miley aren’t legally single, that hasn’t stopped the exes from moving on romantically. Liam was packing on the PDA with his new model girlfriend Gabriella Brooks, 21. The gorgeous brunette also hails from Australia, and was photographed meeting Liam’s parents Leonie and Craig just before the Christmas holidays. For Miley’s part, she briefly dated Brody Jenner‘s ex Kaitlynn Carter, 31, through August and September before rekindling a romance with longtime friend Cody Simpson, 22. Miley and Cody have been seemingly inseparable after they were seen kissing at an L.A. smoothie shop in October, and are reportedly even collaborating on music together.