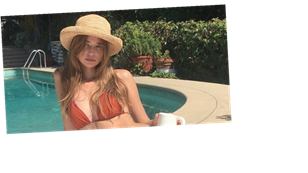 Last month Liam Hemsworth finalised his divorce from Miley Cyrus after only eight months of marriage. The Australian actor seems to have wasted no time in falling back in to a serious relationship. After a brief stint with actress Maddison Brown, the Hunger Games star has entered into a romance with fellow Aussie Gabriella Brooks.

Any doubts about whether the couple are together were firmly put to bed last month after pictures of the two kissing on the beach in Byron Bay, Australia, emerged.

Liam has even introduced the stunning 23 year old to his parents back in December. But he is not the only famous person that the star has been linked to. She dated The 1975 front man Matt Healy for four years until they split up last year. However, now she is Liam’s new squeeze…

Who exactly is Gabriella Brooks?

Gabriella is a model from Sydney, Australia. She was scouted at the age of 14 and is signed to agencies in Australia, America and Britain.

She has starred in campaigns for big brands including Topshop and Calvin Klein. However she is not just a pretty face because she studied Ancient History and Archaeology at Sydney University.

Aside from having a passion for Ancient history, she has also admitted to loving Zoology. Her love of animals is evident on her Instagram page. This is a passion we know Liam shared as he keeps many animals.

How did Liam meet Gabriella?

Although we cannot say exactly how the pair met, Liam did move back to Australia after breaking up with Miley.

It is likely that they met in Bryon Bay, where Liam and his family have houses, because Gabriella has been posting images the area to her Instagram long before they were photographed together.

Previously Gabriella has said that relaxing with friends on the beach is one of her favourite things to activities. She describes herself as "an adventurer" and says “I love the great outdoors."

However, in general Liam has been quite private about his new relationship aside from the beach make out session. This is in stark contrast to Miley who has gone very public with Cody Simpson, frequently posting images of them together on social media as well as often being captured by paparazzi.

Back in October she explained why this was the case on her Instagram stories, writing: “I refuse to recluse and ‘date’ from home ’cause A. That’s not fun B. Extremely uncomfortable/puts me in a vulnerable position….I would like to share an activity with someone I am dating and not be stuck at home with pretty much nothing to do but ‘Netflix and chill.’”