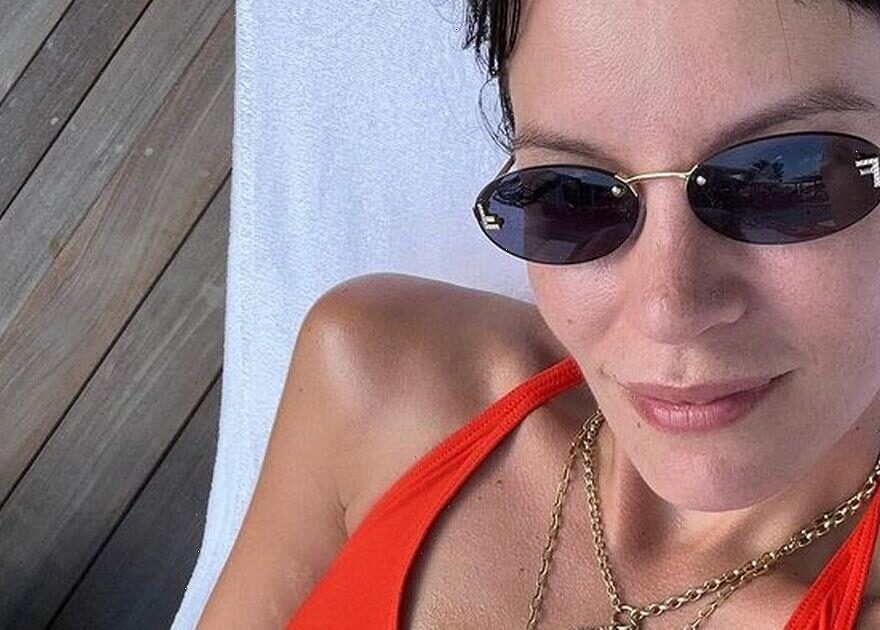 The star, 37, was enjoyed a lavish Caribbean break after jetting off to the island of St Barts with her husband David Harbour and daughters Marnie, nine, and Ethel, 11.

The singer can be seen enjoying some pool time with her actor partner David, 47, who stars in smash hit series Stranger Things, as she shared a snap of herself relaxing on a sun lounger.

READ MORE: Olivia Rodrigo brings out Lily Allen at Glastonbury for 'F*** You' dig at US court

She posed in a cheeky red halter neck bikini top and a pair of green bottoms, showing off her abs.

Lily shielded her eyes of the bright sunshine behind a pair of dark Fendi sunglasses and accessorised with a number of gold chain necklaces as she shot a subtle smile at the camera.

In another snap, she gave her Instagram followers a glimpse at the pool she was sitting by as she showed off her slim, bronzed legs.

Lily and David, who married in 2020, were also seen on a boat as they explored the Caribbean island and enjoyed the gorgeous weather.

During their day at the beach, David was seen going shirtless in a blue fish-print bathing suit as he went for a dip in the ocean

The pair married in a Las Vegas ceremony that was officiated by an Elvis Presley impersonator, with burgers from fast-food chain In-N-Out serving as their post-wedding dinner.

Through their marriage, David became the stepfather to Lily's two children – Ethel, 11, and Marnie, nine – who she shares with her ex-husband Sam Cooper.

“The girls absolutely adore him, and he's worked so hard to get to know them and build up trust over a sustained period of time,” a source told the MailOnline.

David portrays father figure Jim Hopper in Stranger Things and has previously said the role helped prepare him to be a stepfather to Lily's daughters.

In the show, Hopper reluctantly becomes a father figure to Eleven, played by Millie Bobby Brown, and David is able to draw stark parallels between his and his character’s lives.

“I'm very much a New York sort of city rat. I liked my freedom, my independence. And then it was really this part that did change a lot of that perspective,” he said on the That Scene With Dan Patrick podcast.

“The show sort of opened my heart in a lot of different ways, and one of the ways that it did was it started to make me realize how thin my existence was without a family,” he went on. “I feel like there was something in Hopper that had a deep need for family, and there was something in me that had it, too, but that I wasn't even aware of."