There are few things we enjoy here at Cosmo more than taking a walk down memory lane with our favorite celebs. There’s just something about reliving iconic scenes and roles (and learning about all the 🍵 spilled along the way) that just hits the spot. And this week, we sat with the one and only Lindsay Lohan—aka our cover star—and had her re-watch clips from her mega-hits like The Parent Trap, Georgia Rule, Confessions of a Teenage Drama Queen, and, of course, Mean Girls for Cosmo‘s series “The Breakdown.”

Some of the (many) things learned? In Confessions of a Teenage Drama Queen, Lindsay maaaaaay or may not have been low-key jealous about the fact that her co-star Megan Fox was allowed to get a spray tan for the role. Not only was Lindsay not allowed to get one, but she was *also* discouraged from dying her hair blonde since the movie head honchos wanted it to stay red. Obvi, the actor did what we all would have done at the ripe old age of 18 years old: she tried to subtly bleach it. Obviously she was caught, but it’s still iconic!

“Lola was so fun to play because she was just so passionate and such a nerd when it came to the things that she cared about,” Lindsay said. “And I was still so young and I remember Meghan Fox got spray tanned and I wasn’t allowed to get spray tanned and I was really upset about that. And I wanted my hair to be blonder for the character, but they wanted it to be more red. So I was trying to find a way that I could bleach it myself without them noticing, which I did and then they noticed.”

Other movie secrets Lindsay spilled? In Mean Girls, Lindsay pointed out that a lot of her scenes relied on pre-tape voiceovers, so she didn’t actually have very many lines! Lol, here’s me thinking back to how she carried the movie on her back even though her IRL dialogue was limited:

There’s tons more intel about these movies and others that Lindsay starred in throughout the years, so if you wanna know more about all of the wildy memorable moments of her career, check out the rest of her vid above. 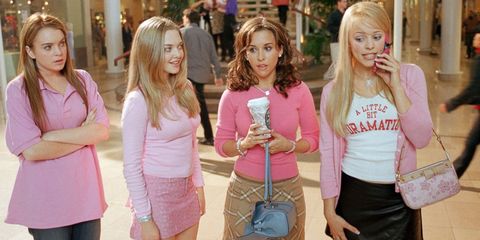 Oh, and make sure to read her *chef’s kiss* cover story, too!