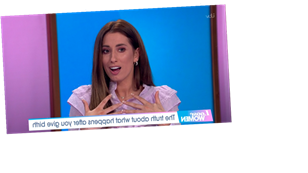 Christine Lampard was in the anchor's seat this afternoon alongside Stacey, Nadia Sawalha and Jane Moore.

The Loose ladies welcomed Eastenders actress Lacey Turner onto the show today to discuss her journey to become a mum, life with her seven-month old daughter Dusty, and her time working on the BBC One soap.

As well as talking about Lacey's role as feisty Stacey Slater, the ladies discussed the ABC's decision to reject an advert to be played during the Oscars from Frida Mom that shows what postpartum can be like for new mothers.

Mum of three Stacey, 30, confessed that she thought it was disgusting that the advert was deemed to have "too much nudity" for the pre-watershed slot.

A section of the advert was played on Loose Women before the panel discussed the contents.

The former X Factor star said: "The advert shows a virginal birth and the aftermath.

"Later on the women can be seen crawling to the toilet as if everything is going to fall out of their vagina."

Stacey, who has watched the whole advert, continued: "The only thing the advert didn't show was the first poo post-birth.

"It's the most scariest ever. I feel like my entire insides were going to fall out."

Getting involved in the debate, new mum Lacey, 31, added: "No one tells you how hard it is to go to the toilet after giving birth.

"I had cramps that I didn't know existed."

"The advert made me emotional. I can't believe they couldn't show it."

Lacey opened up to the loose ladies about being unable to celebrate her pregnancy with Dusty until she was 25 weeks.

"After my two previous miscarriages I just couldn't fully enjoy until I was around 25 weeks.

"I ignored it until I was 14 weeks and I had a scan every week. I was scared."