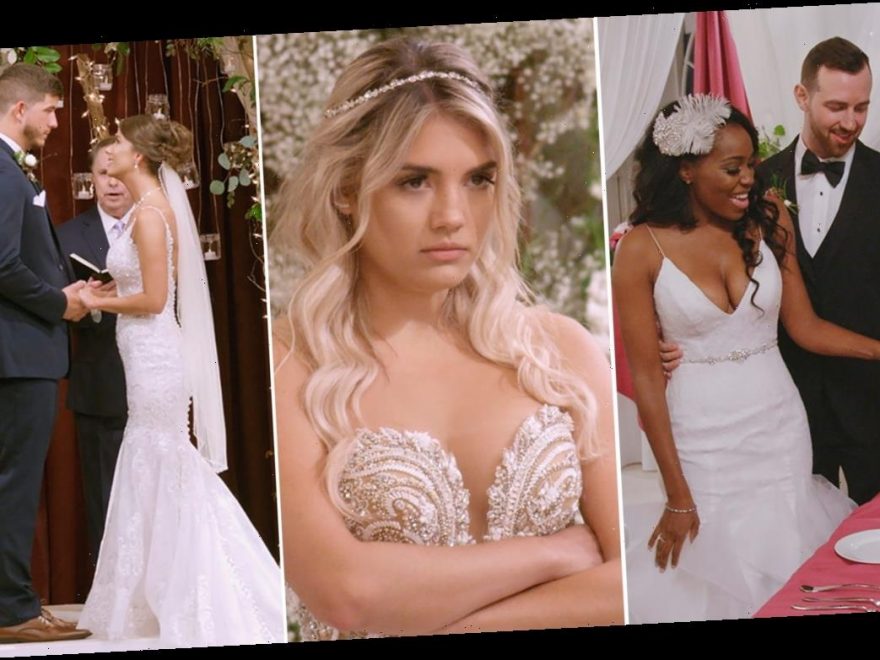 It’s the dating show that has everybody hooked. And if you were wondering what to do with yourself since it finished, you’re in luck! Because Love is Blind the Reunion is available to watch on Netflix from Thursday. The reunion episode will see all previous couples who began their journey in pods completely blind to what their match looked like gather around to discuss their time on their show and, for some, their lives as husband and wife. But if you’re wanting a little bit more info on the couples before sitting down to enjoy the reunion episode, here’s a roundup of where the couples are now, who’s still together, and who might have reunited…

WATCH: Amber confronts Jessica about her behaviour with Barnett

After a somewhat tricky journey to getting down the aisle, the final episode of the Netflix show saw Amber and Barnett tie the knot. Throughout their time dating, Barnett was being pulled from another direction, as fellow Love is Blind star Jessica also had her eye on him after their connection in the pods. In addition, Barnett also had doubts on Amber’s financial situation, and his family’s view on her. However, love conquered all and they’re still together to this day! But Amber isn’t willing to carry on without a fight. In a teaser clip for the reunion episode, the 26-year-old can be seen taking a swipe at Jessica’s behaviour, as a very awkward Barnett looks on. This is going to be juicy…

MORE: Love Is Blind is coming to the UK and we know you secretly want to apply

Amber and Barnett tied the knot and are still together

Lauren and Cameron were fairly solid from the start, so it’s perhaps unsurprising that the couple remain happy and together to this day. After a moment of uncertainty from Lauren’s side as they drew closer to the big day, the pair tied the knot in an emotional ceremony and became husband and wife. And, now the couple are clearly still just as content. After the show, Lauren told Elite Daily: “Oh my God, we’re so happy. It’s just, like, every day we learn more and more about each other, and we honestly fall more and more in love with each other.” Cute!

Giannina (Gigi) and Damien’s big day was the first to be shown in the series, and was also arguably the most dramatic. The couple had a few fiery rows before the walked down the aisle, with many speculating whether they’d make it. And when Gigi reached the altar and said yes to Damien, she was met with a sting when Damien said “I do not.” Despite not wanting to marry Gigi, Damien did express his love for her in the finale and said: “I can’t say it’s over, we may need time apart. But it doesn’t mean we won’t be part of each other’s lives again. I would like to think so anyway.”

MORE: This is the hotel where the Love Is Blind cast stayed in Mexico – see all the photos

Could Damien and Giannina rekindle their love?

The show’s creator, Chris Coelen, also hinted to Metro Online that the couple may have reunited. “There was only one couple that broke it off that has attempted to re-engage and that’s Gigi and Damien. And we’ll see what happens with them. We’ll see.”

After Jessica said “I do not” to Mark on their wedding day, Mark was left heartbroken. So it’s no surprise that the two have gone their separate ways and continued to live their lives apart. Speaking to the New York Post after the show, Mark revealed that Jessica had not spoken to him since the show, despite him reaching out to her. “I didn’t hear back, but to me, it’s just sending love out there.” Sometimes it’s just not meant to be!

Mark was heartbroken after Jessica said no to marrying him

Kelly told Kenny on their wedding day that she loved him, but could not marry him. The news clearly came as a shock to Kenny, who was keen to make Kelly his wife, and he even repeatedly asked for the cameras to stop rolling. The two then went their separate ways; Kenny has since moved to North Carolina while Kelly stayed in her home state Atlanta.

Despite falling in love in the pods, Diamond and Carlton’s romance was short-lived and ended in Mexico before they made it to the wedding day. After Carlton opened up about his sexuality, Diamond felt that he wasn’t honest from the get-go. The pair had many heated discussions and after a fiery row by the pool, the couple called it a day.

Diamon and Carlton didn’t make it to their wedding day