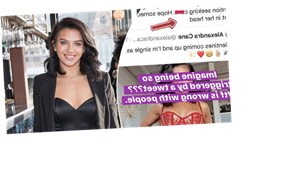 Love Island star Alexandra Cane has received a vile threat online after posting a tweet, with the cruel troll claiming they wished someone would put a "bullet in her head".

The stunning star, who competed in the 2018 series of Love Island, received the horrible comment after tweeting a short clip of herself standing in a lacy red underwear set. She captioned the footage: "Valentines day coming up and I'm single as f**k", accompanied by a string of emojis including a peace sign, a smiley face, a red heart and a star.

The harmless post clearly angered another Twitter user who re-shared it, writing: "The most annoying prick in the world why is she all over my timeline every single day the attention seeking c**t. Hope someone puts a bullet in her head".

The reality star, who has recently undergone a fitness transformation, was quick to call out the troll posting his comment to both her Twitter and Instagram, alongside the caption: "Imagine being so triggered by a tweet??? Wtf is wrong with people."

The toxic tweet has since been taking down, but not before many fans leaped to her defence.

One follower wrote: "I reported it," while another wrote, "I don't think you are on my timeline enough to be honest."

Aside from the cruel comment Alexandra has made many positive steps of late, having started her own fitness app called Happy Body Plan which aims to help users change their bodies in just 90 days.

Speaking exclusively to OK! online last month, the Love Island star also explained that she chose to break up with her boyfriend five months ago to focus on herself.

Love Island stars: Past and Present

The 28-year-old revealed she split with Adam Theobald because: "I needed to take some time and focus on myself because I’d really lost myself. I’m just working on me at the moment and I feel really great for it."

The former make-up artist, who has lost two stone since embarking on her fitness journey admitted she was happy single but would not rule out a reunion, stating: "We’ll see what happens in the future. I’m very career driven at the minute.”