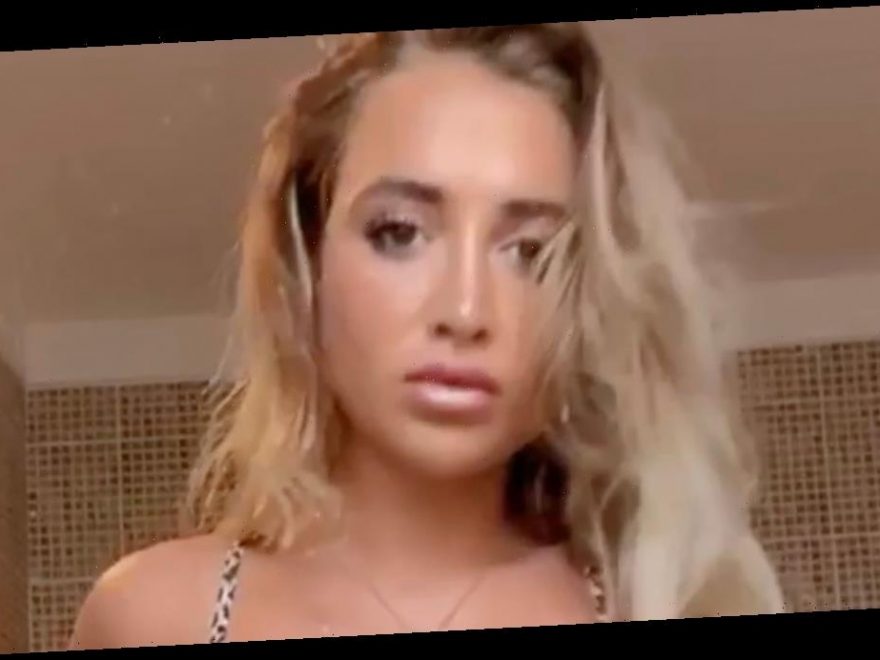 Georgia Harrison dropped jaws as she ditched her underwear in an almost nude selfie.

The 25-year-old reality star, who starred in Love Island 2017, isn't one to shy away from the camera, and her latest post certainly proved this as she went topless.

She drove fans wild with desire as she wore just a pair of lilac fishnet tights, ditching her underwear in the sexy exposé.

Georgia, who also starred in The Only Way Is Essex, teased fans with the steamy display as she covered her chest with her hands after she ditched her bra.

Her side-boob was flaunted as she rested her palms on her bare chest, her high-waisted stockings revealing her incredible figure.

Her sun-kissed skin glowed as she posed up a storm for the snap, her fans driven wild as she offered them a jaw-dropping pose.

Georgia smouldered sexily towards the camera, gazing at the lens seductively in the jaw-dropping photograph.

Her makeup was sensational as she rocked long fluttering eyelashes, highlighter dusted cheekbones and a bright red lipstick.

Georgia's blonde locks were styled in an effortless up-do held in place with a purple hairband.

She captioned the snap with a cheeky remark: "Do you lot f***ing mind giving me some privacy, I'm trying to change", adding a flirtatious smirk-emoji to the end of her comment.

Her devoted fans rushed to leave a comment on the scorching picture, showering the siren with compliments.

One said: "Absolutely stunning purple is definitely your colour."

While another wrote: "Oh my gosh wow."

Georgia recently said that Love Island will benefit from taking a break over the summer.

She told Daily Star Online exclusively: "To be honest I think they've done the best thing taking a break. I don't think if you have a TV show that's doing well that you should just overdo it.

She also added: "I don't think it's run its course, I think there will always be a space for Love Island. It took over the nation in a way that another TV show never quite has before."