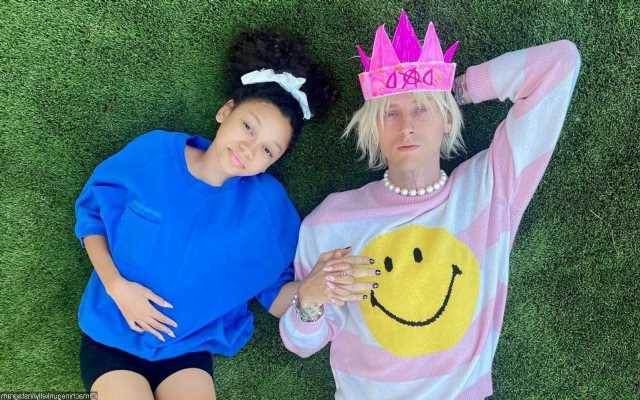 The ‘Ticket to My Downfall’ star talks about his 12-year-old daughter, claiming the girl has ‘her finger on the pulse of what’s hot’ when it comes to new music.

AceShowbiz –Machine Gun Kelly “trusts” his daughter’s opinion of his music “more than” his own.

The rapper-turned-pop-punk star is gearing up to release his guitar-heavy album, “Born With Horns“, in 2022, which marks his second album with Blink-182‘s Travis Barker on drums and producing, following 2020’s “Tickets to My Downfall”.

And the “My Ex’s Best Friend” star has revealed he will always get the seal of approval of 12-year-old Casie Baker on his tunes.

Speaking about his little girl – whom he has with ex-girlfriend Emma Cannon – on “The Kelly Clarkson Show“, he said, “I trust her opinion more than I trust my own now.”

“Like, she has her finger on the pulse of what’s hot, or if I’m doing a song and it’s the right one, she’ll confirm it.”

MGK – whose real name is Colson Baker – recently made a rare public appearance with Casie at the American Music Awards, where they posed together on the red carpet.

The “Dirt” star – who is in a relationship with actress Megan Fox – also shared his shock at finding out how much his offspring’s volleyball tryouts were going to cost him.

Teasing his upcoming LP recently, MGK said, “It’s more guitar-heavy. Lyrically, if Tickets to My Downfall was metaphorically high school, then Born With Horns is college. And I think like, in high school, you don’t really have a sense of responsibility, you have a fear of that responsibility, and so you want to explode and use all that energy for f**king off. And then college comes, which is this album, and you are aware of the responsibility and you still know how to have fun, but you understand that there’s a certain duty you have to your life to do something with it. Born With Horns feels like it has an objective or a real lesson that you’re walking away with.”