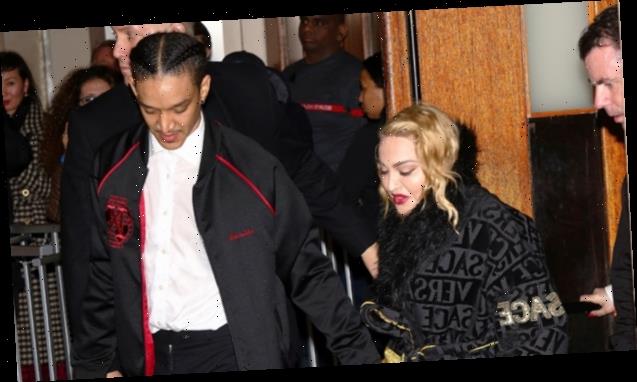 Madonna and her boyfriend Ahlamalik Williams were seen holding hands after her triumphant return to the stage in Paris!

Not letting her fans down. Madonna, 61, appeared to be in great spirits on Wednesday, March 4, days after she was forced to cancel one of her Madame X shows in Paris due to her knee injury that has plagued the music legend for months. Her hunky boyfriend Ahlamalik Williams, 25, was by her side after she exited her latest performance that took place at the Grand Rex in the country’s capital. The “Material Girl” was a repeat offender, fashion wise, as she was seen wearing the same gold and black Versace robe with a furry black collar that she sported on Saturday, February 29 (the look was still fierce, though). She also sported a cane during her outing in the European country, something she’s been often seen out and about with due to her physical issues that she’s been very honest about on her social media.

Madonna returned to the stage after she canceled another one of her Madame X shows on Sunday, February 29. She addressed the cancellation head on on her Instagram account with a lengthy post about the state of her health and how apologetic she was to her fans during this tough time. The situation happened three days after she fell off a chair during her performance that reportedly left her “in tears”.

“Here I Am Flesh and Blood,” the Golden Globe winner penned on her IG. “If only knees didn’t twist and cartilage didn’t tear and nothing hurt and tears never fell out of our eyes but alas they do and Thank God for this important reminder that we are human. I Fell 2 nights ago on stage when a chair was literally pulled out from underneath me by mistake and I landed on the floor on my tail bone.”

She continued, “I made it thru the show last night but just barely because I hate disappointing. However today even I can see that this broken doll held together with tape and glue, needs to stay in bed and rest for a few days so she can finish the tour with a smile on her face and in one piece.” Her fanbase was empathetic and understanding of her situation, with one writing, “I’m happy you are listening to your body and taking it easy. I know emotionally this can’t be easy for you! We are with you.”