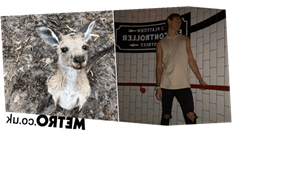 Drunk purchases are real so your best bet is to keep. that. bank card. away.

One man got royally wasted on New Year’s Eve and was still feeling the aftermath weeks later. No, we’re not talking about a hangover from hell.

For Peyton Haag, his drunken night was felt two months after it happened, mostly on his wallet.

That’s because the recent uni graduate from Minneapolis, Minnesota, decided to adopt a kangaroo (named Poppy, in case you’re wondering), which cost $5 (£3.88) a week. Yes, a week, which is nearly £20 a month.

And Peyton only realised the error of his ways yesterday, after weeks of donations.

The 22-year-old did some digging around to find where his money kept going and landed on the animal adoption’s website (which he doesn’t want to name).

He also noticed a weird line on his Notes page saying ‘fly to Popdy’ (that’s drunk for Poppy), which has just made sense to him now.

But he isn’t surprised by his drunken antics, given his love for kangaroos.

Peyton tells us he spent a year abroad studying in Adelaide, Australia, home of kangaroos, and built a natural affinity to them.

So when the Australian bushfires happened, Peyton was particularly moved.

Hence the sweet attempt at helping.

Peyton explained to Metro.co.uk: ‘Every week since 2 January, I was having $5 automatically deducted from my checking account. This was also around the same time I had renewed a bunch of services I normally use that require monthly payments (Spotify, Amazon, Netflix, etc) so I really didn’t think too much of it for a while as I thought it was just some fee or tax or something.

‘This was until a few days ago when I noticed that it was happening weekly instead of monthly which is not normal at all for subscription services so I tried looking into it and found that it was a wildlife and environmental group.

‘After A TON of digging, I found a receipt in my student email that said “thank you for your donation! your sponsorship will go towards all kinds of animals in need, including this injured joey named Poppy!”.’

Peyton did some research and found that the organisation he had chosen wasn’t sending all their contributions towards the animals so he decided to stop.

Instead, he will soon be sponsoring two different joeys.

Naturally, the story gained some traction on Twitter when he shared it with followers, amassing more than 200,00 likes.

Peyton used all the attention for good and listed a number of other charities and shelters which do allow you to make a symbolic adoption.

He feels it’s the least he can do, considering the devastating impact on Australian wildlife.

He says: ‘I assume I was inspired to adopt a kangaroo that night as this was also around the time of the Australian wildfires were very bad and having studied abroad in Adelaide for five months, I am very attached to the country!’

Not the worst decision to make while drunk.

Do you have a hilarious drunken story?

If you want to share the story with us, email [email protected]