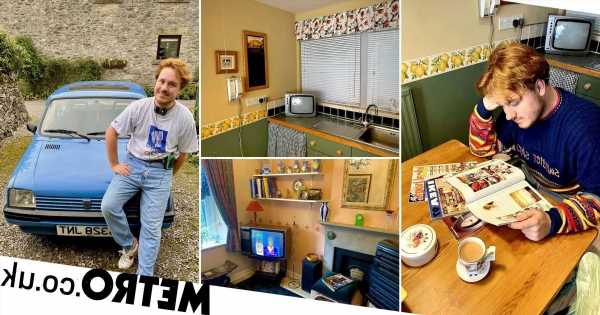 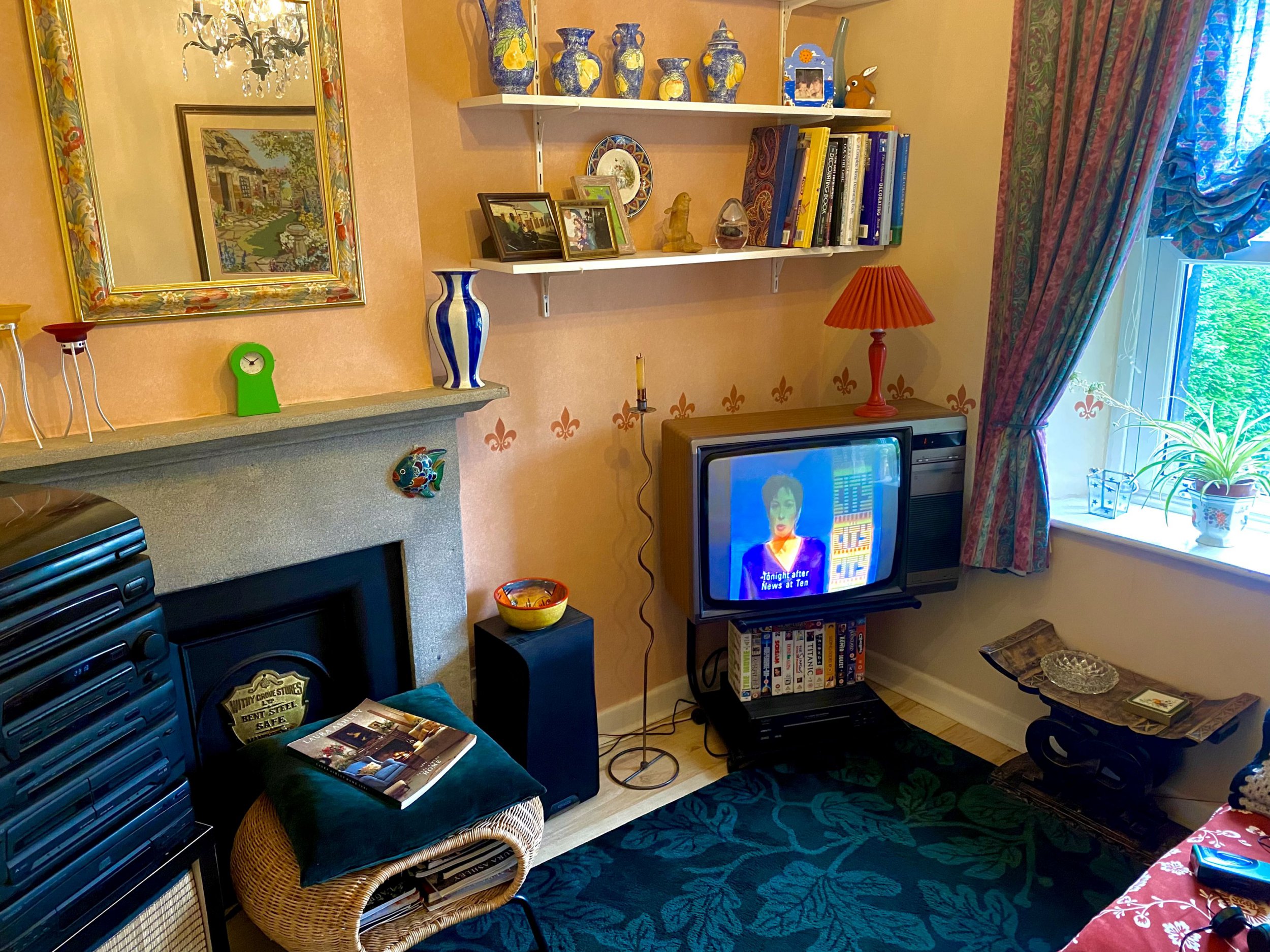 Jack Walters loves the 1990s – so much so that he’s turned his flat into a time capsule of the period, filling it with retro tech like VHS players and telephone alarm clocks.

His commitment to the era also extends to his everyday life, as he even drives an old ‘G reg’ Austin Mini Metro.

The obsession has seen Jack spend around £5,000 on pre-millennium items including vintage Levi jeans and Sweater Shop jumpers.

The 23-year-old says he finds comfort in the era and hoped to recreate the ‘cosiness’ of his parents’ house from when he was a child – though he admits people think he’s ‘mad’ for not enjoying the present day.

The illustrator believes the 90s had the ‘perfect balance of enough technology to keep us entertained, but not enough to feel like an overload’ – though he admits he has to explain what his VHS tapes are to younger relatives.

And due to living in the countryside, Jack’s 90s phone with extendable aerial actually has a practical reason, ensuring he gets better signal than his mobile phone.

Jack, from Bakewell, Derbyshire, said: ‘I never really enjoyed modern decorating with all the greys. It didn’t have the homey quality, and I wanted to replicate that.’

The three-bedroom cottage – which Jack lives in with his parents and his partner of two years, Matthew Whiting, 28 – was described as a blank canvas when they moved in two years ago.

So Jack began scouring charity shops and eBay for decor with the ’90s flavour he loved, and as he grew his collection, friends and family also started to gift him items they thought he’d like.

Jack said of his old-school treasure trove: ‘I’m probably at the charity shop once every two weeks, and I probably spend about £30 max.

‘The most expensive item I’ve probably brought is my 1980s television in my living room. That was £155. Not that expensive really, but for an old TV, people think I’m mad.’

There are a few modern items in the flat – such as a dishwasher and washing machine – but almost everything else is from over two decades ago.

Photos show Jack’s home full of Ikea catalogues from 1997, old Nokia phones and a bulky, square laptop displaying Windows ’95. Down to the Men Behaving Badly video boxsets and Now That’s What I Call Music cassette tapes, it’s a haven for reminiscing about a simpler time.

‘At a push, I’d say my favourite item is probably my radio-alarm clock-telephone,’ said Jack.

‘It’s very mundane, but I always feel a bit glam taking calls from my bedroom. I do love my bedroom though, as once you shut the door, you could be anywhere between the years 1990 and 2000.’

Reactions from visitors range from nostalgia to simply not getting it, as well as bewilderment from younger people who’ve never heard of Geri Halliwell or had to rewind a tape using a pencil.

Jack doesn’t mind if people don’t understand his taste, and has started sharing videos of the flat on TikTok, finding thousands of others who share his fondness for the ’90s.

He said: ‘It’s an escape from the modern world. Some people go to the gym, some play video games, this is my thing.

‘My partner is massively into video games, so he has all the original Nintendo consoles. We overlap in our interests there, so that’s nice.’

Despite loving the style and fashions, though, Jack insists he wouldn’t want to actually travel back in time to the 20th century.

‘Being a gay man and having no internet, I probably wouldn’t have met my partner. Gay men weren’t portrayed in the media at all.

‘I have vintage interests, but modern values.’

Get in touch by emailing MetroLifestyleTeam@Metro.co.uk.