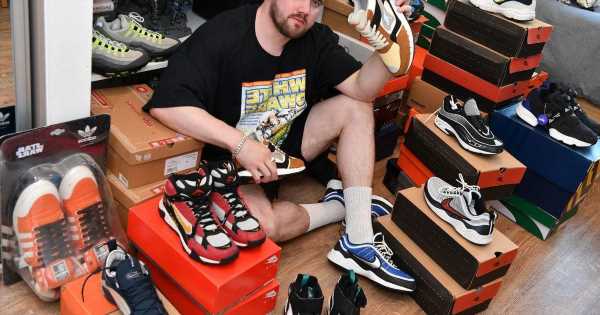 Sign up for Daily Star Hot Topics newsletter for the most exciting real life, fashion and sex tips HOT off the press

We all have that one thing we love splurging on – and one bloke just can't get enough of sneakers.

So much so, Morgan Weekes has over 800 pairs and claims to have the largest trainer collection in the UK.

The 30-year-old, who is founder of sneaker agency Morprime, goes as far as to keep some of the shoes in a temperature-controlled storage unit.

And his obsession has spanned over the course of decades.

Morgan, from Woking, told Surrey Live how he began his collection at the age of 12.

His collection has now got so big he can't store them all in one place.

Morgan said: "I have 800 or so pairs spread across a few locations. With new pairs coming in every week. It [the collection] always increases every month.

"Right now the storage unit looks like a stockroom in a store, it's massive and full up to the walls. I tend to collect Nike between 1990 and 2003, they're my favourite years.

"That's what I generally collect but I've got every brand under the sun."

In the flat he lives in he says he tries to keep the number of trainers in it to a minimum.

He said: "I prefer not to keep too many pairs in my house, if you have too many shoes in one area, there is glue, leather and foam that can create particles in the air, especially as some of the shoes I have are 30 years old – which I've never thought is that great for your health."

Morgan has plenty of retro shoes too – with some dating as far back as the 1980s.

His most expensive shoes are a limited collaboration with McLaren F1 and Asics, given to him by an ex-employee.

Morgan did not reveal how much any cost but says sneakers can range from £100 to £15,000 and up for a pair in his collection.

He also has a few rare movie editions under his belt.

"I've got the re-release of the Aliens shoes, Reebok Alien Stomper worn by the character Ellen Ripley in the film," said Morgan.

The favourite pair he owns is his Nike Spiridon trainer.