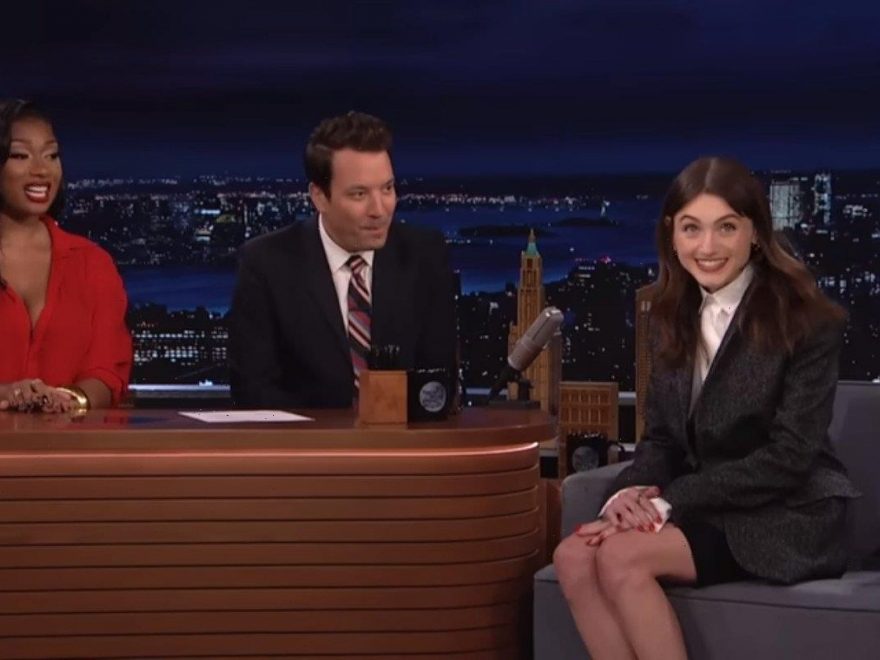 AceShowbiz –Megan Thee Stallion is a huge fan of “Stranger Things” and it shows. The “WAP” hitmaker served as Jimmy Fallon‘s co-host in an episode of “The Tonight Show Starring Jimmy Fallon” which featured “Stranger Things” star Natalia Dyer as the guest and that was when she laid all the questions she has about the hit Netflix series.

Megan then started grilling the “Hannah Montana” alum regarding the matter. “Let’s talk about it, though. Okay, so boom. At first, you liked Steve. You were into Steve, and then you just kind of like dumped him. No caution, he didn’t know what was happening,” she said.

“Y’all keep throwing the kids on him to babysit. He keeps saving y’all life. All he do is save y’all life,” the 27-year-old continued. “He was beating everybody up, and you’re like, ‘Oh man, I’m going to Jonathan. Sorry.’ “

Natalia could not help being amused by Megan’s passion for the characters. Admitting that she does “feel bad” about Nancy’s choices, the actress explained, “Honestly, I just think the way Jonathan and Nancy happened, I was like…she doesn’t always make the most morally right decisions all the time. But that’s human.”

Jimmy tried to steer the conversation to what fans can expect from “Stranger Things” in its upcoming finale season, but Megan couldn’t let the subject go. “Wait, wait, wait. ‘Cause we didn’t even get to the juicy part,” she said. “So then, in this last season, you was flirting with Steve. So like, what’s it really giving, Nancy? I feel like you like Steve still.”

To that, Natalia hilariously responded, “You know, you just got to have options, I guess,” before she quickly clarified that she was just kidding.

The episode also saw Megan asking Natalia about Barbara Holland a.k.a. Barb, Nancy’s season one friend who gets abducted and killed. “do you miss Barb? Bring Barb back, hashtag that!” the Houston star excitingly said. “You know, think is kind of – I never am allowed to forget about Barb. I get it. You know, it’s part of Nancy’s arc. It definitely drives her forward. Has she completely dealt with it? I don’t know. We have not forgotten about Barb,” Natalia replied.

Megan then shared the lesson that people could get from Barb’s story. “This is a lesson for friends anywhere. Do not be a third wheel, because Demogorgons will come get you,” she said.