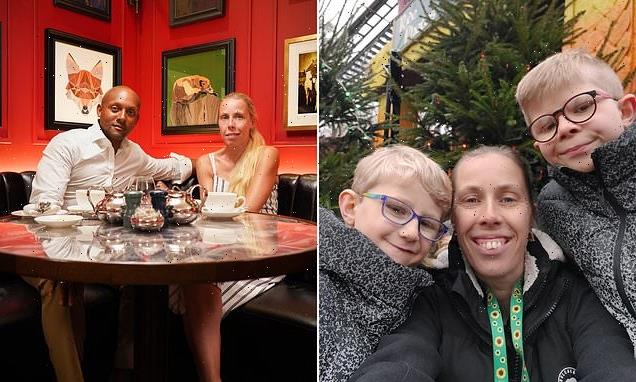 Millionaire reveals he felt ‘guilty’ after swapping lives with single mother-of-two who lives on £64 a week and can’t always afford to eat on Rich House, Poor House

A millionaire barrister and building developer said he felt guilty after swapping lives with a single mother who has to forgo meals so her children can eat during an episode of Rich House, Poor House.

Roy Ledgister, 48, from Lewes, East Sussex spent a week in the shoes of Becky Bigginton, 37, from Turnbridge, Yorkshire, for the Channel 5 programme’s new season, which debuted on Sunday at 9pm.

He also addressed his own bias against low-income families, and admitted he was ashamed of some of the remarks he made on the show, including expressing surprise at how ‘tidy’ Becky’s home was.

Following the social experiment, which was filmed in the early spring, the pair are still in touch weekly, with the single mother working as an unpaid consultant for Roy’s company, as he provides her with mentorship.

Meanwhile, Becky said she hoped her time on the show would show she is not ‘lazy’ and that you’re ‘never too old to fulfil your dreams.’

Scroll down for video 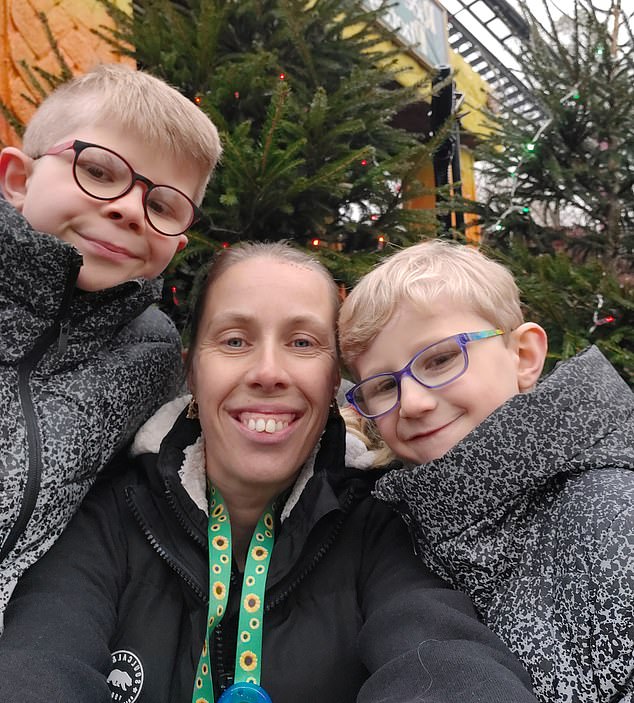 Becky said she hoped her time on the show would show she is not ‘lazy’ and that you are ‘never too old to fulfil your dreams.’

Speaking to FEMAIL, Roy said  he was ‘astonished’ by ‘how little money some people have to live on.’

And while he said he considered himself ‘sympathetic’ to Becky’s money trouble, he also revealed how the show pushed him to face his own bias against low-income families.

During the episode, the CEO was heard saying Becky’s flat was ‘nice and clean’ when he visited for the first time.

‘Why am I saying that? What does it say about how we see low income families? As if her house should be messy or untidy. It horrified me,’ he admitted.

Mother-of-three Rebecca revealed she relies on the food bank weekly, saying: ‘I’m here most weeks, it’s become almost like a family here now. It’s horrible to feel that I can’t provide myself my own children. But I would rather. I’d do anything to make sure that they are fine, they are happy, they grow up strong.’

She became emotional as she revealed she could not see a way out of her situation.

‘For me, this is my life now, it’s always been. Down at the bottom. There’s no getting out of it, there is nothing to help me, there is no way I can improve my situation,’ she said, crying.

Roy gave her a sympathetic hug. He later told the camera: ‘The food bank experience on the whole was difficult for me, speaking to Rebecca who brought to life what it’s like living in the shoes of someone like Becky. They are very similar in terms of the circumstances that they face.’

Speaking about her side of the experience, Becky said she wanted to show viewers that people on benefits should not all be ‘painted with the same brush’. 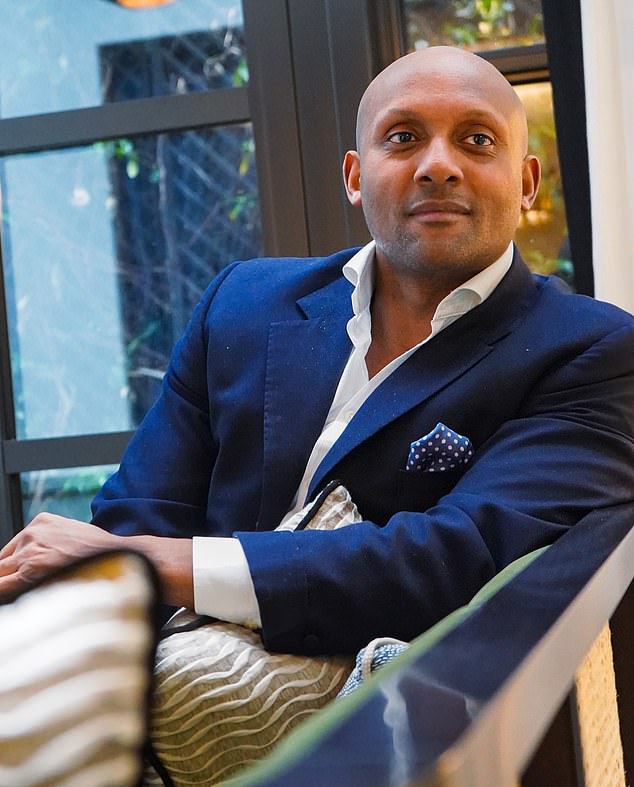 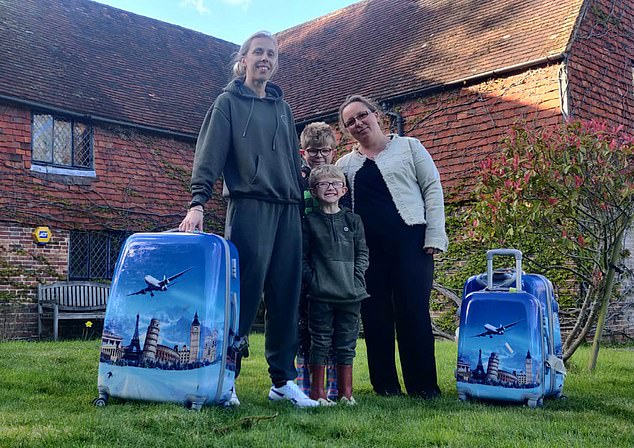 Pictured: Becky, her sister Jenny and her two sons in front of Roy’s farmhouse. Roy said he was ‘astonished’ by the ‘plight of single mothers and ‘how little money some people have to live on’

The single mother, who has returned to college to get more qualifications, and is studying English and maths skills, added: ‘Just because I’m on benefits doesn’t mean I’m lazy,’ she said, adding that she wanted to show people that they are ‘never too old to [go] back to school’.

Speaking about Roy, she revealed that he has been nothing but welcoming to her since they met on the show and that he has always ‘treated her as an equal.’

The pair went to Royal Ascot together, alongside Roy’s wife Naomi and her friends in June.

‘Even though they are a complete higher class than what I’m used to being around, they included me in everything, and there was no divide caused by money,’ Becky said.

However, as the cost of living crisis continues to unfold, Becky admits she is worried about what the future holds for her and her two sons, especially amid rising electricity prices.

She explained that currently, her two sons get food vouchers and are fed at summer school, but come autumn, she will be left to choose between ‘heating or eating’.

During the Rich House, Poor House episode, both Roy and Becky cried when they swapped budgets and discovered how much they would have to live on for a week.

For Roy, discovering that a single parent like Becky had to feed two boys for a week on £64 was a tough wake up call. 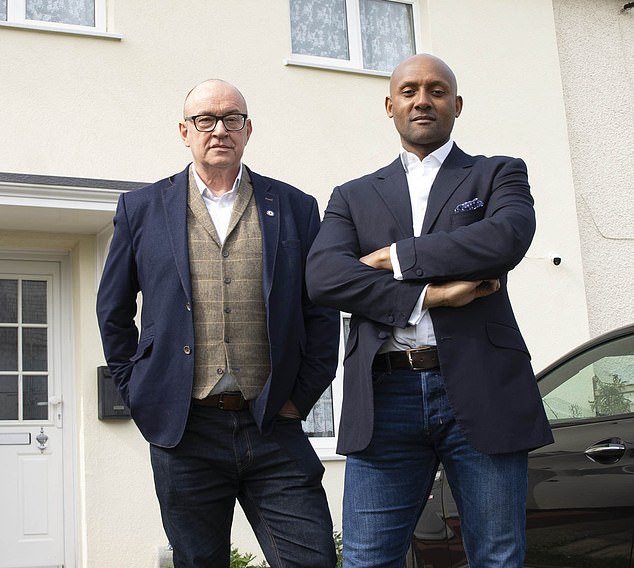 Roy went on the show with his friend and business associate Richard, left, and stayed at Becky’s home

He said he had been excepting to see double that amount, before leaving the room, saying he was ‘very upset.’

In spite of his current wealth, Roy grew up in humble circumstances, and was raised in Shepherd’s Bush by a single mother, who always taught him to strive for success.

Reflecting on his formative years during the programme, Roy said:  ‘My friends are listening to hip hop, I’m listening to the words of Seneca and other philosophers and stoics.’

‘There are only 24 hours in a day, if you’re going to sleep through some of them, you better use your time wisely,’ he said.

However, after he qualified as a barrister, he decided to take his career into a new direction and raised £50m to start a new company. 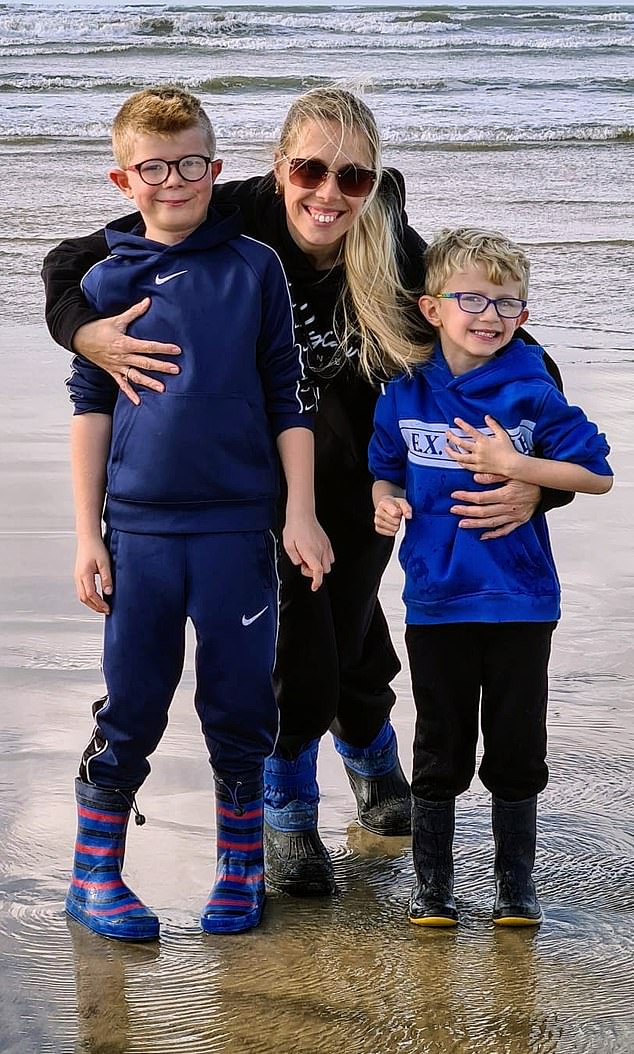 Becky said she is not ‘lazy’ and revealed she is her son’s carer, and was caring for her mother until she passed away after the show wrapped

He set himself on a journey to build affordable luxury housing for low income families.

He was joined on the Rich House, Poor House experience by his business partner and friend Richard.

Meanwhile, in Lewis, Becky, and her sister Jenny, couldn’t hide their shock when they learned Roy had £1,750 of disposable income per week.

‘That’s more than my take-home wage for a month,’ Jenny said.

‘That’s insane,’ Becky said, struggling to find her words. ‘Every week this person would take this home. They can spin this every, single week,’ she said, crying. 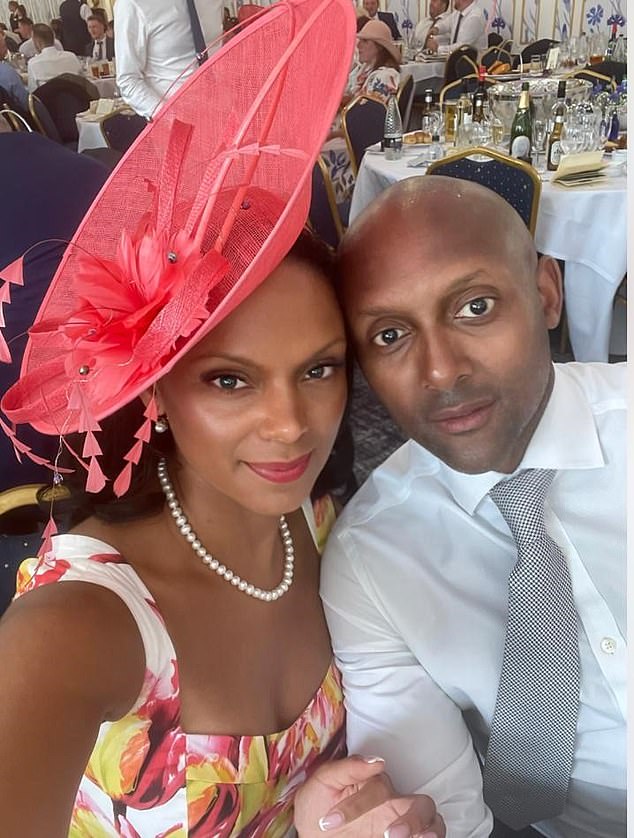 Roy, pictured with his wife Naomi, who doesn’t appear on the show. The experience was an eye-opener for the CEO

Becky has been used to making every penny count: After being unemployed for seven years, Becky relied on benefits to raise her sons Finley, seven, and Roman, five.

Finley was born with hypermobility in his joints which causes his feet to turn inwards.

As a result, Becky had to qualify as his carer, because he was registered as disabled, and she also spent her time looking after her mother, who was ill, as well as her grandparents.

The family-of-three lives on Becky’s £64 a week income and has had to rely on charity and food banks to get back.

Feeding two growing boys meant that Becky often had to go without eating, or would just eat toast or leftovers.

She had tried to grow vegetables at home, however, a spell of bad weather dashed her hopes of being semi self-sufficient.

‘Our poor beloved green house flew off like Mary Poppins and never returned,’ she joked.

She was determined to show she wanted to improve her situation. 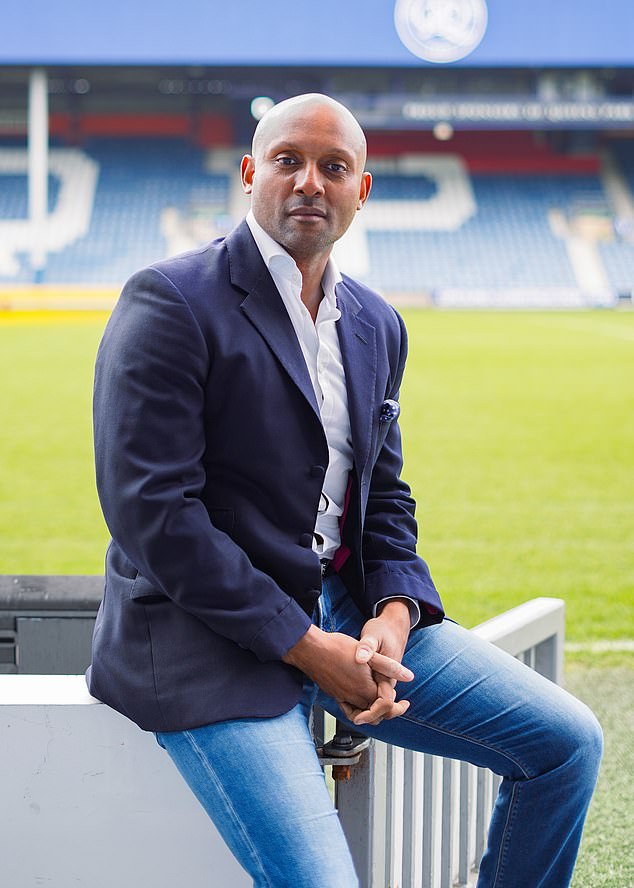 Businessman Roy now mentors Becky once a week when she visits his office, and wants to work out a way to have her come on board more permanently

‘I’m not lazy by any stretch of imagination, I want to work, it just doesn’t work for me right now,’ she said.’

The mother-of-two’s confidence was at an all time low, and she was in need of a boost.

‘I’d like to work with children and adults with special education needs just because i feel like I’m drawn to them,’ she said.

Her younger sister Jenny, who went on the show with her, said Becky left very little time to care for herself because she was always putting her family first.

‘She’s never have time for herself, she’s always “the boys”, “the family”,’ she said.

‘It’s never Becky on her own, there’s not time for Becky,’ she added.

Becky’s reason for swapping lives with Roy was to show her boys ‘this is what you can have if you work hard, but in order to do that, you need to get a good education.’

Roy said Becky’s house looked just like the one his mother raised him in in Shepherd’s Bush.

During the week, he learned more about Becky’s circumstances and met with her mother and sister Lorraine, who explained to him why Becky was trapped on benefits 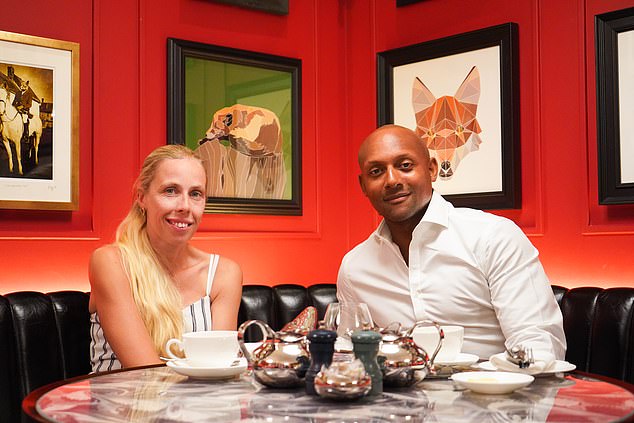 Becky said Roy has been nothing but welcoming, and that the pair event went to Royal Ascot together in June

‘To go to work now – she would probably be worse off, at the moment she’s getting help towards rent cost and living costs but if she goes into full time work, her benefits will all get stopped, Lorraine said.

‘I can make sense of why she’s doing what she’s going, but there must be a better way, she’s on a treadmill at the moment just trying to run to keep still,’ Roy told the camera.

Meanwhile, Becky learned more about Roy’s past and his company, giving inside during a board meeting.

When the experience came to an end, the pair got to meet, and Roy treated Becky and her boys to a safari, and a family day out to watch Arsenal play.

At the beginning of the programme, Roy said he was open to the possibility of mentoring the person he would be swapping lives with, saying: ‘Mentoring is something ‘s very important to me.

‘If I get the opportunity to meet somebody who is hardworking but even more so, determined to win, 100 per cent categorically, I will change their lives.’

By the end of the show, he offered Becky an unpaid consulting gig at his company.

‘Finally, at the office yesterday you were contributing and you’ve got some great ideas – clearly you know what you’re talking about,’ Roy told her.

‘I think you could bring a bit more colour to the set-up, so if you’re up for it, I’d love to have you help us as a consultant.

‘Going forward that would be a real privilege for us and you could help us and not just help us, but thousands of people,’ he added.

It was a no brainer for Becky, who was enthused by the idea.

‘I’m definitely interested to see how maybe I could input more for Roy for future projects,’ she said. ‘They actually do value what we have to say.’