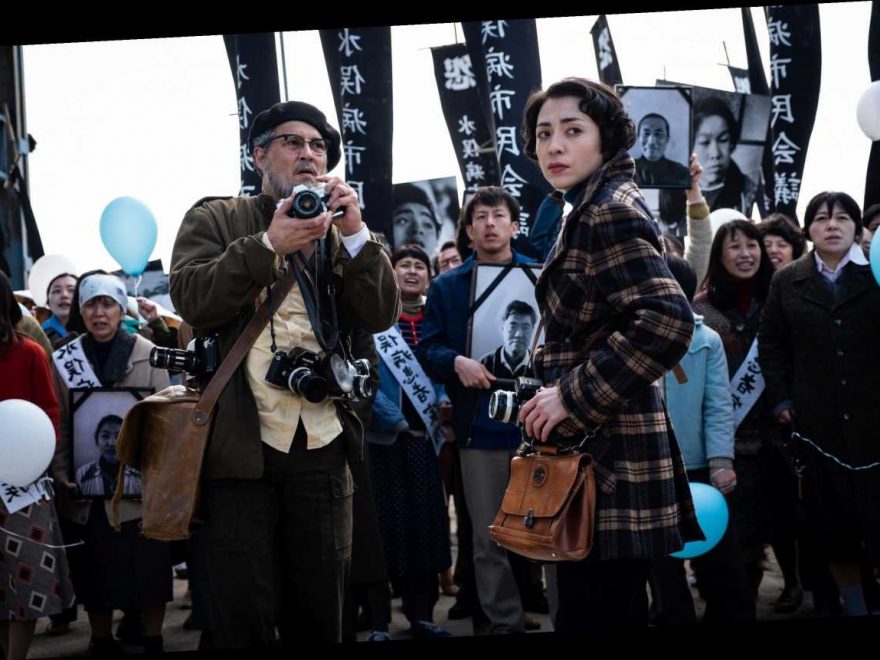 However, it doesn’t benefit from a haggard Johnny Depp as Smith, growling through a half-hearted impersonation as the movie dials up the maudlin. Here and there, “Minamata” tells a bracing story of corporate malfeasance and bracing advocacy for the underclass, but even the occasional poignant observation can’t salvage a movie trying this hard to tug every heartstring at its disposal.

The tale of Smith’s final, crowning achievement in a storied career holds plenty of appeal in the opening act. New York, 1971: Smith’s already out of the game. Once a celebrated WWII photographer, he’s devolved into a hard-drinking cyclone of resentment and self-pity. Estranged from his adult kids and strapped for cash, he begs Life magazine editor Bob Hayes (a stern Bill Nighy) to throw him a bone. Hayes rebuffs his advances, until fate brings Smith’s future wife to his doorstep. That’s Aileen (Minami), a Japanese translator keen on getting Smith to expose the poisoning that’s gradually killing off a small village where the ambivalent chemical conglomerate Chisso continues pumping a death sentence into the water.

Cue Smith storming into Hayes’s office  — interrupting a staff meeting for added effect — as he tosses an incriminating folder onto the center of the table, and lays out the case for his next big job: “Mercury poison! There’s your Pulitzer!” So goes the level of subtlety applied throughout “Minamata,” a movie that prefers to shriek its importance in hopes that some part of it sinks in.

Of course, Depp embraces those maximalist prompts. While his wacky gonzo instincts can be fun, this somber tale of social justice didn’t call for the Jack Sparrow touch. There is a curious thrill to watching the actor bury himself in unkempt white hair and march around in fits of creative desperation, but he’s always at odds with a movie struggling to find a realistic foundation. (The script does no favors in that regard: It’s a genuine mystery how anyone could greenlight a scene in which Nighy barks that his client better bring back “the best photographic essay of the last 30 years or I will personally fly out there and kick your ass!”)

There’s nothing wrong with a little sentiment in the right places, and harrowing tales of war journalists battling for the disenfranchised invite as much. Matt Heineman’s “A Private War,” for example, followed similar beats in chronicling the tireless efforts of correspondent Marie Colvin, who put herself in enemy crosshairs one too many times. But even as that movie had its fair share of hyperbolic editor-versus-reporter showdowns, it grounded them in understatement. “Minamata” shortchanges the perils at hand by defaulting to histrionics, as if chasing the algorithm for “Oscar bait.” By the time Depp cradles a deformed villager while singing “Forever Young,” you might expect the letters “FYC” to appear on the screen.

Nevertheless, once Smith makes his way to Minamata, the movie musters glimmers of potential. As Smith makes his way through hospital beds and interviews despondent workers, the movie shifts to his black-and-white photography and provides a genuine window into the nature of his work. Later, as the menacing Chisso CEO (Jun Kunimara) attempts to preempt Smith’s story with a bribe, the movie hints at the potential for an investigative thriller with real stakes. Cinematographer Benoît Delhomme captures the scale of the travesty, with sprawling factory spaces and swampy landscapes glimpsed in impressive wide angles providing a reminder of the forces working to stop Smith from finishing the job.

But the movie never fails to overstate these circumstances, devolving into blunt, grating monologues and orchestral swells (inexplicably credited to compositional maestro Ryuchi Sakamoto) that threaten to blow out the speakers more than once. At the very least, “Minamata” finally arrives at a key moment in the historical significance of its plot, with the conditions behind Smith’s ability to capture the staggering picture “Tomoko Uemura in Her Bath” that defined his legacy and stimulated pushback that led Chisso to reimburse many victims and their families. It also reveals the conditions behind an attack that left Smith with permanently damaged eyesight, effectively turning him into a martyr for the cause. There’s much to admire about the way it all worked out, but Levitas forces it into the mold of an overzealous biopic that dumbs down the real-world impact.

Smith’s photojournalism belongs in the official canon of 20th century activism. At the same time, the nature of his work mandates a more audacious approach — a documentary that takes its cues from the existing material, perhaps — given that his achievements have been documented by his own camera so well. “Minamata” recognizes his talent, but it adds layers of artifice to a harrowing story already told more effectively by its subject.

“Minamata” premiered as a Special Gala at the 2020 Berlin International Film Festival. It is currently seeking U.S. distribution.