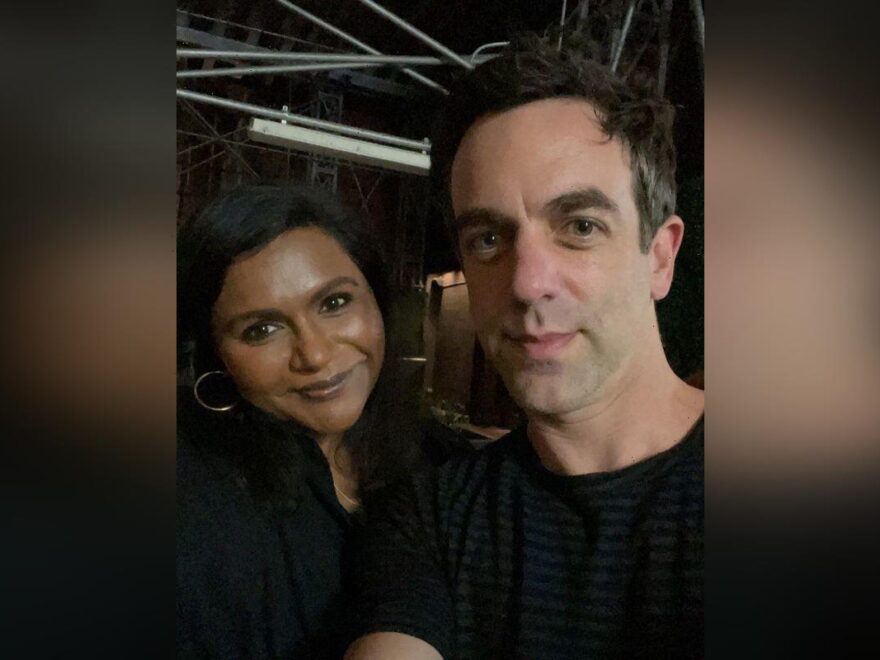 The ‘Mindy Project’ actress reveals in a new interview that a man broke into Novak’s car and went through his laptop when the two stars went to dinner in Los Angeles.

AceShowbiz –Mindy Kaling remembers a “genuinely scary” incident when a “weird” guy broke into B.J. Novak‘s car. When the 43-year-old actress was pregnant with daughter Katherine, now four, and she went for dinner with Novak in Los Angeles, they ran into a man she initially just thought was a fan who had recognised them but things took a dark turn.

“The most genuinely scary situation I’ve ever been in was when I was actually eight-and-a-half-months pregnant with her,” she recalled when speaking on “Jimmy Kimmel Live!“. “I went to dinner with my friend B.J. Novak … He parked the car and we got out of the car, I noticed there was a weird kind of guy, staring at us from the parking meter.”

“When we got out, he was like, ‘Hey, love you guys in ‘The Office‘!’ Then we walked down to go to the restaurant. Restaurant’s closed, for whatever reason. And then we walked back to the car, and when we walk back to the car – what we think is the car – we’re like, ‘Oh, that’s probably not it, because there’s somebody sitting in the driver’s seat,’ and we keep walking.”

But after realising they had gone too far, the pair walked back to the vehicle, which Mindy noted was a “fancy” one that automatically locked, and bizarrely found the man going through the 43-year-old actor’s laptop.

Mindy continued, “We go back to the car and the guy that we had talked to by the meter had gotten into B.J.’s car, was sitting in the driver’s seat and had B.J.’s laptop open and was on B.J.’s laptop. Which is so strange – he didn’t try to steal his stuff.”

Mindy and B.J. decided to confront the man, with “The Morning Show” actress blocking the driver’s door so he couldn’t escape. She quipped, “My sense of my sense of justice was greater than my sense of wanting to live.

“And then B.J. went to their side, and was like, ‘What did you take?’ The guy kept looking over at the door to try to get out. I was sitting there like, ‘You’re not going anywhere.’ Finally, B.J. got his laptop back and all of his stuff and he nodded to me, like, ‘You can open the door and let him out.'”

And the encounter then took another “strange” turn when the guy offered a warning to the stars. He told them, “You guys should be careful. Anybody could just get into your car.”

Mindy laughed, “As though this whole thing had been this like, ruse, he had planned to teach us a valuable lesson. By the way, it did teach us that! And then he kinda wandered away.”