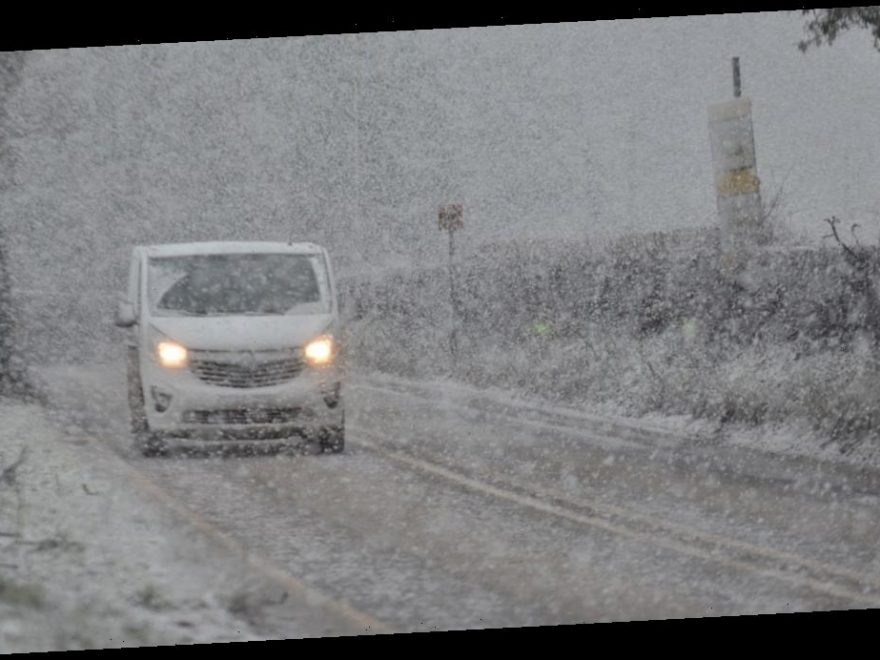 The effects of Storm Ciara continue to be felt as Sunday's rain and wind give way to hazardous levels of snow and ice across the UK.

Heavy snow fell in some regions after the storm disrupted flights, ferries and trains throughout Britain and the Republic of Ireland.

And the weather is set to be so extreme this week the Met Office could name another system with the next one expected to be called Storm Dennis.

Met Office meteorologist Bonnie Diamond said: "Storm Ciara has cleared but it is still windy. There is the risk of snow and ice depending on where you are.

"There is very much hazardous weather still around."

Yellow weather warnings for snow, ice and wind are in place on Tuesday and Wednesday, with snow already having been falling across the north Midlands and south Pennines yesterday afternoon.

Until midnight on Tuesday, a warning for heavy snow and strong winds is in place for Northern Ireland and most of Scotland, while a yellow warning of snow and ice is in force for north-west England.

While a snow and ice warning covering these regions is in place for Wednesday, as snow showers and icy stretches could cause further disruption.

Forecasters said some areas could see blizzards with up to 20cm of snow.

There were also 70 flood warnings in place across the country as of 3am on Tuesday.

Western Power Distribution – which covers the Midlands, the South West and South Wales – said more than 800 homes were still without power early on Tuesday morning, following outages caused by Ciara on Sunday.

UK Power Networks also said it had about 2,000 properties across the east of England without a supply.

The Met Office's John Griffiths has said Dennis is not for definite, however.

"Some models, including our own, are indicating that over the weekend there could be some particularly strong winds," he told Hull Live.

"But this is subject to change and we haven't named any storms yet.

"The earliest it could happen is at some point over the weekend, but it might also be later than that, so it is all subject to change."

The Government, meanwhile, has activated an emergency financial aid package for areas devastated by Storm Ciara.

Under the Bellwin scheme, local authorities dealing with the effects of the storm can apply to have some of their costs reimbursed by the Government.

This could be for items including rest centres, temporary accommodation and staff overtime.

Environment Secretary Theresa Villiers told MPs more than 500 properties are believed to have been flooded during Storm Ciara, with the number expected to rise further.

She added: "The latest number of properties confirmed to have been flooded are 40 in Cumbria, 100 in Lancashire, 150 in Greater Manchester and 260 in Yorkshire.

"We urge people in at-risk areas to remain vigilant, not to take unnecessary risks and to sign-up to receive Environment Agency flood alerts."

However multiple MPs took issue with the Government's response, branding it "completely unacceptable" that many constituents flooded during Storm Ciara were also victims of the 2015 Boxing Day floods.

"Many of my constituents who were flooded over the weekend are exactly the same people who were flooded on Boxing Day in 2015 which really is completely unacceptable," Tory MP for Shipley, Philip Davies, said.

Trains were impacted while airlines operating to and from UK airports were also affected by the weather conditions, with more than 100 flights cancelled.

Cold and windy with showers, these most frequent and heavy across the north with some significant falls of snow over hills, this drifting in the strong winds. Best of drier weather with sunny spells in the south and east.

Further falls of snow for the Highlands in particular, else showers mostly affecting the north and west, with clear spells and a frost for many areas.

Lighter winds and some sunshine for most, with showers fewer than on Tuesday, except in the far north, where further hill snow is expected. Rain into the south-west later.

Outlook for Thursday to Saturday: