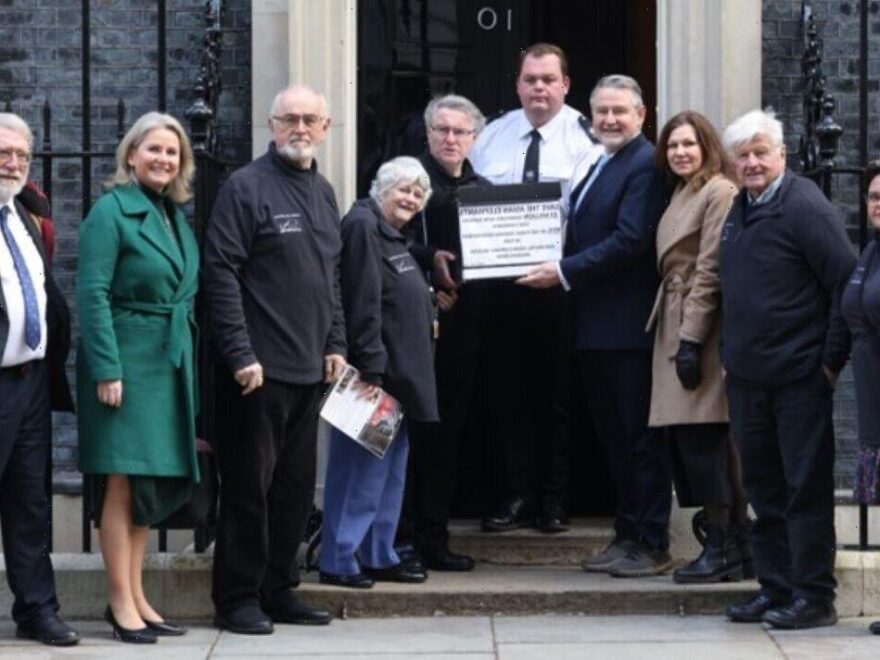 Stanley Johnson calls for an end to the Asian elephant horror

Stanley Johnson, Downton Abbey star Peter Egan and ex minister Ann Widdecombe were among the campaigners who handed a Save the Asian Elephant petition to No 10 yesterday.

A practice – known as “pajan” –  breaks their spirits and brutalises them into submission to do tricks, play games and give people rides.

Mr Egan said: “I think that the use of magnificent creatures like an elephant in entertainment is so disgusting. The journey they take to get to a point where their spirit is broken is so horrible.”

Referring to Pajan, he added: “I find it humiliating for the animal and insulting to the human being, and a thoroughly disgusting journey for a magnificent animal to be forced to take.”

The process can involve elephants being chained, deprived of food and beaten.

Several MPs and campaigners have backed calls for the Animals (Low-welfare activities) Abroad Bill following coverage in the Daily Express.

The bill is tabled by Angela Richardson, Conservative MP for Guildford, and is due for a Second Reading in the House of Commons next Friday.

Mr Johnson said: “The Express has done a wonderful job recently, in the sense that it has been publishing these campaigning articles.

“What is so important about today’s meeting, is that there was an absolutely clear commitment in the conservative animal welfare manifesto to bring in a measure which would discourage and even prevent, I hope, British tourists from going to the destinations, for example, in Thailand, and in other countries, where it’s perfectly obvious the elephants are being being abused and ill treated.

“And that was such a clear commitment that we are here today to really make sure the government delivers.”

Helen Costigan, whose sister was killed on holiday by a tortured elephant, also took to the steps of Downing Street yesterday.

Student nurse Andrea Taylor, 20, from Billinge, Merseyside, was gored to death in Thailand in 2000 after the animal charged at tourists during an obedience display at a park.

Helen said: “We want to make sure that the UK public are not visiting these kinds of parks, whether they be in India or Thailand or Bali – which has become a new tourist haven with elephants.

“It’s making sure that the elephants are raised in ethical conditions and are treated with the respect that they deserve.

“I think we’ve come a long way in the last 23 years, but I think there’s still members of the public that are ignorant or uneducated to the fact that elephant rides or entertainment for humans is so hard on the elephants in the way that they break them, and the way that they hit them with the hooks, withhold foods. It’s atrocious.”