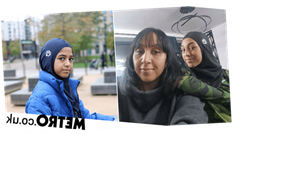 When Nazira Bemath’s daughter told her that some of her friends didn’t want to play sports because their normal hijabs were not suitable, she decided to do something about it.

The PR manager felt the current headscarves available were not safe, as they can require safety pins to hold them in place, and as most girls wear the same hijab during lessons as they do in P.E classes, they became sweaty and unhygienic.

So she came up with Hijab Active – a new line of headscarves for women to wear during sports.

The mum-of-three tells Metro.co.uk: ‘My daughter Malaika is a keen athlete and is the sports ambassador and identified that many of her Muslim peers who observe hijab were not participating enough or putting any effort into sports at school.

‘It’s crazy that there is not a sports hijab that is part of the P.E kit to date. If girls have to wear specific sportswear for P.E why is the hijab not part of this?’

‘She came home to discuss it with me and said so many of her friends were really good at sport but not participating properly because they wear their normal school hijabs in P.E lessons.’

While it started as a personal project for her own daughters, Nazira now wants other Muslim girls to have the option of a light-wear scarf that works for them.

She added: ‘My girls are very sporty – that’s why it came to light in the first place.

‘More importantly, I am trying to encourage Muslim girls to get into sports as it is not encouraged.

‘I started Hijab Active because there is a need for a sports hijab to be added to PE kit within schools.’

She got help from a friend who is a fashion designer, Rozeena Baureek, to create a properly functioning piece of sportswear.

What they came up with is supposed to be breathable, anti-odour and light enough for people to wear during strenuous activity.

At the moment, Nazira is trialling the line at her daughter’s school in Walthamstow, London but she hopes that soon it will be rolled out across other schools in the UK at an affordable price.

Nike currently has a high-performance hijab option but it costs £24.95, which is a lot more what you would pay for most headscarves. Some Muslims also worry about the ethical production of these offers, says Nazira.

She says: ‘We know there is Nike Pro Hijab but they are a very commercially driven venture and double the price of ours.

‘We have a PE kit for school so why not include a sports hijab in that for girls who wear it?’

Nazira’s also aims to get sports clubs and organisations on board to increase inclusivity and diversity as Muslim girls may not have all the resources.

So far, Nazira says those who have tried the product have found it really useful.

‘We tried and tested with a handful of friends and the response was phenomenal,’ added Nazira.

‘The said they didn’t feel hot and bothered, it is very comfortable and doesn’t get in the way when participating in sports.’

You can purchase Hijab Active online where it’s on offer for £12.99.