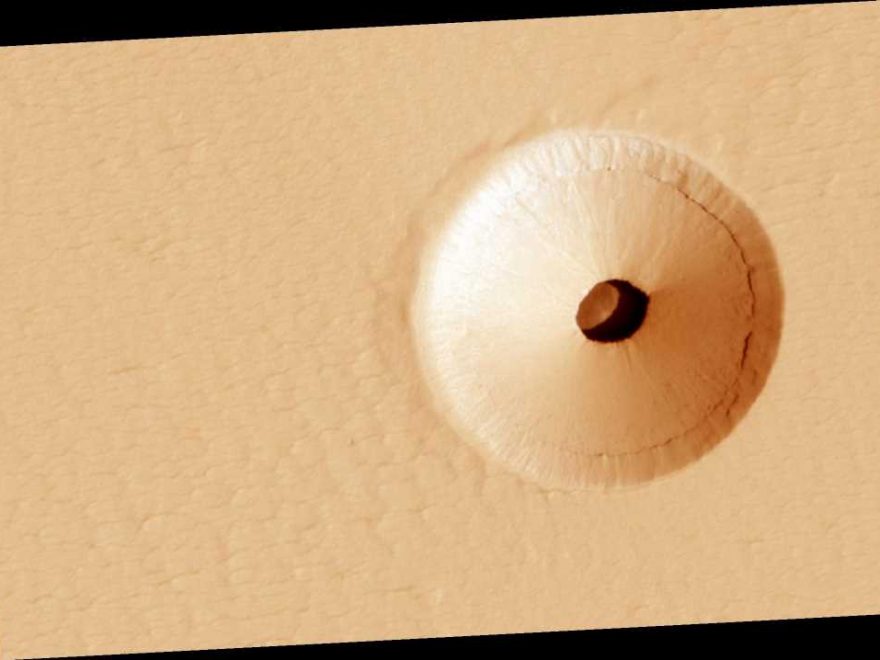 Alien life may be lurking within a mysterious caver under the surface of Mars, scientists claim.

An eerie crater on the dusty slopes of Mars’ Pavonis Mons volcano was picked out by two space scientists as a prime spot for extraterrestrials.

NASA says the “unusual” feature “appears to be an opening to an underground cavern.”

An image of the hole was first snapped by the Mars Reconnaissance Orbiter in 2011, and scientists have studied it ever since.

That first photo featured on NASA’s website over the weekend as the agency’s Astronomy Picture of the Day.

“Analysis and follow-up images revealed the opening to be about 35 meters across,” NASA scientists Robert Nemiroff and Jerry Bonnell wrote in the post.

“The interior shadow angle indicates that the underlying cavern is roughly 20 meters deep.”

The scientists went on to say that alien life may be lurking in the strange opening.

Pits like the one in Pavonis Mons will likely be the target of alien-hunting missions to the Red Planet in future.

“Why there is a circular crater surrounding this hole remains a topic of speculation, as is the full extent of the underlying cavern,” NASA said.

“Holes such as this are of particular interest because their interior caves are relatively protected from the harsh surface of Mars.

“This makes them relatively good candidates to contain Martian life.”

Future missions to explore Martian pits could be conducted by spacecraft, robots, or even human explorers, they added.

NASA recently opened applications for its next class of astronauts, some of whom it’s hoped will fly to the Moon or Mars.