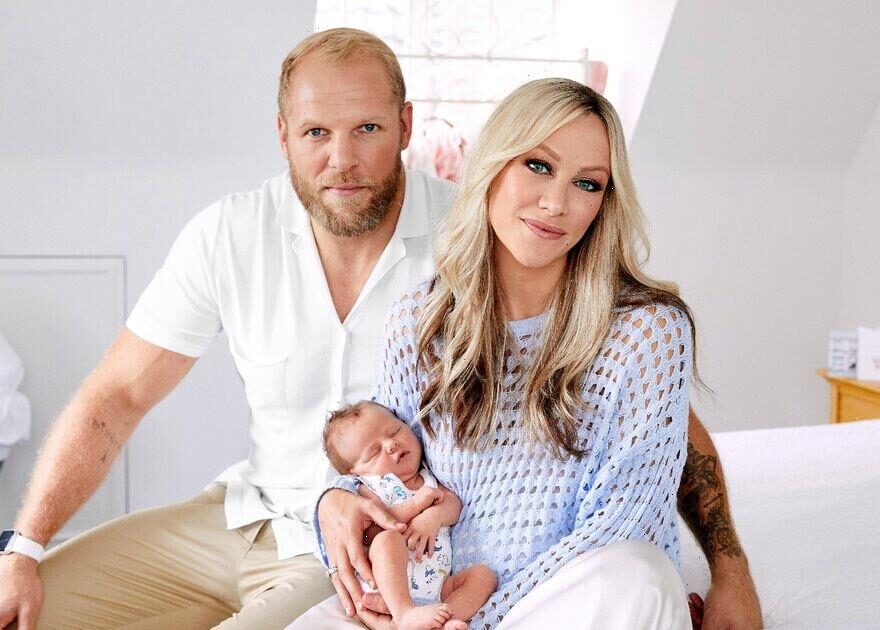 Chloe Madeleywas left in hysterics as she snapped a hilarious photograph of her baby girl Bodhi.

The new mum, who is married to ex-England rugby aceJames Haskell, could not help but see the funny side of the picture she captured of her two-month daughter.

The snap shows a slightly startled and perplexed looking Bodhi staring straight down the camera with drool streaming down her chin.

Chloe, 35, shared the picture to her Instagram story with the caption “best photo ever," followed by the cry-laughter emoji.

She went on to share two other more flattering photos of Bodhi.

One shows the baby peacefully feeding with the caption: “My love.”

The other shows the little girl standing on a counter dressed in a sweet, pumpkin-patterned outfit – as the new family prepares for their first Halloween.

She had planned on a water birth, but Bodhi still had not arrived 24 hours after her waters had broken, leading medics to recommend an induction.

This did not go to plan either, and with Bodhi’s heartbeat plummeting, she was rushed to theatre so the baby could be delivered safely.

Despite her scary arrival, Bodhi has gone from strength to strength, with doting mum Chloe describing her as a “maniac” as she constantly smiled at everything at just six weeks old.

Chloe also revealed she refused to take painkillers as she recovered from the C-section because she did not want the drugs to dull her time with Bodhi.

Speaking to OK!, she said: “I’m in so much pain now that a lot of my mental energy is going on pain management. I don’t want to take loads and loads of painkillers as I’ve got a newborn to look after.

"I don’t want to be taking opioids even though I do have them. I want to be present and I want to enjoy it, and with that it means embracing pain, so the last thing I’m thinking about now is training or exercise, I’m like – I need to eat what I want to eat and recover.”

Chloe then went on to share details of her recovery, as she showed her realistic and unfiltered body in the weeks postpartum.

Having returned to working out, the personal trainer shared her experience of building back her strength, fitness and nutritional health, following her complicated birthing experience.

And more recently, Loose Women viewers were treated to the first on-screen introduction of baby Bodhi, with the adorable tot looking content as she slept through the whole segment.

In their first TV interview since welcoming little Bodhi into the world in August, Chloe and James joined panellists Charlene White , Nadia Sawalha , Carol McGiffin and Sophie Morgan to talk about all things parenting.