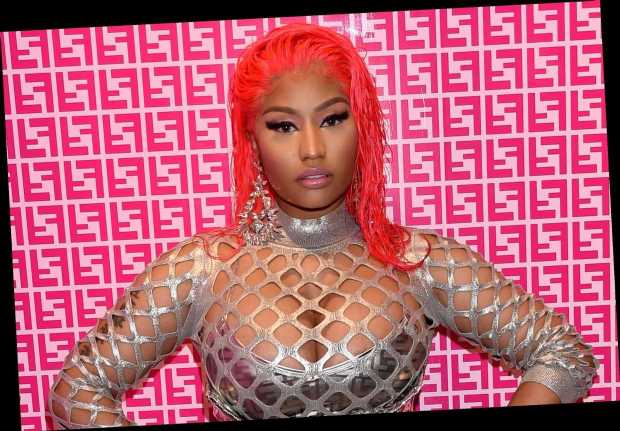 After a long day of panels, discussions and demos highlighting touring business trends at the Pollstar Live 2020 conference in Los Angeles, a keynote conversation between mega-mogul/manager Irving Azoff and the notoriously unabashed Nicki Minaj felt radical, refreshing and carefree.

Plenty of previous guests talked in circles, providing fluffy, media-trained responses rooted in carefully curated self-promotion. Not so for Azoff, known for his in-your-face attitude, and Minaj, who he dubbed the “Howard Stern of Beats Radio.” The duo covered a wide array of topics – The Grammys debacle, “retirement” and Trump were all discussed. And while she fanned away tears from her perfectly made-up face at the mention of Kobe Bryant, the pair mostly engaged in a tongue-in-cheek, “give the people what they want” approach. Here are nine things we learned about the rapper.

1. New Music Is Coming
Minaj strutted onstage to a snippet of new material as Azoff yelled to the crowd, “Should we drop that record?” “Now they want me to put it out,” replies Minaj. “So maybe I’ll put it out…” She snickers to a cheering crowd, asking once more, “Should I put it out?” Azoff responds with glee, “It’s national leak day!” Later in the talk he says, “I’m sure [Republic Records CEO] Monte Lipman is gonna have a heart attack when he finds out we’re gonna leak the set-up track later tonight or tomorrow.”

Minaj said that if they dropped the record on, say, Friday, they might do a new episode of her Queen radio show on Friday or Saturday as well. Fans can expect to hear that she’s in a good place on this album, with Azoff adding that he’s encouraging her to start her own label. The rapper also expresses that she’s “excited to go back on the road,” though she provided no details on timing.

2. She Supports Ousted Grammy CEO Deborah Dugan in Her Fight Against the Recording Academy
“What do you think about the Grammys, Nicki?” Azoff asks. “You’re asking me of all fucking people what I think about the Grammys?,” Minaj says. “Who was that lady that left them and started talking shit about the real deal, about what’s going on over there? What’s her name?” After some assistance from the crowd, she continues, “Well, shout out to [Deborah Dugan]. We need strong women that are willing to say what they have to say, even when they’re getting backlash for it. And every strong woman in here knows exactly what I’m talking about. But, you know what? I’ve got respect. Anybody who’s won a Grammy, I feel you oughta be proud of that. That’s a great achievement. But think the way we judge talent has changed. And that’s all I’ll say about that.”

3. She Regrets Some of Her Social Media Posts…
Azoff pokes fun at Minaj, asking her if she’d “been on Twitter at all today?” The question comes as a result of reinvigorated beef between the star and her ex, rapper Meek Mill, who accused her of condoning sexual assault allegedly committed by her brother against a minor. Minaj accused him of abusing women, including herself. “I was hacked! I got hacked this morning, you guys,” Minaj jokes. “Don’t believe anything you saw… the good old ‘hacked’ excuse.” Irving questions, “Now, is that shit premeditated or does it just happen?” “It just happens,” she says. “And listen, it never fails. Every time I do it, five minutes later, I’m like, ‘Why the fuck do I do that?’ You know what I mean? Every single time! But it’s a good lesson in knowing how to master your anger and emotions. So, every time I do that, I give myself a talking to in my head. Like… ‘Okay, you played yourself. You shouldn’t have did that. You learned your lesson again. Now, you kinda gotta learn that lesson!’ So, I gave myself that talk today, sir!” “I do the same shit, and then I just do the same fucking shit the next time,” Azoff says.

4. …Especially That “Retirement” One
They also discuss Minaj’s short-lived “retirement,” in which she tweeted (then deleted) last year, “I’ve decided to retire & have my family. I know you guys are happy now.” “Another time where I shouldn’t have had social media on my phone,” she says. “That’s why for the last three months I haven’t had social media on my phone. I just recently put it back on my phone and I’m about to take it back off… I don’t know how many of you guys have done this. But do you notice that when you take social media off your phone, you as a person feels happier? Or more at peace? You guys really should try it. I promise you. Because it’s too much of nonsense and nothingness, and looking at what everyone else is doing and comparing yourself to other people… when you’re having a great life. You are having a great freakin’ life! People didn’t wake up this morning. We’re good! And then we go on social media and make ourselves depressed.”

“I don’t ever think to myself, ‘What’s gonna keep me relevant?’” she added. “In fact, when I posted the retirement tweet, I did think to myself for a while, ‘Lemme just retire.’ I really felt that was a good idea at that time, but now I don’t. Social media is a tool. It can be your best friend or your worst nightmare. And if you don’t have that mental strength to navigate through it, it can cost you everything. You gotta be so careful with it. It’s only for the tough ones, really. It’s not for the faint of heart.”

5. The “C—sucker of the Day” Award
Azoff recalled when client Travis Scott and Minaj, who was not his client at the time, were in a battle for the Number One album. Scott took the top spot, but according to Azoff, plenty of people believed that Scott “created some new ways” (i.e. manipulated) around the chart system with bundles that lumped album sales/downloads in with “everything from Coca-Cola cans to merch, to posters, to backstage passes.” “He really cared about Number One and she really cared about Number One,” he said. “And I think she ended up Number Two. So, I got this great award, and I got really fascinated and started listening to the radio show. And then I heard one day that she and her management had parted company. And we’d never met, so I just called the bitch up, and here we are!” The “award” he’s referring to is “the cocksucker of the day” honor, which Minaj bestowed upon him in a heated episode of her radio show, in which she accused Azoff of allegedly launching a smear campaign against her NICKIHNDRXX tour.

6. She Regrets Some of Her Past Work
Azoff asked if there are any hits she wishes she didn’t release because she now has to play them live every night and she’s sick of it. “I wish I had never recorded ‘Anaconda,’ she says of her Sir Mix-A-Lot-sampling hit. “I like the video, but ick. My first-ever solo song on Billboard was ‘Your Love.’ To this day, I like the video but I hate the song. I could go on and on. I hate ‘Starships.’ I mean, ew… ‘Starships are meant to fly?’ Why did I do that?” When talking about records she wishes she wrote or had involvement in, she brings up Beyoncé. “When I heard Beyoncé’s album and she did a song called ‘Sorry,’ I was like, ‘Girl! Why you didn’t let me do 12 bars on that?!’ I was thinking that in my head, because I love that song.”

7. She Has Mixed Feelings About President Trump
“I’m not gonna jump on the Donald Trump bandwagon,” she said when asked about the president. “I don’t like that. I get that a lot of people don’t like him for obvious reasons. But, what stuck with me was the children being taken away from their parents when they came into this country. That really bothered me because I was one of those immigrant children coming to America to flee poverty. And I couldn’t imagine a little child going through all of that, trying to get to another country because they didn’t have money in their country, or whether you’re fleeing from war … and then being taken away from the one person that makes you feel comfort. That is what really raised my eyebrows. That is what made me go, ‘Something about this doesn’t sit right in my spirit.’ But! On Celebrity Apprentice, I think he was funny as hell.”

8. She Has a 10-Year Timeline That Involves Having Children
Minaj beams when she tells the audience what she expects her future to bring? “A lot of babies!” she says as her husband claps in the audience. “Everyone is always on pregnant belly alert with me. That’s another reason why I had to lose that damn weight. I’m like, ‘wait a minute!’ I wanna really enjoy when the pregnant belly is there. I don’t wanna be fat and have y’all thinking I’m pregnant all the damn time. God! But, you know what? What I see in 10 years… Before I had a dime, I always said I’d try to watch what Jay-Z did and how he handled hip-hop and entrepreneurship. I always look at him; I take my notes from him. So where you see Jay is right now, that’s what I want to be in the Nicki Minaj way. I wanna still be a staple, but giving open doors for new people to not only rap, but to do things in the tech space, putting on concerts and stuff like that. I think I’ll always be in music in some way.”

9. She Has a Special Affinity Towards Jews
“I think Jewish people are like black people. They say whatever the fuck they want to say,” she said. “I’m always like, ‘Why do I like Larry David and Judge Judy so much?’ It must be a Jewish thing.” Azoff then tells his son, Jeffrey, to “call Larry and get her on [Curb Your Enthusiasm].” “Please do that,” she enthuses. “I’d love that.”