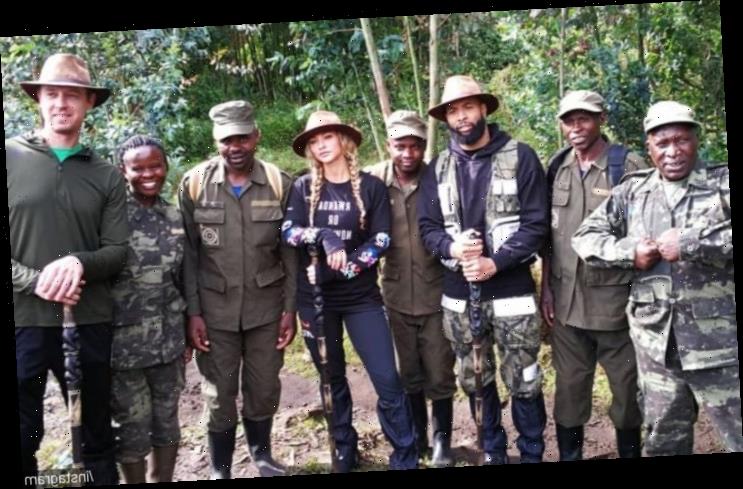 People get sensitive as they get the impression that the Instagram model likens the wide receiver’s physical appearance to the giant ape’s, while she’s referring to the gorilla’s confused expression.

AceShowbiz –Lauren Wood has trolled her boyfriend Odell Beckham Jr. in one of her new Instagram updates as she has been sharing glimpses of their African vacation. Posting a video of a family of gorillas, she jokingly compared him to the wild animal.

In the Instagram Story post, Lauren captured a big gorilla which was being surrounded by the smaller ones. She was heard gushing about how cute the baby gorillas were before focusing her camera on the big gorilla, which looked unethusiastic while sitting among the bushes. “That’s how Odell looks when he wakes up,” she said in the video.

While she seemed to make the joke in good fun, some people got too serious and took offense with it. They quickly jumped to conclusion that Lauren was comparing Odell’s physical appearance to the giant ape’s because of his race.

“A white girl comparing a black man to a gorilla .. in 2020… on black history month smh,” one person commented. Another remarked, “Even if they are together, that wasn’t a nice joke…” One other Instagram user wrote, “damn sis don’t you know it’s offensive to compare…nvm,” while another person chimed in, “This is what happens when y’all jump into relationships with white women who are racially insensitive …things they’re not supposed to say slips out every now and then.”

A confused user asked, “What she mean thats how he look when he wake up in the morning.” Trying to explain what Lauren meant with her joke, someone said, “The funny part is, she was probably talking bout how he looks confused and half awake I know I look like that.”

“She was joking. No need to make a big deal about it,” another responded to the critics. Meanwhile, someone else agreed with Lauren and quipped, “It do lowkey look like him tho.”

Some other people are still criticizing Odell for dating a non-black woman. “Wow they love getting them a white gurl ugggg ! I’m so over these football players,” one commented on the couple. “Downlow black men love them some white girls,” another remarked.

While Odell and Lauren have not spoken up to defend their relationship, a fan showed her/his support for the couple as writing, “I really love them together. What hotties.”

Odell and Lauren have been staying at luxury hotel One&Only Gorilla’s Nest in Rwanda. The resort is described as, “Cushioned in the foothills of the breathtaking Virunga volcano range along the north-western frontier of beautiful Rwanda, One&Only Gorilla’s Nest is the closest resort to Volcanoes National Park, and the region’s ultimate luxury retreat.” The suites at the hotel can cost upwards of $5,000 a night.

The pair have spent their time riding bikes around the city to see the local sites and meet locals and going on a safari trip. Sharing her excitement about their vacation, Lauren wrote in one of her Instagram posts, “Today is going to be a really special day !!! Stay tuned!”