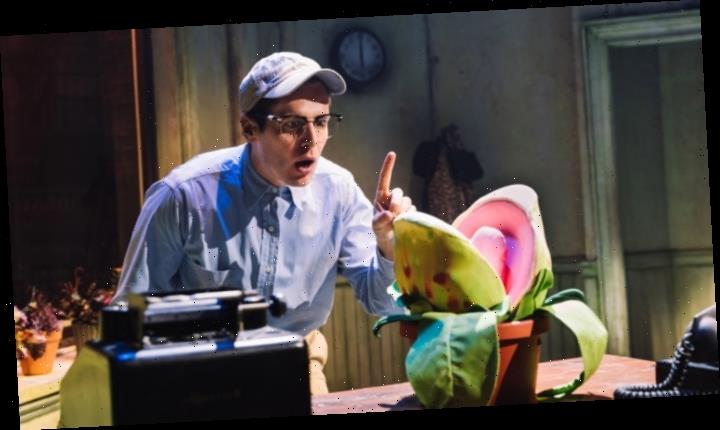 With its strains of kitschy doo-wop and its sci-fi B-movie inspirations, the quaint 1982 musical “Little Shop of Horrors” hardly seems a thing of modern-day revivalism, even despite its touches of S&M. Yet this year alone, not only is there an Off Broadway production of the blackly comic “Little Shop” featuring Jonathan Groff of Netflix’s “Mindhunter,” but there’s also a stripped-down take on the show at the Pasadena Playhouse, with “Pose” star MJ Rodriguez as the first trans Audrey. Why all the “Horror” now?

As the new Off Broadway staging makes clear, the reasons to restage “Little Shop” are a score that’s timelessly sweet and soulful, and a story that’s teasingly kinky yet weirdly old fashioned. You know: Boy meets girl, boy meets plant, plant eats girl’s boyfriend… You get the picture.

Groff and his Audrey, Tammy Blanchard (who won an Emmy for “Life with Judy Garland: Me and My Shadows”), are both subtle comic presences and supple, dramatic vocalists, ensuring that in this new production there’s something lovely at work, something devoid of the usual camp, schmaltz and quirk of “Little Shop.” Without the big, stagey “New Yawk” accents and broad interactions of yore, the humor comes more naturally, and neither Groff nor Blanchard have to chase the laughs.

The same qualities define their vocal spins on the “Little Shop” songbook. When Blanchard touches on the epic crescendos of “Suddenly Seymour” and her softer soliloquy “Somewhere That’s Green,” there’s a shushing jazziness to her tender vocals that conveys the deeper hurt of physical harassment. In that respect, Blanchard (who can also belt out the big notes) is just a few steps away from Billie Holiday’s pained and nuanced expressiveness.

And Groff, a Tony nominee for “Spring Awakening” and “Hamilton,” sings his own role with sweetness and light as his guideposts. This doesn’t mean that he lays off on the angst and desire needed for his paean to a plant (“Grow for Me”), or the rat-tat-tat rhythms of personal success in “Call Back in the Morning.” He just makes like Sinatra and takes it all nice and easy.

Even the chorus of street-corner singers named after 60s girl groups, Chiffon (Joy Woods), Crystal (Salome Smith) and Ronette (Ari Groover) — women who know where the bodies are buried, literally — take to tunes like “Ya Never Know” with soulful assurance to go along with the booming brassiness. As a result, the musical’s more delicate melodies come through clearer, dearer and more quietly passionate than any previous, happily hammy outing.

Besides, if you’re looking for grand moments, there’s Kingsley Leggs’ growling and deeply funky take on the plant from another planet, Audrey II, and on R&B barnstormers such as “Feed Me (Git It) and “Suppertime.” And then there’s Christian Borle.

A Tony winner for “Something Rotten!” and “Peter and the Starcatcher,” the actor goes into comic overdrive while playing several peripheral characters. The over-the-top standout: the leather jacketed, pompadoured dentist, Orin. As the sadistic boyfriend who brutalizes Audrey, Borle paints a portrait of evil that’s hard to laugh at. But as the mean tooth fairy in a bloodied smock, snicker-singing the likes of “Dentist!” and “Now (It’s Just the Gas),” Borle makes for a harder-edged counterpoint to the subtler and softer charms of Groff and Blanchard.

Directed at a quick clip by Michael Mayer, this “Little Shop” is played out on the small, tight stage of the Westside Theater with an ever-growing, masterfully manipulated plant (kudos to Eric Wright, Teddy Yudain, Kris Roberts, Chelsea Turbin). The close confines give this “Little Shop” the intimacy of home viewing.