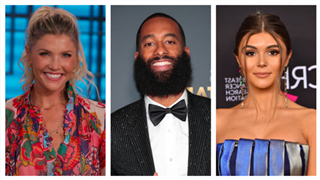 The star power on season 30 of Dancing With the Stars is going to be next level!

Moore will follow in the footsteps of a number of Housewives who’ve formerly competed on the show, including Lisa Vanderpump, Erika Jayne, Nene Leakes, Kim Zolciak-Biermann and Lisa Rinna.

DWTS host Tyra Banks told ET last season that the The Real Housewives of Atlanta star was one of her best friends. She also shut down the “dumb rumors” of a so-called Real Housewives ban on the dance competition show.

“The Real Housewives are some of the biggest stars in this country. So that’s just somebody trying to hate, and there’s a lot of that going on right now,” she explained. “One of my best friends from when I was 19 is Kenya Moore … I’m like, this is somebody trying to stir something up.”

We’re anticipating an emotional dance journey for Kloots as she’s still mourning the loss of her late husband, Nick Cordero, who died last July of complications from COVID-19.

“Today hurts, there is no other way around it,” The Talk co-host wrote on Instagram, on the one-year anniversary of his tragic death. “What happened was unthinkable, losing you was my biggest fear. I used to tell you all the time, ‘Don’t you dare go anywhere. If I lost you, I don’t know what I’d do.'”

Meanwhile, it will be all about redemption for Jade. The 21-year-old daughter of Lori Loughlin and Mossimo Giannulli joins the show following her parents’ highly publicized involvement in the college admissions scandal.

“I think that what hasn’t been super public is that there is no justifying or excusing what happened,” she said at the time. “Because what happened was wrong and I think every single person in my family can be like, ‘That was messed up, that was a big mistake.’ But I think what is so important to me is to learn from the mistake, not to now be shamed and punished and never given a second chance, because I am 21. I feel like I deserve a second chance to redeem myself, to show I have grown.”

James has also made a lot of headlines over the past year for his time on The Bachelor, and his dating life post-show. The reality star recently got back together with Rachael Kirkconnell, whom he originally fell for while filming the show.

By the time After the Final Rose aired, the two had called it quits amid Kirkconnell’s scandal in which she was accused of racist actions in the past. Kirkconnell subsequently apologized publicly multiple times.

Back in July — following reports that they were officially back on again — the two stepped out together for the 2021 Espy Awards in New York City, posing together on the red carpet.

“This is probably one of the fancier date nights we’ve had,” Kirkconnell told ET at the time. “Usually it’s a low-key spot getting pasta or pizza around the city, so I think this is one of the more fancier ones.”

ABC does not comment on casting rumors. The full list of celebrities competing for the mirrorball trophy will be announced Sept. 8 on Good Morning America.

Dancing With the Stars returns to ABC for its 30th season on Monday, Sept. 20. In the meantime, hear more from Siwa about her history-making partnership in the video below.