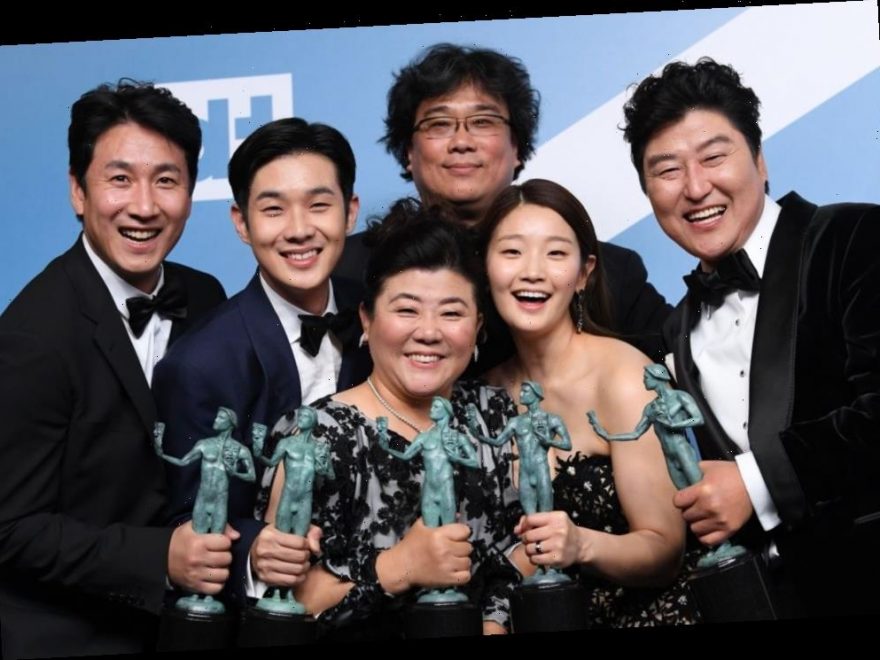 As one Oscar strategist who definitely has a dog in this hunt emailed me Sunday night after the SAG Awards show, “Now we’re having us some fun.” Indeed. What an interesting weekend as far as the Oscar race goes.

With three key guilds weighing in, the verdict on momentum is mixed, but it is clear two films — 1917 and Parasite — got the most mojo in these Oscar precursor shows from the guilds, all of which overlap with the membership of the Academy of Motion Picture Arts and Sciences.

First the predictable: Tonight’s SAG Awards, for which I also participated in Deadline’s live blog, commenting on both the movie and TV winners, has had its off years in forecasting Oscar’s eventual four acting winners (last year the guild only went 2 for 4). But this year I am all but certain, short of a massive shocker on February 9 at the Dolby, that they got it all right. It seems every Sunday the same four actors get to make their way to the stage while everyone else has to just settle for their nomination. It is all but a sure thing, even as we sit 10 days before Oscar balloting begins, that Joaquin Phoenix will win Best Actor, Renee Zellweger will win Best Actress, Laura Dern will win Best Supporting Actress, and Brad Pitt will win Best Supporting Actor, now that they as a quartet have done the same thing at the Golden Globes, Critics’ Choice and tonight at SAG. It is a consistent drum beat for each.

But hold on! SAG stunned by also throwing a burst of momentum that money can’t buy to Bong Joon Ho’s Parasite, which made history in a very big way by taking the Outstanding Cast award at the end of the night, a first for SAG for what was only the second foreign-language film ever to even be nominated in that category after Roberto Begnini’s Life Is Beautiful made it it 21 years ago. Despite the fact that no cast members of South Korea’s Parasite have gotten an Oscar nomination (much like what occurred last year when Black Panther took SAG’s Cast prize), this is unmistakably a tremendous dose of adrenaline to Neon’s Oscar campaign, where it is bidding to be the first foreign-language film ever to win Best Picture.

The Cast prize is said to be SAG’s version of Best Picture, but it isn’t really and the last two Best Picture Oscar winners, The Shape Of Water and Green Book weren’t even nominated for it, but in this case it will likely have an impact.  As I pointed out in the Live Blog that when the Parasite cast came out to present a clip of their film early in the show and got such an enthusiastic standing ovation , it was probably an indication of the upset victory to come. I cannot recall any cast of any nominated movie ever getting that kind of welcome at the SAG Awards for just introducing a clip.  When they actually won, the place exploded and I thought NEON topper Tom Quinn was going to have a heart attack. It was the kind of genuine heartfelt and enthusiastic reaction that might send shock waves through the other contenders.   On top of this Parasite also made history again on Friday night by taking the award for Film Editing for a Drama  at the ACE Eddie Awards, another unexpected win  that also was an eye opener for awards season pundits.  This one-two punch has made the long shot bid by Parasite a much bigger reality.  It is a film you hear many Academy members enthusiastically talk about as their favorite, and that translates into votes. Now that it has SAG and ACE wins attention will only increase.

At last night’s Producers Guild Awards, Parasite was one of the ten nominees for Best Picture, but with a voting system identical to the Academy’s where each movie must be ranked on your ballot in order of preference, it came up short.  The big winner with the PGA was instead the same surprise winner at the Golden Globes for Best Motion Picture Drama, and that was Sam Mendes’ 1917.  In its 30 year history the PGA has correctly predicted Oscar’s Best Picture winner 21 times, a very impressive track record. It first nominated all nine films that went on to get Oscar nominations last Monday as well so the PGA award’s influence cannot be underestimated.  The combination of a Globe and PGA win is what propelled Green Book , from the same Universal/DreamWorks team , to their Oscar Best Picture triumph last year.  And the wins for Parasite at the Eddies and SAG  do nothing to reduce 1917’s chances since  the December 25th limited release was finished too late to even be seen by many in time for SAG’s voting which started in mid-November and its big selling point is not cast-driven anyway, as good as those two lead basically unknown actors are.  Plus because it is  regarded as a “one-shot ” film downplays its chances for editing awards, and in fact it wasn’t even nominated in that category at the Oscars (oddly it did win there at Critics Choice).  The really big showdown now is set up for next Saturday at the DGA  where Mendes and Bong Joon Ho are among the nominees.  A win there for either movie will create almost unstoppable momentum , but not necessarily a fatal blow due to the Academy’s tricky voting system for Best Picture. This is what gives prognosticators ulcers.

Down , but not out this weekend was the Golden Globe (Comedy/Musical) and Critics Choice Best Picture , Once Upon A Time In Hollywood which has topped many prediction lists but lost some steam by not winning at PGA  or taking the Cast award at SAG which I thought it would because it is partly  a movie about actors, one the great majority of SAG members should be able to identify with.  Pitt was a big winner for the film though. It also didn’t factor at the ACE Eddies where it was beaten by Jojo Rabbit in the comedy category, and more troubling it started the week with an impressive 10 Oscar nominations, but a snub in the all-important Editing category.   A win for Quentin Tarantino at DGA could turn it all around instantly but that is no slam dunk, and because he is not a member of the WGA , OUATIH is not nominated for their February 1st awards.  That would only leave BAFTA on Feb 2 as a last opportunity to make some noise before Oscar voting closes.

Netflix has seen better days too,   now suffering three bad Sundays in a row for their hopefuls The Irishman and Marriage Story  which at least has the latter’s  Dern triumphing as Best Supporting Actress consistently as she did tonight at SAG.   Irishman however was shut out completely at the Globes and SAG, and cashed in only one of its 14 nominations , for Best Ensemble , at Critics Choice. Perhaps Robert De Niro’s rousing SAG  Life Achievement Award speech will bring some renewed focus to Irishman even though he personally was overlooked for SAG, Globes,  Oscar or BAFTA nods. There is still the DGA and WGA where that Martin Scorsese film can start to make a case and try to turn it around. But this season is getting shorter by the minute and time is running out.