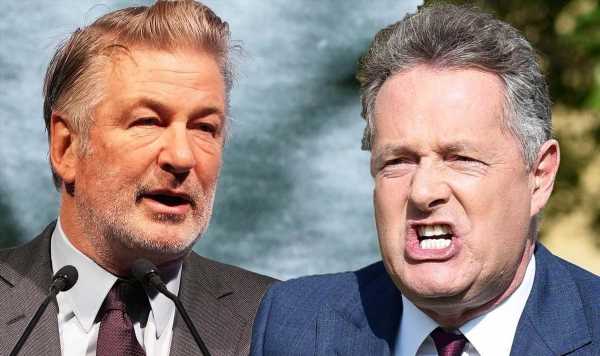 Piers Morgan, 57, took aim at Alec Baldwin, 64, and his wife Hilaria, 39, as he accused them of using the seven children they share as a “PR shield”. The Rust actor accidentally killed cinematographer Halyna Hutchins after a loaded weapon went off in his hand on October 21, 2021.

In an opinion piece in the New York Post, Piers furiously lashed out at the Hollywood star and his wife, Hilaria, over the way they responded to Alec’s criminal charges.

The former Good Morning Britain star theorised that the couple would react in three different ways in order to respond to the widespread controversy.

He also claimed Hilaria, who was born in Boston, Massachusetts, would put on a “fake” Spanish accent – which is something she was previously accused of.

Piers said: “First, they would play the victims, as they have shamefully done ever since Alec Baldwin accidentally shot dead cinematographer Halyna Hutchins on the set of his movie Rust.

“Second, they would cynically use their children as a protective PR shield at the same time as they demanded privacy for those same children.

“Third, Hilaria would once again adopt that fake Spanish accent she deploys for no apparent reason — she’s not Spanish — other than an apparent weird penchant for cultural-linguistic appropriation.” Piers wrote in the new opinion piece.

Piers wrote: “Hmmm. I wonder if the Baldwins’ seven children have other questions for her, like, ‘Mommy, why do you and Daddy keep asking the media to protect our privacy when you two both constantly invade ours on social media to enhance your brands?’ I doubt it, because most of them aren’t old enough to understand just how often, and how cynically, the Baldwins use them as PR tools.”

Express.co.uk has contacted Alec and Hilaria Baldwin’s representatives for comment.

The broadcaster’s claims come after it was reported Alec is set to resume filming for the lead role in Rust despite facing double involuntary manslaughter charges after shooting dead the cinematographer on set.

Melina Spadone, attorney for Rust Movie Productions, LLC, told Fox News Digital that the film is “on track to be completed with Mr Baldwin in the lead role and Joel Souza as director”.

Alec accidentally killed Halyna after a prop gun accidentally went off in his hand, which was loaded with a real bullet, in her direction during the filming of the project in New Mexico in October 2021.

The bullet struck director Joel Souza in the shoulder before fatally striking the cinematographer mum-of-one in the chest.

But it is believed that the actor will still take on the starring role as Harland Rust when production resumes later this month.

The movie will now include “on-set safety supervisors and union crew members, and will bar any use of working weapons or any ammunition”, Spadone said.

David, who handed Alec the loaded gun, has reportedly agreed to plead guilty to negligent use of a deadly weapon, while Hannah, like Alec, has also been charged with involuntary manslaughter.

Hannah is in charge of weapons on film sets and denies responsibility for the incident.

Alec’s lawyers responded to the decision to charge with a statement, saying: “This decision distorts Halyna Hutchins’ tragic death and represents a terrible miscarriage of justice.”

The actor’s lawyer Luke Nikas told the New York Post that Baldwin was “blindsided” by the charges, which he learned about through the media.

He said: “Mr Baldwin had no reason to believe there was a live bullet in the gun — or anywhere on the movie set. He relied on the professionals with whom he worked, who assured him the gun did not have live rounds. We will fight these charges, and we will win.”