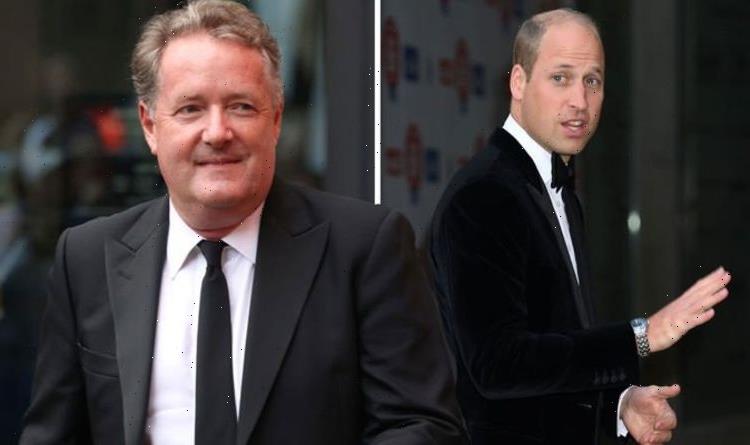 Piers Morgan, 56, was all smiles as he was joined on the red carpet with Virgin Radio presenter Chris Evans, 55, to honour NHS heroes. Prince William also made an appearance at the star-studded event as he stepped out without the Duchess of Cambridge.

The ex-Good Morning Britain presenter posed for pictures after he recently addressed a royal snub.

It comes after the broadcaster admitted to walking out of Prince Harry’s speech at the GQ Awards earlier this month.

Piers looked dapper as he sported a black and white suit at the Who Wins Awards 2021.

The TV star posed for pictures alongside Chris who opted for more casual attire.

The Virgin Radio host donned a pair of jeans teamed with a t-shirt covered by a suede blazer.

He completed his attire with a pair of trainers at the star-studded event.

David Beckham, Prince William and Boris Johnson were also suited and booted, as they honoured Britain’s NHS and healthcare heroes.

The Duke of Cambridge looked smart in a suit with a bow tie as the royal attended the event without Kate Middleton.

It comes after Piers recently confessed he suffered an injury after he walked out of Prince Harry’s speech at the GQ Awards.

The ex-Good Morning Britain presenter revealed he did not want to stick around for the Duke of Sussex’s candid delivery.

The Duke of Sussex made a surprise appearance at the GQ Awards just hours after complaints about Piers’ controversial comments about Meghan Markle were rejected by Ofcom.

The broadcaster said in his column he “felt exhilarated” but the moment was short-lived.

He decided to not stick around for Prince Harry’s speech and made a swift exit.

Piers explained he felt a wave of “agony” after the broadcaster suffered a brutal injury.

“I reeled back in agony, semi-concussed and with a cut opening above my right eye, only to see Harry’s massive head filling a nearby screen,” he added.

“He was smirking right at me,” he added his Daily Mail column.