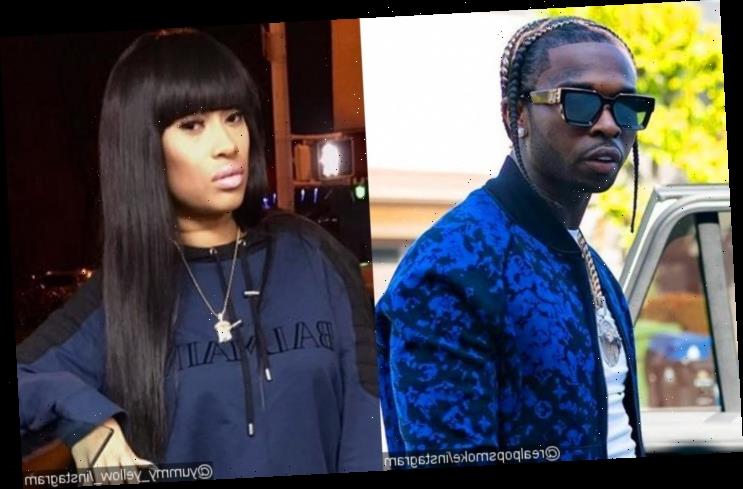 Sharing a video of her cuddling to the slain rapper in bed, Yummy writes, ‘All I could do was smile in these chokeholds cause wen I met him, he dead ain kno how to cuddle.’

AceShowbiz –Pop Smoke‘s girlfriend is unsurprisingly heartbroken after news of his death. The girl who goes by the name Yummy has broken her silence on the rapper’s murder, admitting to struggling to accept that her boyfriend is no longer living.

Taking to Instagram Stories, she shared a screenshot of her text messages with Pop, who promised to marry her one day and have five children and a mansion together. Yummy then followed it up with a black-and-white video of the couple flaunting PDAs inside a car and said in the caption, “Just look how I looked at him bro. I couldn’t stay mad if somebody paid me… he’s so easy to love. How could I be mad at anyone for loving him too? We had a patient love. An understanding love. A growing love.”

The post was followed with a video of her cuddling to Pop in bed. “My peaceful place,” she said. “It’s no way ima find somebody like u. S**t like this don’t happen twice. All I could do was smile in these chokeholds cause wen I met him, he dead ain kno how to cuddle. It took time.”

Comparing their relationship to those of Joker and Harley Quinn, Yummy continued, “I love him not for the way he silenced my demons, but for the way his demons danced with mine. Baby, we gone dance forever.” In another post, that included a video of her kissing Pop on the cheek, she admitted she is “broken. Numb. I feel nothing, but I felt u.” She then added a brokenhearted emoji.

Pop was gunned down in a home invasion in Hollywood Hills, California on Wednesday, February 19. He was then taken to the Cedars-Sinai Medical Center, where he was pronounced dead. Initial reports claimed it was a robbery gone wrong but, according to the people who had seen the surveillance camera, it looked like a targeted hit because the men who broke into the home didn’t seem to carry anything when they left.