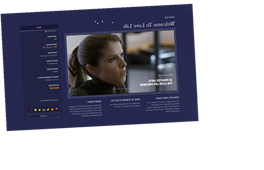 Did HBO Max just provide a preview of what we can expect in the upcoming Oscar campaign awards season (if there is one)?

Last night I attended my first virtual world premiere. The occasion was created online for HBO Max’s upcoming series Love Life, starring Anna Kendrick in an anthology series that features a different protagonist each season revolving around weekly episodes with a new love interest each time. In what may be a harbinger of some of the pandemic-created changes we will see cross over to movie awards season, was this a successful attempt to create the feeling of a real Hollywood or New York premiere at a time when people are not allowed to party or walk physical red carpets, much less sit in a theater together, as would be the normal case for an event like this? HBO has always been a big proponent of holding theatrical-style premieres for their shows, so to see the idea spread to its new heavily hyped streaming service is not a shocker. That they had to do it for your laptop is the new wrinkle that seems to be catching on, if just out of necessity, to beat the show biz drum for now.

Earlier in the week, Bleecker Street held a “virtual premiere” of their new Hulu and VOD dramedy, Military Wives, that featured a live Zoom intro from cast and filmmakers, followed by a communal screening of the film (provided by a link at the appointed time).

On May 14, TNT Events threw a virtual premiere for their new series, Snowpiercer. Last weekend, National Geographic had a “World Premiere Screening” of Barkskins, followed by a panel discussion. On June 2, Abramorama plans something similar with a National Live Streaming Premiere screening and Katie Couric-moderated conversation of their docu, Parkland Rising, tying in with National Gun Awareness Day.

Some are taking it further by providing food, just as you might get at a physical premiere. Amazon did that on May 15 to coincide with their streaming launch of Seberg, calling it “Dinner and a Movie….featuring Seberg.” Dinner from Petit Trois, wine from Helen’s, and all supposedly delivered to your doorstep to do what Amazon calls “an effort to support local, small businesses … while being Safer at Home.” An invite came this week for the same idea from Lionsgate, offering complimentary food and drinks for the premiere of its family comedy, Think Like a Dog, coming directly “to your doorstep via safe contactless delivery,” along with a password-protected screening link code for the film. It also mentions, of course, that the studio would love for participants to share the “dinner and film” opportunity on social media and any media inclusions.

HBO Max is taking the idea of all this and trying to match the feel of a real premiere, and that includes an “after party.” They will be doing it again on Tuesday for their new show, Legendary. Last night’s Love Life featured a short intro to the first two episodes of the half-hour series and the aforementioned after party. The code sent to view that with other virtual attendees also included “after party” admittance to four different “rooms” to explore, just as you might see at a real premiere bash. They included a bar where executive producer Paul Feig mixed drinks, a dance area with DJ Michelle Pesce spinning live from her living room, a so-called matchmaker offering relationship advice to those who opted-in from their homes, and a karaoke room to sing songs from the soundtrack. Among the promotional items supplied by HBO Max for this was a Karaoke mike that was sent along with a dinner for two. The menu, from different restaurants in NY and LA (locally it was the tony Mozza) included vegan or non-vegan items including Antipasti, Pizza, Dolce, Bourbon, Vermouth, and Vino. There were also “Love Life” branded drinking glasses and candles, a love connection game and other party favors.

So did it work? Judging from the non-stop chat room action that was consistently rolling on the right side of the screen, it appeared that premiere-goers were having a great time, many from the show itself, including Feig, who was a frequent commenter as the action played out on the TV set or computer screen. I also noticed some familiar names contributing commentary, including This Is Us co-star Susan Kelechi Watson and Bridget Everett. But if you kept that crawl on, it was the equivalent of being trapped in a theater where everyone was talking back at the screen. The show was fun, but I will have to catch it again, since I am afraid I spent too much time reading what the partygoers were saying about it. According to HBO Max, among those party-goers in “attendance” were Judd Apatow, Leslie Mann, Mindy Kaling, Paris Hilton, Beanie Feldstein and many others.

At one point, someone asked Feig about the renewal prospects for his NBC series, Zoey’s Extraordinary Playlist, to which he texted back that it is looking very good and they have their fingers crossed. See, even a bit of news can happen at these newfangled premieres in the coronavirus age. Overall, you have to give these organizers credit for putting a little showmanship back into Hollywood, which otherwise has the shutdown blues. I am not sure if I could take this kind of “new normal,” and certainly prefer real human connection in person at these things. But you work with what you have, and this was a spirited attempt to handle the cards the industry has been dealt.

Will this be repeated during Oscar season on a larger basis, with Academy voters and others, in order to bring attention to their contenders? I have been asking a number of top consultants whose business it is to run campaigns and deliver the votes. Of course, there are rules in place at the Academy, the most recent being that food receptions have to be basically in the same space, or within short walking distance, as the film’s screening. If those screenings are in your home, and food and drink are delivered to your doorstep is that exactly kosher? It certainly is in the same space, eh? What exactly will new normal be once we hit the fall?

“Nothing will go on like normal. It will be a version of what we used to know,” said one top awards maven, who cautioned about the key demo that tends to reliably turn out to screenings and receptions. “The problem is older folks are scared to death, since they are in the most vulnerable group. What people miss is conversation and the community. If we can find a way to do that it would be a great step. In terms of food, which many come to these events for, would you want to be the one who serves them and then find there has been some sort of exposure to the coronavirus? But the bottom line is mostly they just want conversation and we have to find a way to do that.”

There are interactions with fans that have to be dealt with, and stars might find it hard to resist that kind of adoration. And then also, one of the most visible ways of campaigning is the now ubiquitous Q&A circuit, a past constant during the season. It is all online during Emmy season, which has curtailed their own FYC events that were heavily reception-driven. A lot of these events are aimed at the SAG Nominating Committee and other SAG members. An Apple TV + exec tells me the new streamer did one with SAG that drew well over 800 members online for the screening of an episode of their limited series, Defending Jacob, and Q&A with the stars. That is a much bigger number than they would get for a similar live event in the old normal, and those almost always involved extra expense for the receptions following. They were thrilled, and you can sense that this could be a wave of the future in reaching those voters.

One Oscar campaigner said virtual Q&As and screenings are a definite option, but wonders how they are going to get tune-in, since the reception component has been such a draw in the past. “I predict the volume will taper off. I see people saying, ‘Oh, god, not another virtual Q&A’,” the consultant said, while adding that going to the past way of inviting people to theaters is problematic. “Do you have to wear a mask? You will need much bigger screening rooms to spread people out. You must control capacity without offending voters. And how do we offer the social aspect to get people to spread word of mouth? If the circle is smaller, we will have to lean into people who zoom the most, and I am not sure that is your average Academy voter,” they said. “The key is to get in front of people in interesting ways. We have to remember, this is – or was – their social season. They get excited, then they are devoted, and they talk. But will they do it on Zoom?”

Another consultant with a long history of campaigning over decades is worried on many fronts. “It will definitely be a new way of doing things. A controlled environment, to be sure. And what if there is a shutdown again with a recurrence in the Fall? I am willing to do virtual screenings, but I would say one-third of the Academy is not savvy technically. There should be videos provided with step-by-step instruction to help people. You can’t just do it with a help line., ” they said, adding that maybe it ought to be a uniform service everyone uses, rather than different companies with different methods that just get confusing. Of course, security is key. But the Academy itself now has that in place with their own screening platform. What about on the outside? This vet of the Oscar wars says they like the idea of maybe taking five cities, show the movie for a small audience of voters, and then pipe in live Q&As to them simultaneously. “It should be about the movies. A lot of them (voters) went for the food and the networking. It shouldn’t be about food. It is not about selfies (a common sight at SAG screenings) and sandwiches. I can tell you I don’t think I am going to be serving a lot of food this season. I think actually that’s done for good.”

Overall the feeling seems to be there are major changes, and those changes could become permanent. I recently did a Zoom-style interview with Helena Bonham Carter for an upcoming episode of The Actors Side, and she got to talking about how comfortable she is doing publicity from her living room. “No more junkets. We don’t have to travel around the world now. I can just do it from home. I can get used to this,” she laughed. Junkets? Red Carpets? Premieres? What happens with all of it? “PR reps are going to have a rude awakening,” predicts one such PR rep. “We may not even be able to go to awards shows with our clients. And if we do, are we all going to still be wearing face masks on the red carpet, including the stars?”

Food — or maybe not — for thought as Hollywood begins the journey to reopening to an uncertain future and awards seasons that will look like no other.