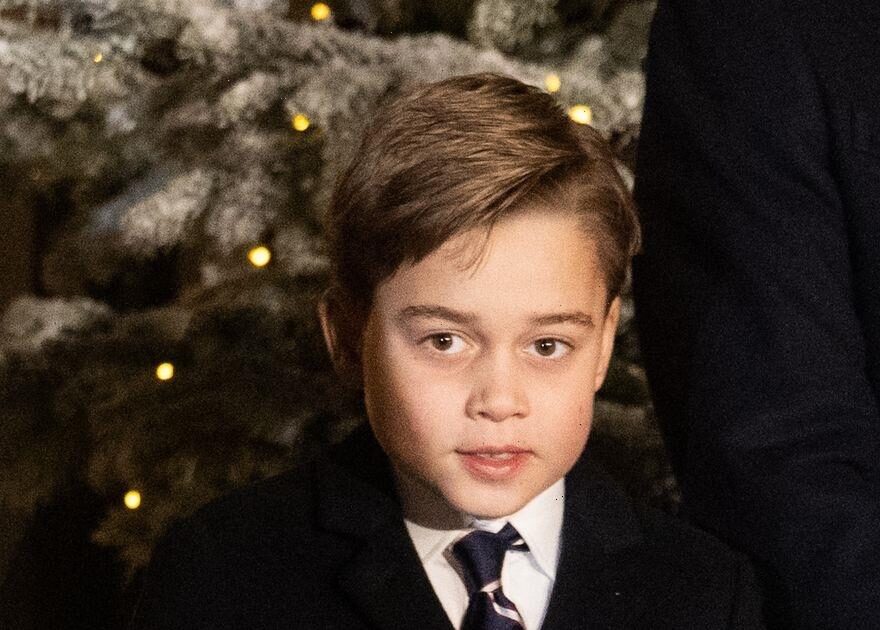 As the Royal family come together to celebrate their first Christmas without her majesty The Queen, we take a closer look back at another festive occasion which was very near and dear to her heart: Prince George’s first ever Christmas at Sandringham.

The Duke and Duchess’s decision to spend their son’s very first Christmas at Sandringham in 2013, was said to have delighted the Queen as this was the first time she and her three direct heirs, Charles, William and George, had gathered for the festivities.

William and Kate were hoping their new home on the estate, Anmer Hall, would be ready in time for Christmas. But with renovations still in full swing, they stayed in the main house with the rest of the royals.

Spending the first portion of Christmas Eve as a small family unit, by early afternoon, William, Kate and George had joined the rest of the family to gather beneath the 18ft Norfolk Christmas tree in the White Drawing Room at Sandringham House.

During the three days long celebration of George's first royal Christmas, all the usual traditions were observed.

There was a timetable, room plans and fun activities, with details about present giving, attending church and even a pheasant shoot.

On arrival at Sandringham, William, Kate and baby George were ushered to their rooms, furnished in the post-war Spartan style, with electric bar fires and blankets.

William then joined his brother Harry for the annual 11-a-side game of football between residents from local village Castle Rising and those from the Sandringham Estate.

Donning his lucky Aston Villa socks – a homage to his favourite club, William and Harry quickly got stuck into the competitive game.

At one point during the match, Harry lunged at his older brother in a crunching tackle, to which William joked: ‘Give him a yellow for backchat!’

After Harry scored and the final whistle blew on the 2-2 draw, the competitive brothers shared a sporting hug.

Kate, who has been a spectator in previous years, stayed at the house with George, until the whole family gathered in the White Drawing Room at 4pm to take afternoon tea, complete with cake and homemade scones.

The Queen always used to use this time to encourage the younger royals to add decorations to the tree – a Norfolk spruce at approximately 20 feet – cut down on the estate.

Following on from the traditional afternoon tea, the family soon moved on to the Red Drawing Room, where trestle tables laden with presents awaited – but only cheap and jokey gifts, rather than expensive or luxury items.

The tradition of opening the presents on Christmas Eve is one the Queen liked to adhere to.

Afterwards – with George in the care of his nanny – the family moved on to the hall for Martinis and cider.

Following a gong at 8pm, a candlelit three-course meal was served, likely to have been lamb or locally sourced game, with men dressed in black tie and women in full-length gowns and jewels.

After dinner, the women moved to another room for coffee, while the men enjoyed liqueurs before everyone reunited for games.

In the past William is said to have livened up the festivities by bringing board games such as Pictionary or suggesting charades, while Harry used to prefer a Wii console.

Following a full English breakfast, the family headed to church and then, on arrival back at the 270-room house there would have been an outfit change before Christmas lunch at 1.15pm.

For their festive meal, the Royals enjoyed a delicious Norfolk turkey with all the trimmings, served alongside a wealth of locally farmed vegetables.

Afterwards, observing tradition, the whole family would have retreated to the Saloon to watch the Queen’s speech at 3pm – minus Her Majesty who used to hate watching herself on TV!

After the speech, Prince Philip raised a toast, and the day concluded with a dog walk around the estate, a buffet supper and some TV.

Some of the exciting viewing choices on offer included Downton Abbey, Doctor Who and Strictly Come Dancing specials, but Downton is likely to have won as William is known to have been quite the fan.

Actor Allen Leech, who played chauffeur Tom Branson in the drama once said: "I was at an event with Prince William and shook his hand. He actually said: 'I’m a big fan of the show – only now that my wife’s had a baby!’"

When packing for Sandringham, Kate would have needed to plan for five outfit changes – a casual number for breakfast, a smart outfit and hat for the morning church service, a dress for lunch, a cocktail dress for early evening drinks and a full length frock and jewels for the evening meal – with nothing too short or too revealing!

She also needed coats and boots for walks and had previously revealed that she was nervous about the numerous outfit changes.