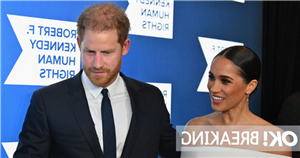 Days after the release of the second volume of Harry & Meghan, the trailer for the couple's new show has been released, with it set to premiere globally on 31 December.

The Duke and Duchess of Sussex will present the series, Live to Lead, which looks at some of the most influential leaders throughout history.

The series is being produced by Blackwell & Ruth in association with The Nelson Mandela Foundation and the Sussexes’ production company, Archewell and Cinetic Media.

In the teaser, Harry explains how the series was inspired by former South African President Nelson Mandela, using his quote: "What counts in life is not the mere fact that we’ve lived…"

Meghan, 41, then adds: "It is what difference we have made to the lives of others that will determine the significance of the life we lead."

"It’s about people who have made brave choices…" Harry responds, to which his wife adds: "To fight for change and to become leaders…"

The teaser concludes with: "And for giving inspiration to the rest of us, to live, to lead."

The show will also include features from leaders in sectors other than politics, like climate activist Greta Thunberg and feminist activist Gloria Steinem.

Speaking on the release, director Geoff Blackwell said: "We have been Mandela’s publisher for over a decade and we are fortunate to have a close relationship with the Nelson Mandela Foundation.

"When we approached them, they warmly agreed to join us in seeking out these inspiring individuals and asking them to agree to be interviewed.

"The experience of interviewing them and sharing their stories has been an enriching one for all of us.

"Through their example, these leaders remind us of our own capacity for leadership and the best part of our humanity at a moment when the world needs true leaders, more than ever."

This comes after the two-part release of Netflix's Harry & Meghan, which covered everything from Harry and Meghan's exit from royal life to their life now in California with children Archie and Lilibet.