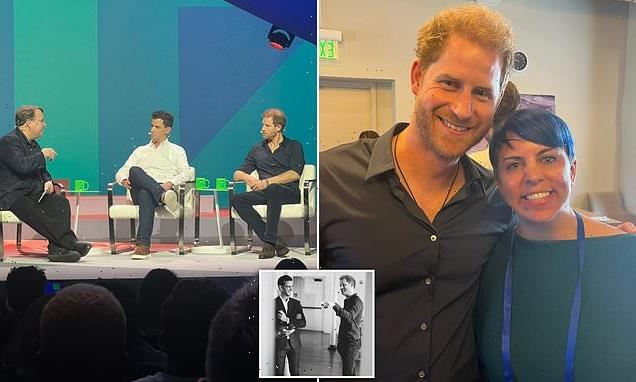 Prince Harry has made a surprise appearance at a mental-health summit in San Francisco where he spoke about the ‘power of therapy and coaching’ just hours after Meghan Markle’s latest bombshell interview.

The Duke of Sussex, 38, took to the stage last night at the annual Masters of Scale Summit which promises to connect the ‘most forward-thinking, fast-scaling business leaders in an environment designed to cultivate innovation’.

The father-of-two appeared on a panel alongside BetterUp founder Alexi Robichaux.

Prince Harry has been working as Chief Impact Officer for the $4.7 billion mental health start-up since March of last year.

The pair were joined by podcaster and entrepreneur Reid Hoffman who interviewed them about how the brand encourages its users to achieve peak mental fitness. 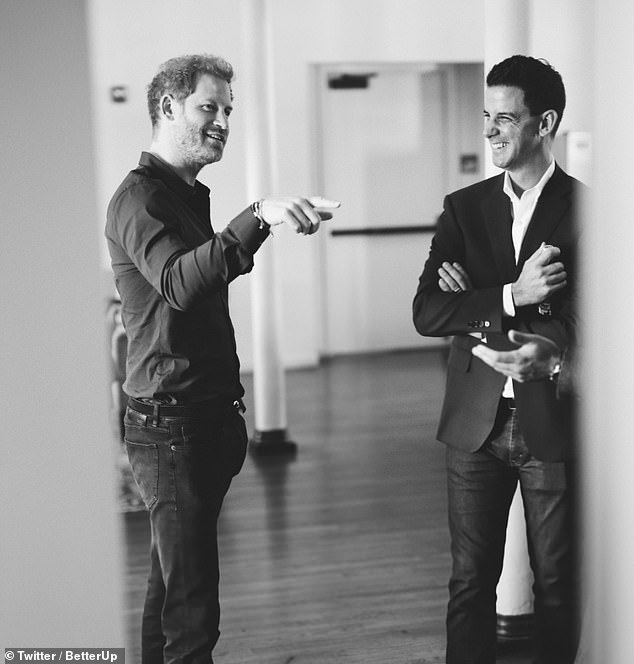 Ahead of their panel, Better Up’s official Twitter account teased followers about their special guest with a photo of Prince Harry and their founder Alexi Robichaux chatting back stage. 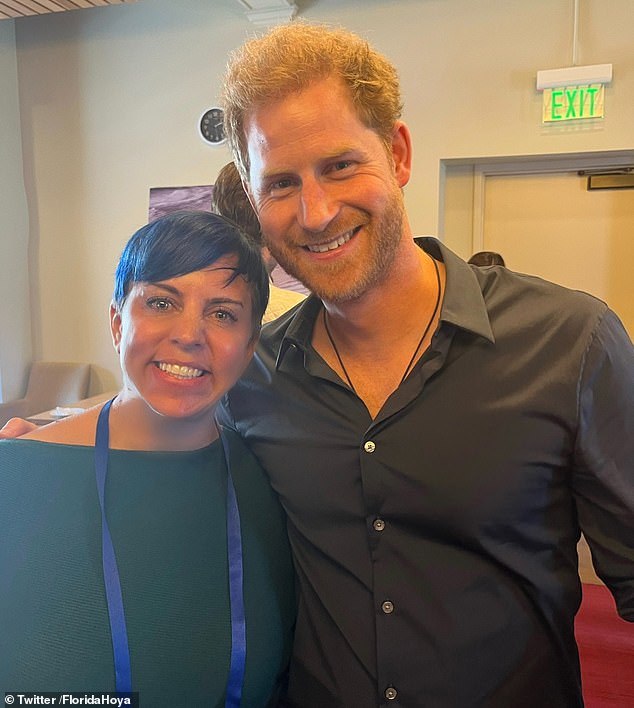 Prince Harry – pictured with Axios’ Chief People Officer Dominique Taylor – posed with guests at the invite-only conference in San Francisco after his panel ended. The Duke of Sussex opened up about the ‘power of therapy and coaching’ during 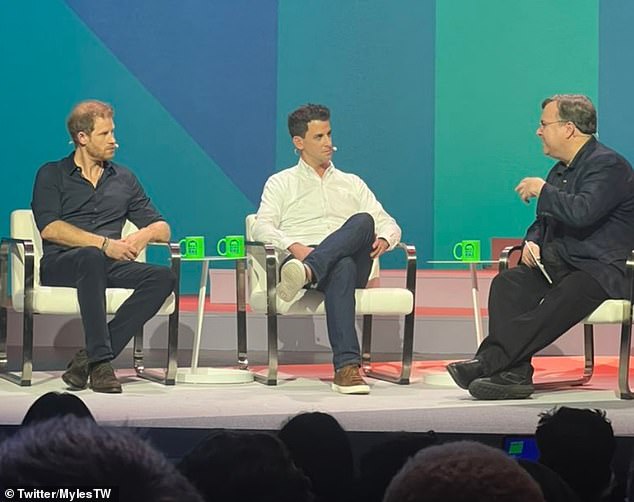 The father-of-two (left) appeared on a panel alongside BetterUp founder Alexi Robichaux (middle). The pair were joined by Reid Hoffman (right) who interviewed them about how the brand encourages its users to achieve peak mental fitness.

Ahead of the event, Better Up’s official Twitter account teased followers with a photo of Prince Harry and their founder chatting back stage.

They wrote: ‘BetterUp CEO Alexi Robichaux and Reid Hoffmam are about to take the stage at the Masters of Scale Summit to discuss why leaders need to focus on their mental fitness.

‘Any guesses who might be joining them for a surprise appearance?’

Once their panel had finished, Prince Harry then took time to chat with guests at the conference – which operates on an invite-only basis.

Posting a photo with the Duke on Twitter, Axios’ Chief People Officer Dominique Taylor gushed: ‘Impossible to pick 1 fave from an epic 1st day at the Masters of Scale Summit so here’s two.

‘1. Ariana Huff declaring “HR leaders are now the most important execs in a company”

‘2. talking to Prince Harry about the power of BetterUp’s therapy and coaching.’

The Duchess of Sussex Meghan Markle lays on the ground in a £4,657 Jason Wu dress

Appearing on Apple TV’s The Me You Don’t See last year, Prince Harry revealed he has ‘always felt worried’ for most of his life when he flies back to London, but only became aware of this after doing therapy.

He was filmed having Eye Movement Desensitisation and Reprocessing (EMDR) therapy, which aims to help someone come to terms with trauma. This saw Harry carry out a series of movements such as closing his eyes and crossing his arms while remembering past events.

During him and Meghan’s Oprah interview in March 2021, the Duke revealed that his wife had given him the strength to begin therapy.

‘I knew that if I didn’t do the therapy and fix myself that I was going to lose this woman who I could see spending the rest of my life with.’ 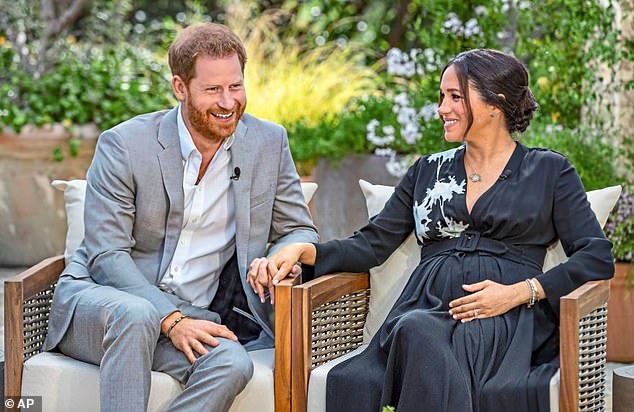 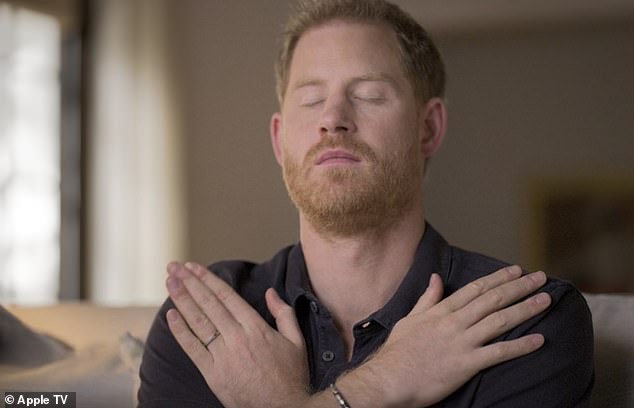 Prince Harry – pictured at his Montecito home in May 2021 – was filmed having (Eye Movement Desensitisation and Reprocessing) EMDR therapy on the Apple series The Me You Don’t See. The treatment aims to help someone come to terms with trauma

‘When she said, ‘I think you need to see someone,’ it was in reaction to an argument that we had. And in that argument, not knowing about it, I reverted back to 12-year-old Harry. The moment I started therapy, it was probably within my second session, my therapist turned around to me and said, ‘That sounds like you’re reverting to 12-year-old Harry.’

Although CEO Alexi has never revealed how much Prince Harry has been paid for his role as Chief Impact Officer, similar roles at other California firms would command six or seven-figure salaries.

The Duchess of Sussex spoke to the American publication about a wide-range of issues including ‘misconceptions’ about her since she married her royal husband in 2018 – especially after the Oprah interview – and claiming their ‘love story’ had inspired the world because ‘people love love’.

Meghan took part in a glamorous photo and video shoot for the magazine where she wore a £4,657 Jason Wu dress and other expensive outfits and was filmed laughing and joking and even lying on her stomach kicking her legs with apparent excitement. She also wore a $2990 Carolina Herrera dress and a $1,560 Galvin gown for the photoshoot.

In a feature headlined ‘Meghan Markle Lets Her Guard Down’, the Duchess spoke first about her recent trip to the UK with Harry where their pseudo-royal tour was interrupted by Her Majesty’s death aged 96 on September 8. 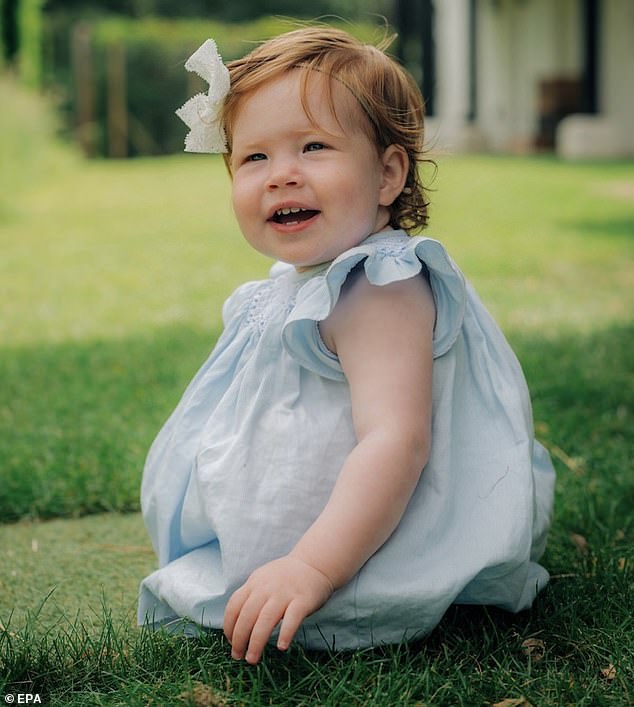 Acknowledging that Archie and Lilibet’s family connections might give them a headstart, Meghan stressed that it still takes ‘talent and grit’ to be successful. Liliet pictured in June 2022 ahead of her first birthday

But in a hint that her death had been troublesome for Harry, who reportedly found out about the passing of his grandmother the just five minutes before the rest of the world, she said of the days and weeks afterwards: ‘It’s been a complicated time, but my husband, ever the optimist, said: “Now she’s reunited with her husband”.’

When quizzed about a potential return to acting, Meghan initially shut down the question with: ‘No. I’m done.’

But on second thought, the Duchess decided not to rule it out entirely.

She added: ‘I guess never say never, but my intention is to absolutely not.’

Stressing that she’d never ‘given much thought’ to the prospect of another actress playing her one day, Meghan said that they will most likely only know the ‘caricature’ of her.

What’s more, the Duchess said she would be encouraging if Archie, three, and Lilibet, one, wanted to pursue a career in entertainment.

She added: ‘When you become a parent, you genuinely want your kids to find the things that bring them complete joy. They’re our kids, obviously, and they’re part of a legacy and a tradition and a family that will have other expectations.

‘But I want them to be able to carve out their own path.’