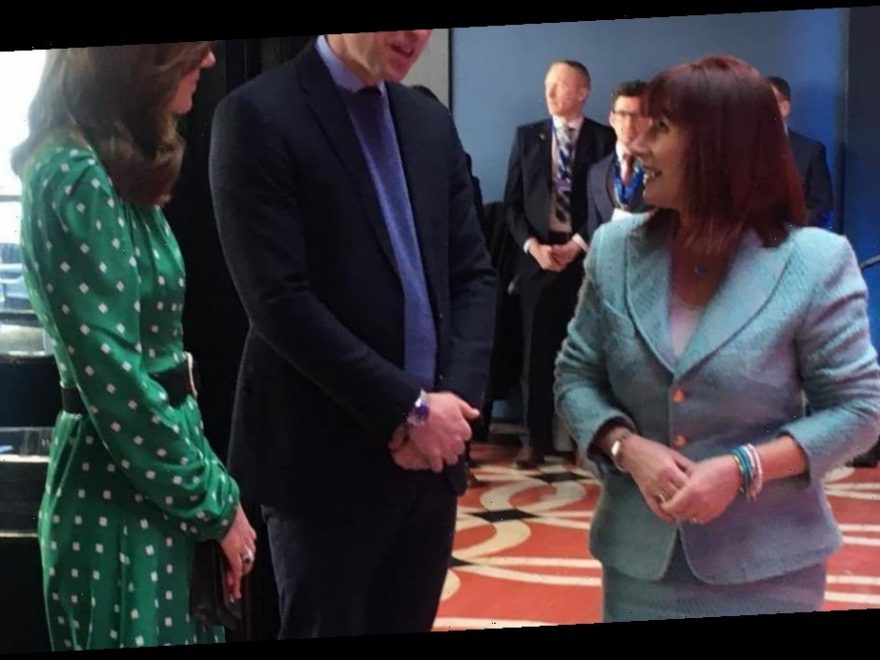 Prince William impressed wife Kate with his juggling skills as the couple kicked off the third and final day of their trip to Ireland.

The Duke and Duchess of Cambridge are in the Galway – which will host the European Capital of Culture this year – to see some of the incredible things they have planned to showcase the country's rich and diverse culture.

Crowds lined the streets to catch a glimpse of the royal couple, whose arrival was delayed by an hour after fog caused issues with their planned helicopter flight from Dublin.

Kate is wearing a green dress by Suzannah and black boots, while William is in a black blazer over a blue jumper and shirt.

Shortly after they arrived at Tribeton, Wills tried his hands at some circus skills. While he managed to juggle with three balls, four proved too much and he immediately dropped them all on the floor – making Kate and the rest of the room laugh.

Then then popped into a pub before meeting well-wishers who have waited hours to catch a glimpse of the royal visitors.

The couple's three-day trip is their first joint visit to the country, and they've had a packed schedule including meetings with politicians, charity visits and of course a stop at the Guinness Storehouse.

Last night William spoke at an event where he recalled growing up "remembering the Troubles" in Ireland and said there were "many wrongs" in the UK and Ireland's "complex history".

He added: "This explains why one of the truly profound moments for Catherine and I took place yesterday when we laid a wreath at the Garden of Remembrance.

"It was a reminder of the complexity of our shared history, and as my grandmother said during her visit in 2011, ''our islands have experienced more than their fair share of heartache and turbulence."

The couple also had time to enjoy a romantic clifftop walk together after a packed second day of engagements.

They walked hand in hand as they took in the stunning coastline of Howth in the popular tourist spot north of Dublin.

In brilliant winter sunshine, the royals looked happy and relaxed as they walked to the trail summit where they were met by Irish environment minister Richard Bruton.

After meeting the couple the politician said: "They remarked on how you couldn't come to Ireland and not see the coastline so they got their wish.

"And they saw it in a benign light, normally there is a wind howling – it's really beautiful today, they couldn't be luckier."

Earlier in the day they visited a cattle shed at the Teagasc Animal and Grassland Research Centre in County Meath.

The couple were shown around the centre by Edward O'Riordan, Enterprise Leader, who explained the two main aims of their work were to explore more sustainable beef farming and study the molecular biology of the animals.

Mr O'Riordan described the royals as a "charming" and "lovely" couple.

They also helped prepare the dish of the day for a group of youngsters in Ireland – after popping to a shop to teach the children about budgeting.

William and Kate joined 13-year-olds Simon and Molly to visit a village shop to buy ingredients for vegetable soup.

Their trip to the Londis store in Prosperous, County Kildare, was supposed to be a secret but by the time they got there around 200 villagers had gathered outside to see them.

William stopped to take a selfie with Jennifer Malone, who gave him a bunch of daffodils for his wife.

Before they set off, the Cambridges inspected the fridge with the youngsters and checked the ingredients needed for the soup – all designed to teach the children life skills.

William said: "There's only one leek. Do we have to stick to the menu?"

He then told the others in the kitchen: "We're going to shop for you. We'll be back in a minute. We'll bring back all the wrong ingredients."

The couple, who had 20 euro (£17) to spend, returned 15 minutes later with a bag of provisions including brown bread, butter and leeks.

After washing their hands, they donned aprons to help Simon and Molly, and Owen, 13, and Chloe, 15, prepare the meal for around 16 children and relatives.

The Cambridges asked the children about whether they cook at home and what food they like.

As they washed and peeled carrots, Kate asked: "Do you cook any vaguely healthy things?"

William asked the boys if they like pancakes, following Shrove Tuesday last week, and added: "I tried to get my children to eat pancakes but they weren't so interested this year. Maybe next year."

Later, the couple played a game of table tennis with other young people who are supported by Savannah House, a respite centre run by social justice charity Extern.

The duchess quipped about their cocker spaniel, Lupo: "We try to do this at home but our dog keeps catching the ping pong balls."

Each year around 300 children from across Ireland stay at the centre in Clane, County Kildare, for a maximum of three nights at a time to have a break from problems at home or while they are in care.

Before the couple left they sat down with another group of children to help decorate bunting with their own personal messages on what they like about Savannah House.

When they touched down in Ireland on Tuesday, Kate and William were greeted by President Michael D Higgins and First Lady Sabina.

Kate stunned green and while shaking hands, Sabina told Kate: "Delighted to welcome you. You've had lots of exciting things happening in your family."

But the comment clearly didn't worry Kate too much, who beamed for cameras alongside their hosts before later going on to enjoy a pint of Guinness at the Guinness Storehouse.

Kate and William's visit also comes ahead of Meghan and Harry's final official engagement as they prepare to step down as senior royals.