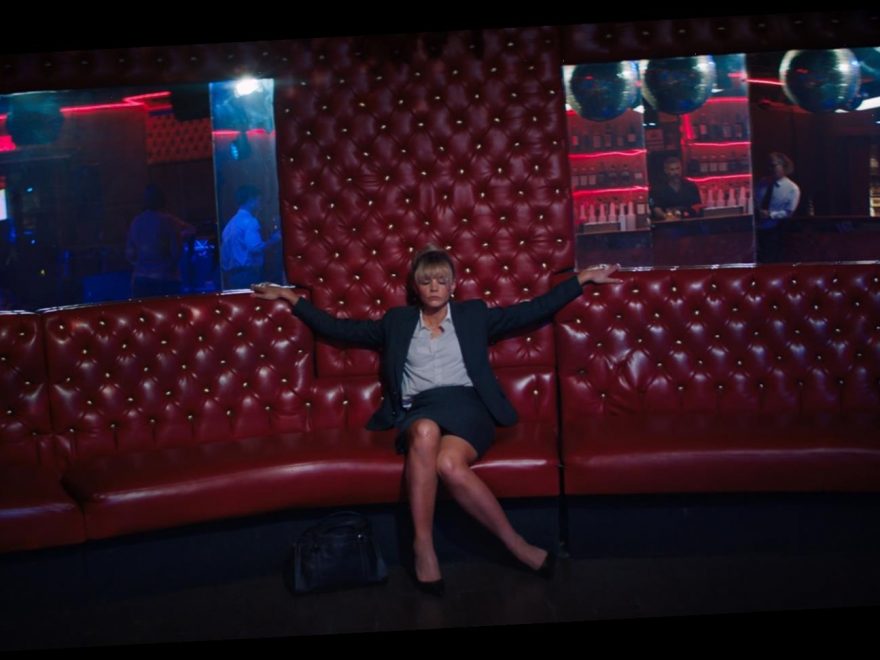 Thank both Fennell’s wicked mind and star Carey Mulligan’s somehow even more wicked performance for that: cooked up by Fennell (best known to American audiences for her go-round as the second season showrunner for clever spy hit “Killing Eve”) and dizzyingly embodied by an incendiary Mulligan, Cassie is an anti-heroine for our times, and a wholly unique one at that.

First spotted by both the audience and a roving pack of “nice guys” at a local club, Cassie is woozy and boozy and nearly keeled over on a shiny red booth. When one of the understandably concerned (yeah, right) dudes (a perfectly cast Adam Brody, one of many smart casting choices made by Fennell) approaches Cassie to see if she’s okay, the night turns foreboding. And yet Cassie is never not in control, as Brody’s Jerry paws at her seemingly blackout drunk body, all while promising that he’s a nice guy, one of the good guys, and she’s safe now.

Cassie is safe, but only because she’s not actually drunk, and she’s about to dole out some righteous fury on the icky Jerry. It’s her game, we soon learn — Fennell hints that she’s not the only one prowling local bars and clubs for gross men, a tantalizing bit of world-building — though the details of Cassie’s particular brand of justice remain vague until later in the film. Wounded after a horrific act of violence against her beloved best friend, Cassie has been using her wiles (and her notebook) to teach some serious lessons to bad dudes for quite some time, punishing predators while avoiding the real villain of her life.

In the years since the incident (the details of which are slowly meted out over the course of the film), Cassie has crumbled into a person wholly consumed by her need for revenge, no longer the titular promising young woman she used to be. The introduction of an acquaintance from her misbegotten med school days (a charming Bo Burnham) offers both an unexpected hope (that she might have finally found a nice guy to fall for) and new information that only pushes her missions to more targeted ends.

As Cassie attempts to balance two very disparate parts of her life, Fennell’s panache for genre-bending absolutely rules, and “Promising Young Woman” manages to be funny and sexy and smart and absolutely terrifying, all in one stylish package. While audiences are naturally sympathetic to Cassie, the lens by which we experience the deliriously demented, candy-colored world of “Promising Young Woman,” Fennell and Mulligan are unafraid to take her into territory dark enough to question if she’s actually the film’s antagonist, the wrong person to root for. It’s a tricky gamble, and while it doesn’t always pay off, when it does, the only people having more fun than Fennell and Mulligan are their tuned-in, vibed-out audience.

The film is filled with inspired soundtrack choices — a strings-heavy take on Britney Spears’ “Toxic” teases before it reveals itself at the perfect moment, and an amusing use of an “It’s Raining Men” cover sells Fennell’s pitch black sense of humor early on — adding a level of care that is sometimes lacking in other elements of the film. Early editing choices are shoddy, and there are a number of notable missteps when it comes to stitching different takes together. Fennell’s biting script is occasionally punctuated with some big jumps and iffy payoffs, and Cassie’s short-lived turnaround is inspired by an unbelievable and thinly written sequence that doesn’t match the rest of her carefully planned missions.

Fennell’s biggest jump, however, is also the most satisfying. While the film is rarely predictable in its choices, Fennell saves her (and Cassie’s) biggest surprises for its combustible final twenty minutes, taking risks that are admirable even when they don’t seem as if they’re going to pay off. Fennell’s flair for visual humor is apparent throughout the film — the rococo nightmare that is Cassie’s parents’ house is ten times funnier than it needs to be, only getting better and weirder with each visit — but she saves her best bits for last, when her most ambitious ideas coalesce into a wicked final twist that leaves one hell of a mark.

“Promising Young Woman” premiered in the Premieres section of the 2020 Sundance Film Festival. Focus Features will release it on April 17.