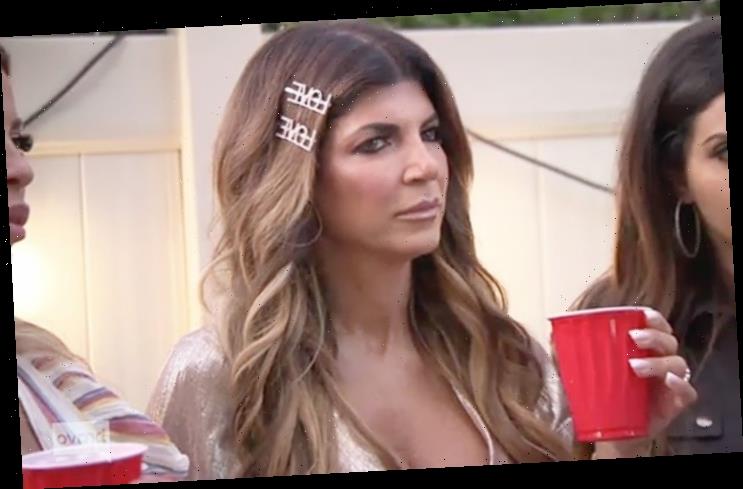 In a sneak-peek at the upcoming episode, Teresa is seen having a meltdown after co-star Melissa Gorga spills the tea about her shocking involvement in the hair-pulling drama.

AceShowbiz -The season finale of “The Real Housewives of New Jersey” will be an explosive one, thanks to Teresa Giudice. In a sneak-peek at the upcoming episode, Teresa is seen having a meltdown after co-star and sister-in-law Melissa Gorga spilled the tea about her shocking involvement in Danielle Staub and Margaret Joseph‘s hair-pulling drama.

“Danielle told me Steven Dann told her to pull Margaret’s hair,” Melissa tells everyone as they gather for a backyard barbecue at the Jersey Shore. For those who need a refresher, Melissa was referring to the hair-pulling incident at a boutique when Danielle yanked Margaret’s hair after the latter poured a drink on her.

“I don’t believe that for two f***ing seconds. Why would Steven f***ing Dann tell her to pull my hair?” Margaret responds before asking Melissa what else that Danielle tells her. “She was on the fence and said, ‘I don’t know. Should I? Should I?’ And then you said, ‘Do it,’ ” Melissa continues while pointing directly at Teresa.

While the ladies are looking at each other in shock, Teresa nervously asks, “She said that?” Margaret then quips, “I don’t believe it. You would never do that!” with Dolores Catania adding, “This is Danielle 101. She’s making stories up as they went along!”

When Melissa asks Teresa if Danielle lies, Teresa looks flustered and says, “I don’t even…I remember her saying something to me…I don’t know…I was drinking. And everything happened so fast.” In response to the shocking revelation, Dolores admits in a confessional, “Holy s**t. This is so crazy to me. I mean I know Teresa has had her issues with Margaret. But it never crossed my mind that she would be part of this hair pulling.”

Meanwhile, Margaret is furious at Teresa. “I’m a little freaked out. I’m not gonna lie. Why would you ever tell her to pull my hair? How sick is that? You f***ing love this girl so much that you;re gonna f***ing just let her hurt me? For what? For what?” Margaret ranted. “You’re a real f***ing a**hole. I’m like f***ing freaked out. This is your f***ing friend? This is who you wanna associate with?”

“I mean, I feel bad. I hope they don’t use this,” Teresa says as Margaret storms off. “They are gonna use it,” Melissa tells her. That prompts Teresa to flip the bird to a cameraman before throwing her red solo cup that ends up soaking Dolores. Looking so pissed off, Teresa storms off.