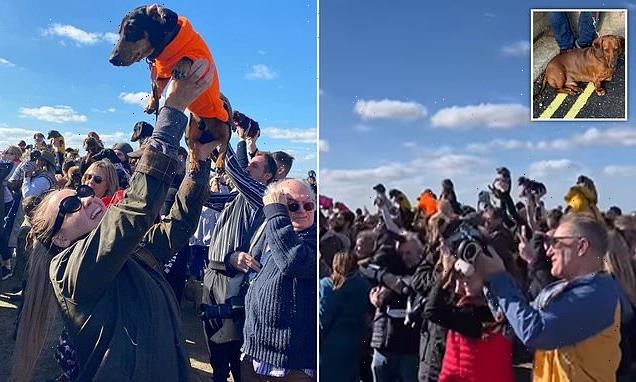 Paw-fect day out! Thousands of sausage dogs gather for a puppy RAVE on beach in Southwold – as a record-breaking 2,238 dachshunds go on a walk together

Thousands of adorable sausage dogs embraced their party spirit as they bopped along at a rave on the beach – during an attempt to break the world record for the most puppies of a single breed in one place.

A whopping 2,238 dachshunds met on the Denes Beach in Southwold on Sunday, as the adorable weiners tried to break the world record for the most dogs of a single breed at a walkabout.

The previous world record was held by Merseyside beagle club Beaglelandia, who organised for 1,029 beagles to meet on April 22, 2018.

The club will hold that record until the Southwold Sausage Walk’s record is verified by the Guinness World Records.

A sea of sausage dogs bopped along to Neil Diamond’s Sweet Caroline, with the alternative words of ‘paws touching paws’ as they partied under a brilliant blue sky.

Stuart McBurney, 42, was one of the organisers of the yearly walk, which has raised around £10,000 for sausage dog charity Dedicated to Dachshunds with intervertebral disc disease (IVDD) since 2017.

After this year’s walk, he told FEMAIL: ‘They are lovely dogs and the turnout was just phenomenal.’ 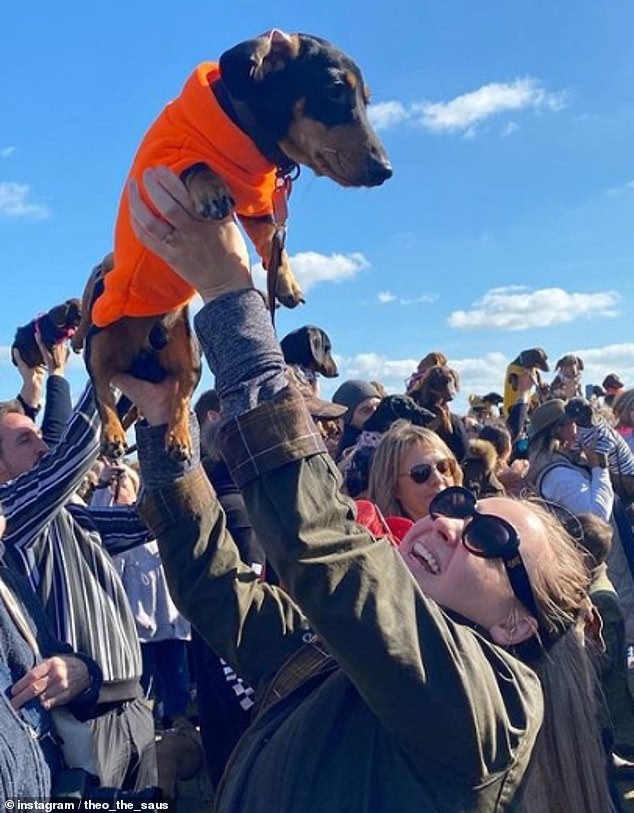 Theodore the sausage dog, who is days from turning two, was one of the thousands of dachshunds partying at the beach (She was lifted above the crowd at the sausage rave by his owner, Jade Dedman, 29) 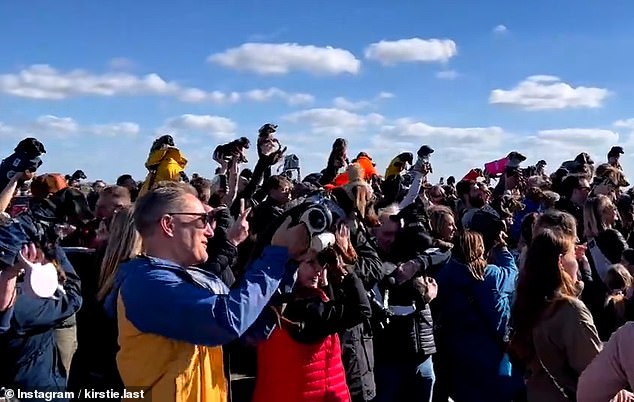 A sea of sausage dogs bopped along to Neil Diamond’s Sweet Caroline, with an alternative words of ‘paw touching paw’ as they partied under a brilliant blue sky 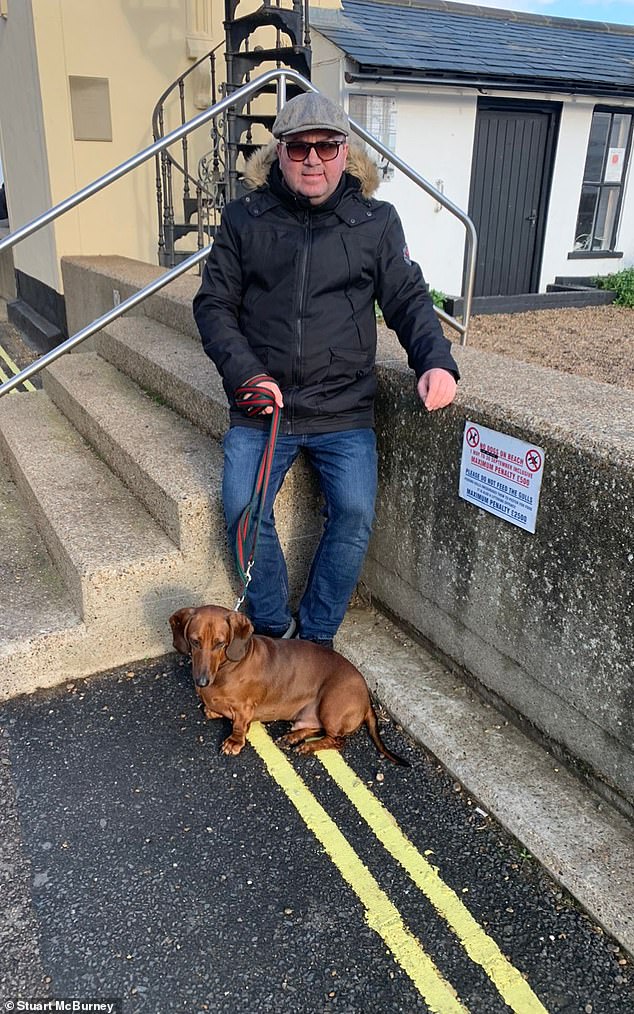 Stuart McBurney bought his sausage dog Eddie, four, (pictured together), who has helped him through a breakdown

‘The weather was nice and and Southwold is a beautiful place. It was emotional. I always cry. I’m a big softie really.

Stuart first got involved with the Southwold Sausage Walk, which was founded by dog lover Laura Baggott, after he began struggling with his mental health.

He said: ‘I bought myself a sausage dog and he helped get my confidence back.

‘I went to a sausage dog walk and Laura and her mother were organising it. 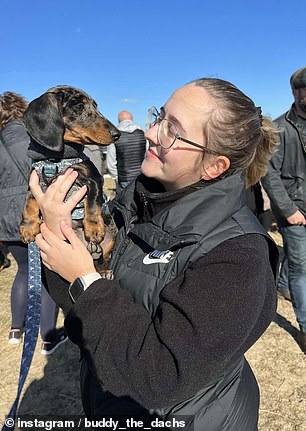 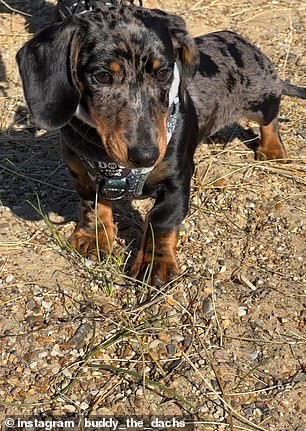 Kiki Hart, 23, from Dereham, also went on the walk, where she was joined by her four-month-old sausage dog Buddy (pictured together on the walk) 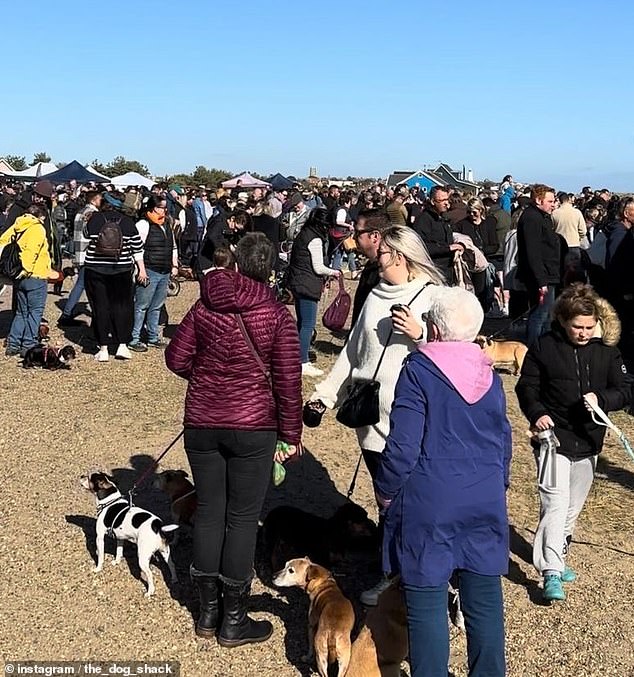 ‘Her dog Percy had got IVDD and he was nearly paralysed by that point. He got stronger and better each day and I thought if that little dog can do it so can I.’

Since the walk, Stuart said his four-year-old sausage dog Eddie has been exhausted and sleeping almost constantly.

However, he has big plans for what’s next for the walk.

He hopes to have a ‘mega festival’ for sausage dogs and said they were even considering having a ‘statue of a sausage dog in Southwold.’ 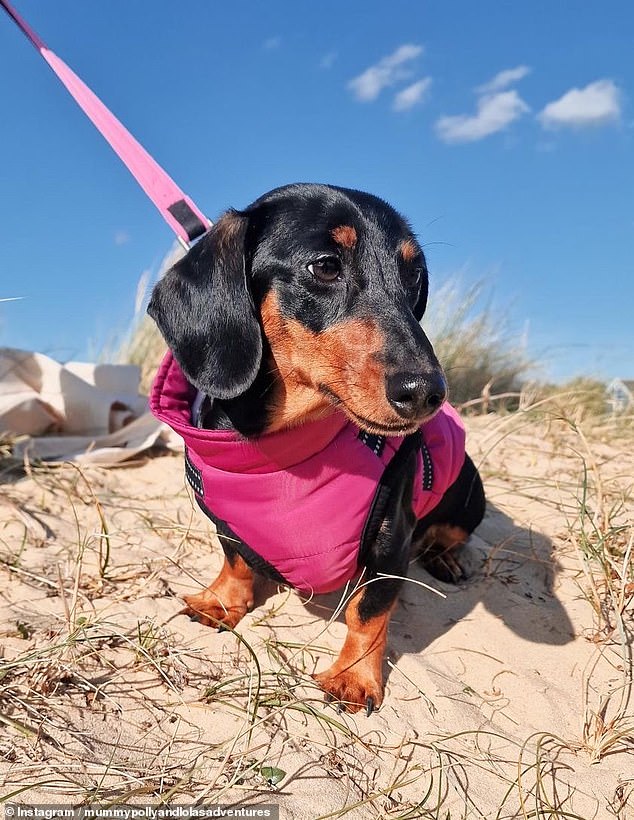 Thousands of gorgeous sausage dogs got together for a beach rave in Southwold this Sunday. Pictured: Eight-month-old dachshund Tilly

Jade Dedman, 29, was at the walk and the sausage rave afterwards with her one-year-old daschund Theodore, which she said was ‘brilliant’.

Jade said: ‘As they are all so small we were asked to hold them up high so they could be seen.

‘In the end it looked like a sea of meerkats.’

Sophie Pleszko, 33, from Norfolk, was one of the thousands of people who went on the walk. 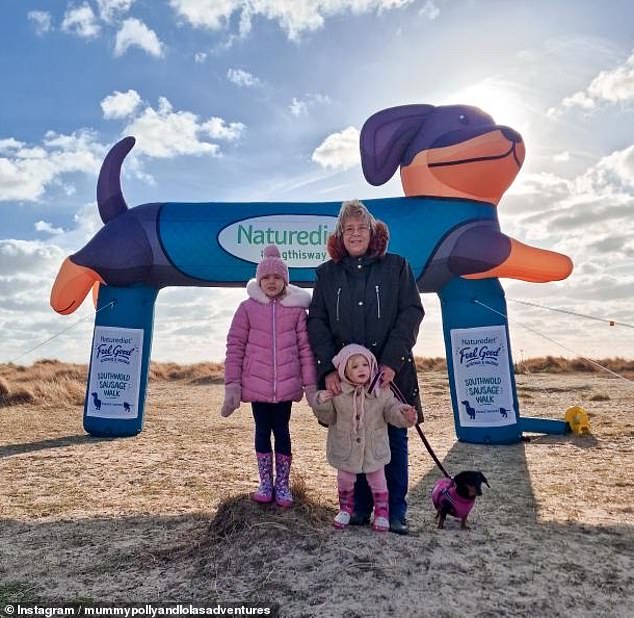 Sophie Pleszko, 33, from Norfolk, was one of the thousands of people who went on the walk. She strolled along the beach with her two children Polly, 6, and Lola, 2, as well as her mother Heather Ladell, 71, (pictured with her grandchildren and eight-month-old sausage dog Tilly)

She strolled along the beach with her two children Polly, 6, and Lola, 2, as well as her mother Heather Ladell, 71, who brought her eight-month-old sausage dog Tilly with her.

Organisers also made space for daschund businesses to set up stalls for dog owners as well as party the afternoon away to the dulcet tones of Neil Diamond’s Sweet Caroline.

Kiki Hart, 23, from Dereham, also went on the walk, where she was joined by her four-month-old sausage dog Buddy.

Kiki said: ‘We went along because we were excited for Buddy to meet lots of other sausages! It was so much fun and we loved all the little stalls.’ 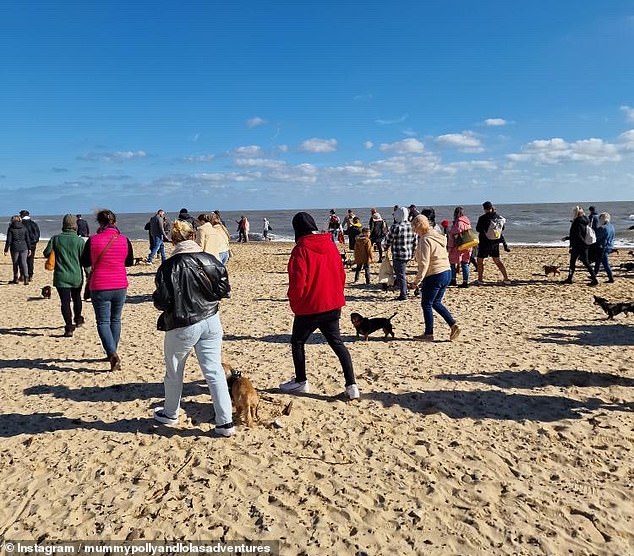 There were a record 2,238 sausage dogs on the walk. Since the Southwold Sausage Walk started in 2017 the team has raised around £10,000 for dachshunds with IVDD 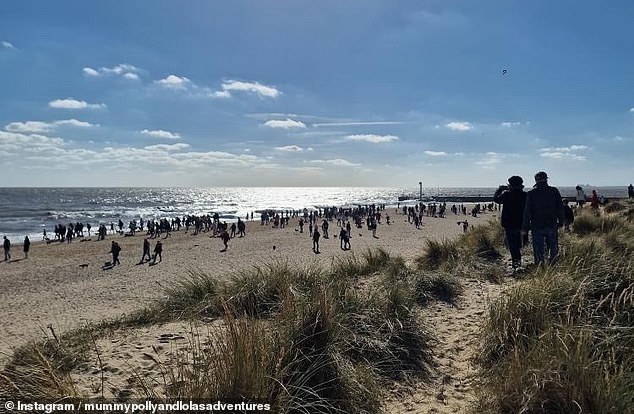 It was a beautiful, sunny day and many of the sausage dogs were left exhausted after spending their time playing with their newfound friends

Claire Corridan, who has been a vet for 23 years, said dachshunds are at higher risk of IVDD because of their conformation.

Symptoms can include pain in the neck, spine and limbs as well as neurological weaknesses that affect bladder control and coordination.

She said if dogs cry or are ‘reluctant to be handled or lifted’ it could be a sign they are suffering from IVDD.

‘There are kennel club schemes available to reduce the prevalence for breedings dachshunds and this requires X-rays of the spine by veterinary experts.’

The condition affects one in four dachshunds.

Onset is most likely to happen between the ages of four and seven in sausage dogs.

In the dog suffering from IVDD, the discs that sit between the vertebrae of the spine bulges or bursts into the spinal cord space.

The symptoms of IVDD are varied and all dogs differ in the way they present, ranging from mild pain to paralysis.

If a dog is starting to show signs of IVDD then he or she should be checked by a vet.

Most cases need prescribed medication including painkillers, plus confinement to a non-slip pen or crate to reduce risk of further injury.

To encourage breeding of dogs with a lower risk of IVDD, dachshunds between the ages of two and four can be X-rayed through the UK screening scheme.