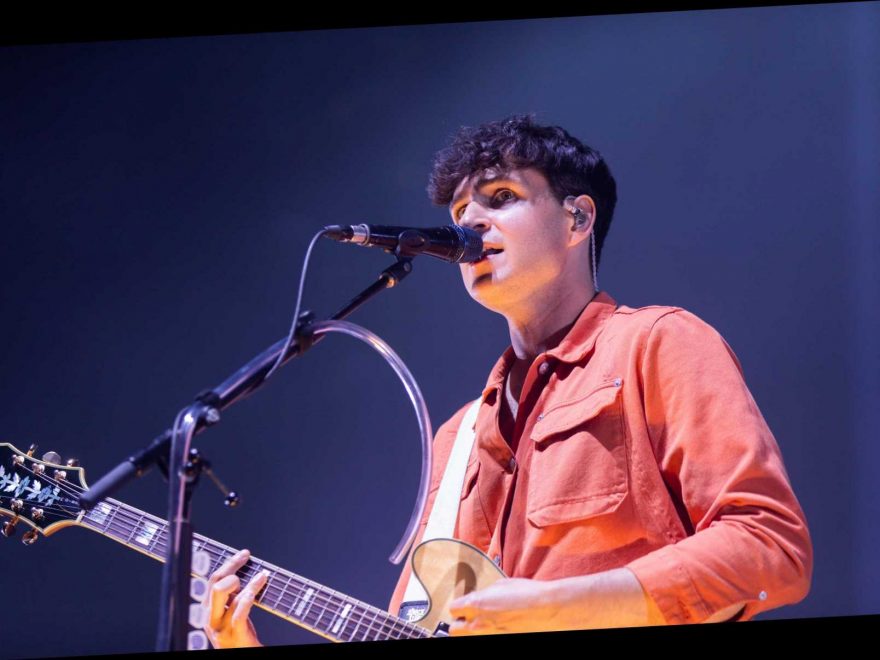 With the Iowa caucuses just days away, Vampire Weekend performed Saturday at a rally in support of Bernie Sanders.

The band showed their support for the Democratic hopeful at the US Cellular Center in Cedar Rapids, delivering a set that featured cover of Thin Lizzy’s 1976 hit “The Boys are Back in Town,” along with a career-spanning set including “2021,” “Cape Cod Kwassa Kwassa,” “Holiday” and “This Life.”

“I still believe that Bernie can win & it’s brutal seeing how much energy goes into convincing voters that one of the most popular politicians in the country (and the one who polls best against Trump) is unelectable,” Ezra Koenig wrote on Instagram earlier this week.

“I don’t feel like I’m separating my values and my pragmatism by supporting Bernie and neither do millions of others ! Anyway, Bernie’s still the landslide favorite among people 35 and under (across racial and gender lines) so talk to your older, skeptical friends and family about why Bernie can actually win.”

In the lead-up to the 2016 election, Vampire Weekend performed at a Students for Bernie rally in Iowa City, with Sanders joining the band onstage to sing “This Land Is Your Land.”

Bon Iver’s Justin Vernon played a solo acoustic set at the Horizon Events Center in Clive, Iowa on Friday night to garner support for Sanders. Vernon delivered his own renditions of two 1964 Bob Dylan tracks: “With God On Our Side” and “The Times They Are A-Changin.’”

The Bon Iver frontman also covered Leon Russell’s 1970 track “A Song For You” and performed his band’s “Blood Bank,” “Flume” and “For Emma.”

Ahead of his performance, Justin Vernon released a statement about his support for Sanders: “I believe, unequivocally, that all people deserve support, love, and the freedom to choose how to live their own lives. There are promises in our constitutional language that are being superseded by money and greed in this country; I believe that Senator Sanders is the only one that has the pedigree, the experience, the courage, and the undying spirit to begin to put these obstacles of freedom to rest.”

During his 2016 campaign, both Vampire Weekend and Bon Iver supported the Democratic hopeful and performed concerts at rallies in Iowa and New York. Vernon also endorsed Sanders during a Wisconsin rally in April 2016.

Just one day ahead of the New Hampshire primary, the Strokes will perform at The Get Out the Vote Concert Rally in support of Sanders. The event will take place on February 10th at the Whittemore Center Arena in Durham, New Hampshire.